Should I buy the Xiaomi Redmi 7A?

The Redmi 7A offers a lot of smartphone for under £100, with a decent camera, great battery life and solid speakers among the highlights.

However, there are a number of frustrations which affect everyday usage, most notably the paltry 2GB of RAM.

If you’re on a strict budget this is a good option, but we’d recommend spending just a few pounds extra to get a more complete experience.

Xiaomi has established itself as one of the most recognisable Chinese brands in Europe with a string of solid releases. While nearly all its smartphones are targeted towards the more affordable end of the market, the Redmi sub-brand takes this one step further.

But can the Redmi 7A really provide a solid smartphone experience for under £100?

The phone was only released in mid-2019, but we have already seen a successor in the Redmi 8A. Xiaomi’s aggressive update cycle means we often get multiple phones from the same line each year, so your main decision will be whether this model will suffice or you should hold out for the newer version.

This makes it one of the cheapest smartphones you can buy, undercutting all the entries in our best budget phone chart.

Comparisons will obviously be drawn with the Moto E6 Plus, one of the few phones at a similar price point. The Vodafone Smart V10 is another option, but it’s unsurprisingly locked to Vodafone.

With few other options that are this affordable, it does mean we can be a little more forgiving of features that are missing or not up to scratch.

Upon first impressions, the Redmi 7A looks like a far more premium device than its price suggests, although its design will probably transport you back in time.

The 5.45in LCD panel was considered large just a few years ago, but it’s now dwarfed by an increasing number of giant phones. The 720x1440 resolution sounds disappointing on paper, but its effect is less noticeable on this smaller panel.

There are still some fairly chunky bezels on offer here, with a 74.4% screen-to-body ratio offering much less screen real estate than we’ve become accustomed to. The brand name being emblazoned on the chin was commonplace until the quest for bezelless devices gathered pace, but it does allow the Redmi 7A to stand out more than most.

The single front-facing 5Mp sensor supports face unlock, your only biometric option for unlocking the phone.

Flipping the device over reveals an all-plastic casing, safe for a single 12Mp rear sensor. It’s refreshing to see a phone free from the crowded camera array of high-end devices, despite the obvious drawbacks. Many people may actually prefer this to the all-glass design, as it’s far more resistant to fingerprints.

Talking of fingerprints, the glaring omission is the lack of a physical sensor of any type. It’s definitely not a deal breaker at this price, but it does become frustrating to rely on the patchy face unlock or manually enter your PIN.

The only physical buttons are power and volume controls, both of which are tactile and responsive. The dual downward firing speakers don’t quite produce stereo sound, but they are a pleasant surprise. The phone also retains a 3.5mm headphone jack, something that’s becoming so rare it’s worth mentioning as a feature.

The lack of a USB-C port for charging is a strange move, particularly for a phone released in 2019. You’ll have to persevere with micro-USB for a little while longer if you choose this phone.

The Redmi 7A comes in three colours, with gold and black models in addition to the blue we tested.

One place you will see significant compromises is on internals. The Redmi 7A comes with a Snapdragon 439 processor and 2GB of RAM. While that’s fine for some basic options, it will quickly show its limitations when you try to do anything remotely complex.

However, the most noticeable limiting factor is storage capacity. The model we tested came with a measly 16GB, but we recommend everyone steps up to the 32GB variant. We started getting low storage messages after installing just a handful of apps.

It’s easy to forget that all the space taken up by apps in addition to the download size, and it left us counting every megabyte in a way we haven’t for a long time.
The good news is it supports microSD card expansion up to 256GB, but that’s a separate purchase that some people might be reluctant to make.

The storage restrictions did mean we struggled to get the benchmarks to run. GFX Bench required a 660Mb download before we could start any of the tests, meaning we had to delete a few apps to get it to work. However, after overcoming that hurdle we were pleasantly surprised by the results.

In particular, there looks to have been a nice boost in performance over the Redmi 6A, its predecessor. This suggests there will be similar enhancements if you get the newer Redmi 8A, which despite sporting the same processor has the option for up to 4GB of RAM.

The Redmi 7A comes running MIUI 11 over Android 9 Pie. Xiaomi’s skin has a very different look and feel to the stock version of Google’s software.

If you’re not familiar with the Xiaomi user interface, the Redmi 7A’s has a much more vibrant and saturated colour scheme than you might be used to. App icons are vivid and eye-catching, while the clean lines stand out as Google pursues more rounded corners.

Swiping right from the home screen displays some Google Now-style cards, although these are much less useful than you’ll find on Pixel phones.

The bad news is that MIUI comes with plenty of bloatware, with Xiaomi producing its own calculator, clock and voice recording apps. There’s nothing wrong with them per se, it just feels wholly unnecessary when Google’s apps do the job just fine.

The latest versions of Google’s operating system are usually reserved for more expensive handsets, so we’d be surprised to see it get Android 10 anytime soon.

As we mentioned previously, the absence of a fingerprint scanner means face unlock is your only biometric option. Redmi claims this is enhanced by AI, projecting thousands of tiny dots on your face to recognise you.

This makes it more secure than a standard face unlock, but does mean it’s slower than most of the alternatives. A key selling point of similar technology is the ability to authenticate payments or log in to certain apps, but that’s not possible here.

Like most Android phones, you have a choice between using on-screen navigation buttons or gestures. The latter is a nice option to have, but they don’t feel very intuitive.

The multitasking pane is another source of frustration. Your applications are displayed vertically as opposed to the regular horizontal layout, while the X at the bottom of the screen serves only to clear the cache. Sometimes this means all currently open apps will close, but its main purpose is to optimise the phone’s performance.

As you can probably tell, I’m not a massive fan of Xiaomi’s user interface. The company clearly wanted to put its own stamp on Android, but I feel that has come at the cost of the user experience.

Fortunately, the audio side is much more impressive. The Redmi 7A comes with dual downward-firing speakers, which produce clear, crisp audio. Unfortunately this doesn’t combine with the earpiece for a stereo setup, but it’s impressive at this price point nonetheless.

The aforementioned earpiece is also great for the often overlooked feature of call quality. We had no issues when making or receiving calls, with excellent clarity and plenty of volume.

Cameras are an obvious area to cut corners on budget handsets, and that’s no different here. The Redmi 7A comes with a single 12Mp, f/2.2 rear sensor.

Telephoto and wide-angle lenses have become so commonplace that its rare to see a single lens setup these days, but we probably shouldn’t be surprised on a £100 phone.

However, it does mean camera flexibility is incredibly limited. You can take software-enhanced portrait mode shots, but that’s about it when it comes to alternative modes. However, you probably won’t be buying this phone for A+ camera features..

All things considered, the 7A performs pretty well in good lighting conditions. There’s a nice balance of colours and everything in the foreground remains sharp, although it does struggle with dynamic range.

Portraits look more pleasing to the eye with the dedicated mode on, but it struggles a lot with edge detection.

The front-facing 5Mp sensor is pretty forgettable, with washed out colours and regularly overexposed backgrounds. You should probably stick to using it for face unlock and perhaps the occasional video call.

You can see what we mean in our camera samples below, which you might have to click on to view in full. 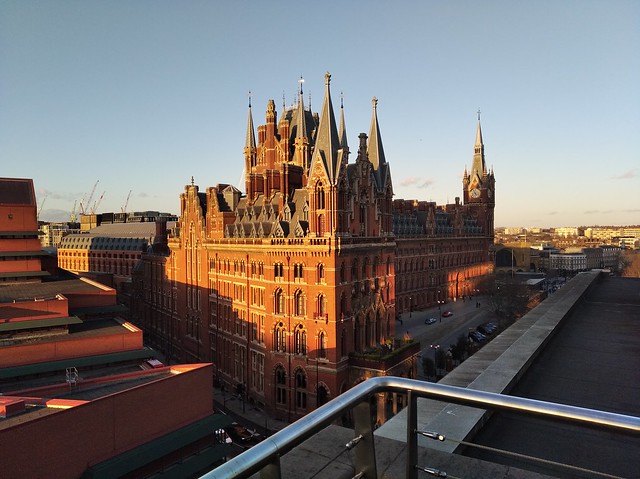 On the video side, the Redmi 7A is capable of 1080p video at 30fps. Footage looks pretty good, but using that same rear lens means there are similar limitations here.

Battery life is one of the most impressive things about the Redmi 7A. The combination of a 4000mAh capacity and low resolution display meant we easily got a day and a half of moderate usage.

The 11 hours and 9 minutes it recorded in Geekbench 4’s battery test is among the most impressive scores we’ve recorded. Standby time is also excellent, something that Android phones can struggle with when compared to iPhones.

There’s no fast charging here, so you’re limited to 10W via the included cable (no wireless charging of course!). We managed to get 27% in 30 minutes from off, so you’re looking at a couple of hours for a full charge.

The simple fact that the Redmi 7A is a £100 handset running Android 9 Pie mostly lag-free makes it worthy of praise.

Its compact size makes it easily pocketable, while the display, battery life and speakers are all better than you’d expect at this price point.

However, the frustrating experience sets in when you try to download all your regular apps, with the 16GB of storage a serious limitation. 2GB of RAM also simply isn’t enough for anything remotely complex.

The dearth of compelling alternatives around £100 makes this worth considering, but we’d recommend paying just a little bit extra to get a more complete smartphone experience.