Should I buy the Xiaomi Poco X3 Pro?

The Poco X3 Pro is for Android gamers or power users on a budget, with near-flagship processing power in one of the cheapest phones on the market. It's big, it's bulky, and the camera's not great - but it’s still astonishing that Xiaomi has pulled this off.

The Xiaomi Poco X3 Pro is essentially an updated version of 2020’s excellent Poco X3 NFC. It’s almost exactly the same as that phone, in fact but slightly rebalances its specs to include an even more powerful processor and a few other upgrades, while compromising a touch on the camera side.

The X3 NFC was our favourite budget phone of 2020, and the Pro is a better phone in enough areas to make it an easy recommendation too.

It might be more polarising than its predecessor though, doubling down on that phone’s strengths without improving on its weaknesses. More than ever this is a phone about pure power, delivering the best performance you could ask for at the price, but rivals are often slimmer, lighter, and take better photos.

Design is one of the areas where essentially nothing has changed from the original X3 NFC aside from a new set of colours.

That means the same set of problems, unfortunately: the X3 Pro is big, with a 6.67in display; it’s bulky, at 9.4mm thick and 215g; and it’s pretty ugly with an enormous Poco logo emblazoned across the backside.

It’s not all bad though. The IP53 rating returns, giving the phone pretty respectable dust and water-resistance for a cheap phone - even with a headphone jack included - while an upgrade to Gorilla Glass 6 should make the display a bit more durable. The frame is still built out of aluminium, with a plastic back – and this is one of the phones where it really does feel plasticky.

There are three colours to pick from. Phantom Black (pictured) is a dark finish with subtle blue and orange hues running through it, while Metal Bronze and Frost Blue are a little more does-what-it-says-on-the-tin.

The new finishes are welcome, but ultimately the design is still the biggest problem with the X3 Pro. It’s heavy, it’s thick, and thanks to the Poco logo and plastic finish it both looks and feels kind of cheap. It’s not awful, but there are similarly priced phones from Realme and Oppo – and even Xiaomi’s other phone lines – that look an awful lot slicker.

The screen is a pretty clear strong suit here, so long as you’re happy with the fact that at 6.67in it is pretty large.

This is an LCD panel, rather than OLED, with an FHD+ resolution of 2400x1080. It supports a 120Hz refresh rate however, and 240Hz touch response rate, both of which will hold immediate appeal for anyone who games a lot on their phone.

Even better, the refresh rate can dynamically switch between five speeds, from 30Hz up to 120Hz, meaning that when necessary the screen can run a little slower to save the battery.

The display is bright and punchy, with vibrant colours. You won’t get the great contrast or colour depth that OLED can deliver, but the tradeoff to deliver a higher refresh rate at this price is a smart one for the X3 Pro’s potential buyers. As with the rest of the phone, this is a choice that prioritises pure performance and gaming prowess over niceties like pro-grade colour accuracy.

Now we’re getting to the meat of what makes the Poco X3 Pro what it is: the core specs.

The X3 Pro was announced alongside its chipset, which debuted here: the Qualcomm Snapdragon 860. This is a souped up version of the Snapdragon 855, which is the chipset that powered most of the biggest flagship phones in 2019.

Two years on you might think it would show its age – and in only supporting 4G, rather than 5G, to some extent it does – but even older flagship silicon is still faster than this year’s mid-range chips.

In benchmarks this is neck-and-neck with last year’s Galaxy S20 phones, and not far behind Snapdragon 865 phones like the OnePlus 8T or this year’s 870-powered Moto G100 – which costs more than twice as much. Compare it to the Poco X3 NFC and I saw a 50% improvement in the CPU-focussed Geekbench test, and more than 100% improvement in framerates in the graphics-heavy GFXBench tests.

Poco pairs the Snapdragon 860 with the choice between 6GB or 8GB of RAM, and 128GB or 256GB of storage – though there’s also a microSD slot to expand that further. Storage aside, I’d recommend the RAM boost if you can afford it – the price difference in the UK at least is only £20, and the long-term performance gains and future-proofing should make that well worth it.

Benchmarks are only one thing of course, but in daily use the X3 Pro proves its worth. This is the fastest, smoothest budget phone I’ve probably ever tested – if the design didn’t give it away, you really would think this was a high-end piece of kit. I have suffered very occasional stutters, and one app freeze, but I’ve been reviewing the 6GB RAM model – I suspect the 8GB models would even avoid those minor wobbles.

If there’s a trade-off to using the older flagship silicon, it’s in networking. I’ve already mentioned that this is a 4G phone, not 5G, but you also miss out on the newer Wi-Fi 6 standard. Even Bluetooth is limited to the older 5.0 standard – actually a downgrade from the Bluetooth 5.1 in the X3 NFC, and two generations behind the current 5.2 standard. That means no support for Bluetooth Low Energy Audio, which might impact headphone battery life and some other features, though this shouldn’t really be a dealbreaker for anyone.

As for security, a fingerprint scanner is built into the power button along the side of the phone. This might not have the sex appeal of an under-display scanner, but the physical versions remain faster and more reliable for the most part – this one included. You can also always use the selfie camera for a less secure 2D face unlock.

Speaking of – the cameras are the only part of the Poco X3 Pro that’s a fairly clear downgrade from the X3 NFC.

The rear setup is broadly similar, but differs in the details. You get four lenses, but two of them are both 2Mp: a macro lens and depth sensor. The other two are a 48Mp main camera (down from 64Mp) and 8Mp ultra-wide (down from 13Mp).

The main camera isn’t bad, to be fair. The lower resolution and smaller sensor size are counteracted slightly by an improved f/1.8 aperture, and in daylight the results are honestly pretty great. There’s no optical image stabilisation (OIS), so you’ll get a touch of hand-shake, but colours really pop, and a 48Mp sensor is still enough to pack in tons of detail. 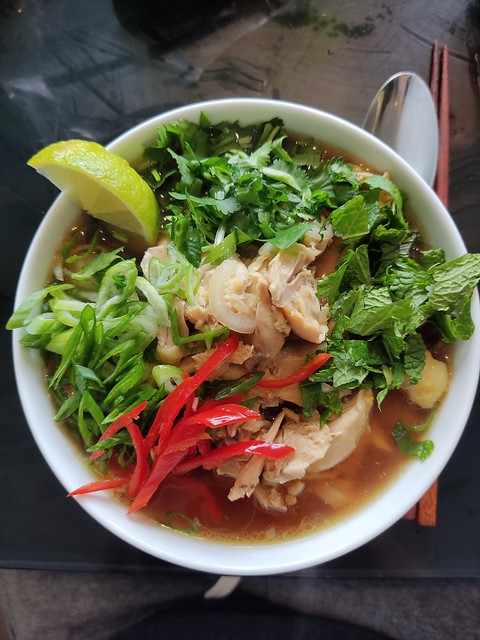 It’s in low light that the main camera shows its limitations, with washed out colours and reduced detail and sharpness. Photos are still usable for sure, but no longer quite so Insta-ready. Night mode helps, but results are still below what other comparably priced phones are capable of.

The ultrawide is more frustrating. Even in good light shots look a little soft, with severely reduced detail and faded colour compared to the main lens. In low light this only gets worse, with white balance and exposure problems thrown into the mix. Frankly, in low light this wide-angle camera sucks.

The selfie shooter is also pretty basic, but gets the job done. At 20Mp it can produce fairly detailed shots, but the f/2.2 aperture and tiny sensor once again see it struggle outside of really optimal lighting conditions.

All of this is basically par for the course for cheap phones of course. The X3 Pro doesn't have a versatile camera, and performance will drop fast outside of good light. But if you just need a decent point-and-shoot that’ll cover your holiday snaps and Instagram stories, this is good enough. Just know that other brands in the budget space, like Realme or Oppo, put a little more work into their snappers.

The 5160mAh battery here is pretty considerable, and plays a part in how hefty the overall phone is. In benchmarks it actually lasted a few hours less than the X3 NFC, despite identical battery capacity – perhaps the trade-off of a more power-hungry processor.

Despite that, in actual use this still offers excellent longevity. With lighter use I’ve managed to get two full days out of the phone between charges, and heavier users and gamers should have no problem stretching it out to fill the day.

At 33W the USB-C charging isn’t the absolute fastest around, but it’s still pretty nippy. 15 minutes was enough to top the phone up by 28%, with half an hour netting me 58% - easily enough for a full day’s use based on my habits at least.

There’s no wireless charging, but that’s really no surprise given the price.

The X3 Pro ships with Android 11, running Xiaomi’s MIUI 12 skin by default. Xiaomi hasn’t promised any specific number of system updates for the phone, but based on the company’s track record it’s likely to receive the next two Android version updates.

There’s still a lot of variation between Android skins, and I have to admit that MIUI remains one of my personal least favourites. The busy, colourful UI makes system settings a chore to navigate, and a confusing layout means individual settings options never seem to be where you expect them to be.

Once you figure out how everything works there is at least plenty of customisation, but there are still confusing limitations here. The ‘floating windows’ feature, for example, lets you drag notifications down to open apps in their own mini-tab on-screen. This is all too easy to activate when you simply want to open a notification, it’s all too difficult to close the floating window and get back to what you were doing, and it’s frustratingly impossible to simply turn the feature off entirely.

The bottom line is that this isn’t the best Android experience out there, but it’s ultimately a matter of taste. It is also running the latest software version and should do for another year or two.

Both versions are already discounted on the official Xiaomi store and Amazon, so you could save £20/€20 on that official price.

It's roughly the same price as the X3 NFC - making it a no-brainer over that phone, unless you see it heavily discounted. We're rounding up the best deals we see on both Poco X3 models, so check that article for the latest savings. Other good options at a similar price are the Realme 8 or Oppo A9, but check out our full budget phone ranking for other top picks.

The Poco X3 Pro is a phone designed for Android gamers or power users on a budget, though it might also appeal to those who want to go big on specs in order to futureproof their phone.

If pure performance isn’t your priority, then you can find phones that are slimmer and lighter, with better camera performance, for around the same price.

What you won’t find is any phone that can match this pound for pound right now. This is near-flagship processing power in one of the cheapest phones on the market, and it’s almost ludicrous that Xiaomi has pulled it off.