Should I buy the Nubia Red Magic 5G?

The Red Magic 5G probably doesn't have mainstream appeal, but a buttery smooth 144Hz display and stellar performance make it one of the very best gaming phones you can buy.

Red Magic, the gaming arm of Chinese company Nubia, has been turning heads in recent months with a number of phones optimised for mobile gaming.

Its upgrade cycle is more aggressive than most, churning out three phones in 2019 alone.
But while the most recent of these, October’s Red Magic 3S, was perhaps an iterative upgrade, its successor is anything but.

The Red Magic 5G makes history as the first smartphone sporting 144Hz refresh rate. Combining this with 5G connectivity gives a significant boost to performance, but can a £539 phone really stake a claim to be the best gaming handset on the market?

Let’s not beat around the bush. If you’re considering buying this phone, you’ll want to know what it’s like when playing graphic-intensive games.

Now I might not be the target market for this phone, but I can easily appreciate what the 144Hz refresh rate display brings to the experience. The 90Hz panel on the Red Magic 3S was hardly a slouch, but this turns everything up a notch.

It doesn’t feel like an overstatement to say this is the closest thing to console gaming I’ve seen on a smartphone. This is aided by the class-leading Snapdragon 865 chipset, alongside 8 or 12GB of RAM. The latter usually feels like overkill on a smartphone, but it’s nice to be able to call on it if needed.

However, as the only phone with a 144Hz display at the time of writing, there are understandably only a handful of games that currently support this refresh rate.

The main two at the moment are Real Racing 3 and Arena of Valor, which provide two very different but equally impressive experiences. The smoothness gives you a feeling of more control, which could make the difference when competing with other online players.

Do be aware that the built-in fan will probably kick in when playing, but that’s what it’s there for. The Red Magic 3 was the first phone to come with this feature, and it’s only available on a few phones to date. The benefit here is clear, with the phone never getting more than slightly warm, even when operating near its maximum capacity.

This and the refresh rate can be toggled via Game Space, which allows you to maximise your gaming experience and minimise distractions. A selection of the games you have installed can be cycled through on this screen, which is activated via a dedicated slider on the side of the phone.

There are other hardware features specifically targeted at gamers, but just make sure you are using it with the text facing upwards. This allows you to make use of the shoulder triggers, which add timely vibrations in the same way you might get on a console controller. You’ll also find a smart connector, which is compatible with a host of accessories from the Red Magic website.

I was playing on a fairly steady Wi-Fi connection, and didn’t get the chance to test out its 5G capabilities. The Red Magic 5G is compatible with both mmWave and sub-6 standards, as well as supporting all the UK providers.

This and the high refresh rate are designed to work in tandem to provide a stellar gaming experience on the go, but the limited 5G coverage in many countries means this still feels a bit ahead of its time.

On the front, you get a 6.65in, 2340x1080 OLED panel, free from any notch. While it’s slightly disappointing not to see a higher resolution, the more significant detail with regards to gaming is its support for the P3 colour gamut. This is becoming increasingly popular on smartphones, and allows for a rich, dynamic colour scheme.

The other main hardware choice is the move to an in-display fingerprint scanner. This is an optical sensor, as opposed to the ultrasonic technology used on the latest Samsung phones.
This was very hit and miss in my experience, as it felt like I always had to place my finger in the perfect position for the exact right amount of time or it wouldn’t recognise me. I ended up entering my passcode countless times as this quickly became frustrating.

The storage options are fairly standard for a mid-range smartphone, with a choice of 128GB or 256GB. I’d have liked to see support for expandable storage via micro-SD, particularly when so many budget handsets offer the feature as standard nowadays.

In the camera department, a main 64Mp Sony sensor is joined by 8Mp wide-angle and 2Mp macro lens. On the front, we also get an 8Mp selfie camera, although this doesn’t support face unlock. More on those later.

There’s a lot more going on around the sides of the phone than you might usually expect. In addition to the aforementioned slider for the Game Space, the Red Magic 5G has four speaker grilles, all of which are capable of outputting audio in a stereo setup. This means there’s absolutely no risk of blocking the audio when immersed in games.

As a result, the power key and volume rocker are slightly further down the phone than is natural, meaning I had to adjust my grip in order to reach them.

As expected, there’s a USB-C port for charging and data transfer, while Red Magic has stuck with a 3.5mm headphone jack (hurrah!). As good as the speakers are, it’s nice to connect your own headset for the absolute best possible experience.

I tested the Eclipse Black version that we’ve seen on previous models, which manages to be eye-catching without the colours looking too garish. It’s also impressively resistant to fingerprints, despite sporting an all-glass design.

Finally, is it really a gaming phone without some RGBs? The Red Magic 5G has light strips around the edges of the display, while the logo on the back can also light up as a notification LED.

I’ve mentioned a lot of the internals with respect to gaming, but they also come into their own in general usage. The higher refresh rate display is especially noticeable on endless scrolling apps such as Twitter, with the ability to load new content unrivalled on any device I’ve tried so far.

The performance boost is best illustrated through benchmark comparisons, which show just how much of an improvement the phone is over even the Red Magic 3S.

Usually I’d say how these tests aren’t necessarily reflective of real-world performance, but the graphic intensive videos used by GFXBench are exactly what you’d expect from the most demanding mobile games.

Nubia’s skin has typically been fairly light, but it has become more streamlined in a visual redesign.

For me this is the old adage: “if it ain’t broke, don’t fix it”. There was absolutely nothing wrong with the software on previous Red Magic phones, but the 5G has a number of quirks which cheapen the experience slightly.

You are now encouraged to use a gesture-based navigation system, but this is far from intuitive. The omnipresent bar at the bottom of the screen reminds me of recent iPhones, but it feels clunky when compared to Apple’s implementation. A key example of this is swiping from the left edge of the screen to go back, which can be difficult when handling such a large phone.

There’s also plenty of bloatware, with many of these apps offering a less polished experience than you get on stock Android. Notable examples of this include Phone, Clock and NotePad, all of which feel unnecessary when Google’s apps are so capable already.

The notification bar also has a habit of disappearing, particularly on the home screen, although that might be due to me running an early version of the software.

Unlike on many Android phones, the Red Magic 5G doesn't allow you to install a different launcher, so you're stuck with this one.

Cameras are an often overlooked aspect of gaming phones, but they remain crucial to a complete smartphone experience, and I’m pleased to report there’s some nice improvements here.

The 64Mp main camera is supplemented by 2Mp macro lens and 8Mp ultrawide.
Curiously, the latter is only accessed through the Pro mode.

Regular shots have a nice level of detail and solid dynamic range. They have a tendency to be highly saturated, although that does mean they look pleasing to the eye.

The 8Mp selfie camera produces a good level of detail, although the background regularly ends up being overexposed.

You might notice that images come with a Red Magic watermark by default, but that can easily be turned off in settings. 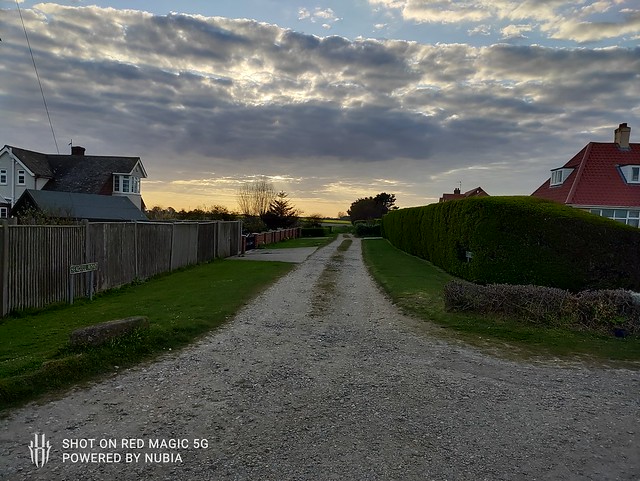 The Red Magic 5G comes with a 4500mAh battery, which on paper seems like it will do just fine. While that’s true while on 60Hz and 90Hz, it’s the most notable drawback of the 144Hz display. The battery drains significantly more quickly when on the maximum setting, despite some relatively aggressive software optimisations to improve. However, this turns excellent battery life into something more average, with a recording of 8 hours and 26 minutes in Geekbench 4’s battery test.

This is offset somewhat by the phone’s support for 55W wired charging, although to take advantage you’ll have to buy a separate power adapter. The one in the box is only capable of 18W, but we did manage 35% in 30 minutes from off.

The most significant missing feature on the phone is wireless charging. That’s by no means at dealbreaker considering everything else that was on offer, but it would have been nice to have.

Both versions are available to order now from the Red Magic website, having officially been sale since 21 April.A 12GB/128GB Eclipse Black model is also now available, although the website is currently reporting shipping times of 10-12 days.

A 12GB/128GB Eclipse Black model is now available, although the Red Magic website is currently reporting shipping times of 10-12 days.

At this price, it undercuts many premium gaming handsets, including the Asus ROG Phone 2 and Razer Phone 2. In truth, there are very few compromises when compared to those two phones and the others in our round-up of the best gaming phones.

The fact that this is a great phone today and is well future-proofed with full 5G support makes it extremely good value for money.

The Red Magic 5G is undeniably one of the best gaming phones on the market. Its 144Hz display and stereo speakers are among the best in class, while the camera has seen a nice upgrade over the Red Magic 3S.

The phone is targeted squarely at mobile gamers, and as such some aspects are less well suited to the mainstream market. These include an imposing industrial design and some unimpressive software tweaks - the frustrating in-display fingerprint scanner chief among them.

All things considered, however, the Red Magic 5G offers everything budding gamers are looking for at a price that makes it hard to resist.