Should I buy the Xiaomi Pocophone F1?

The Pocophone F1 is an outstanding phone in various ways. Most notably, the way it offers a premium set of specs for a frankly outrageous price.

It's one of the cheapest phones around with the flagship Snapdragon 845 processor and also has a large battery, decent cameras and plenty more. All this comes in an attractive design, even if it isn't the most svelte around.

It’s no mystery, thanks to the internet of leaks and teasers, that Xiaomi has been working on a new phone but with a new brand name. Well the Pocophone F1 is now official and here’s our full review of the bargain smartphone.

It might seem like Xiaomi is following in the footsteps of Honor which is sub-brand of Huawei, but Jai Mani, Head of Product at Pocophone, tells us that’s not the case here. The phone doesn’t have a Mi version it’s based on and the link to Xiaomi is no secret. Mani says it’s like being a startup but without all the big issues new tech companies face.

You can get the Pocophone F1 in the UK for £329 from Amazon with the 128GB only £20 more. You can buy it cheaper at £263 at GearBest, but when you factor in the possibility of import duty (20% of the value on the shipping paperwork) the difference may not be so great.

The phone is now on sale globally and is available from sites including from Mi.com and Flipkart.

Globally doesn't simply mean it's on sale in every country around the world though. You can check the where to buy page.

When you consider the specs you’re getting here, this is an amazing price. The F1 is one of the cheapest phones around with Qualcomm’s flagship Snapdragon 845 processor.

With the notch at the top of the screen, the Pocophone F1 looks like many other devices on the market in 2018. There are a few things that make it stand out, though.

You can’t see it but the device has a liquid cooling system similar to the Galaxy Note 9. “As the CPU heats, fluid inside the cooling module evaporates to vapour, moving to the cooler end, where it re-condenses as liquid.” This is much like a gaming laptop, but without fans.

We like the rounded rear cover and although the phone is 9mm, the way the screen sort of sticks out the front means you only really feel the rear section when holding it so it feels a lot thinner than it is. It just look a little odd - perhaps a bit old school - from the side.

You can see the ‘Armoured Edition’ in our photos - reminiscent of old Motorola phones that used Kevlar on the back - but the regular F1 comes with a polycarbonate rear cover instead. They come in various colours, look like metal and have a matt finish.

As mentioned earlier, it’s no secret that Pocophone isn’t it’s own thing. That’s why the subtle words ‘by Xiaomi’ are printed on the back of the device.

One advantage of the Xiaomi backing is that customers can get customer service at official centres. The phone seems pretty solid to us and there’s a silicone case in the box but breaks still happen.

So the Pocophone F1 is one of the cheapest phones you can buy with a Snapdragon 845, but what else has it got? Well, there’s lots of interesting things to tempt you here.

The notch is here to stay it seems, although we’re sort of hoping it’s a passing fad, and the F1’s is quite sizable. There’s only room for three icons on one side like the iPhone X.

It’s bright, colourful and with good contrast too. The aspect ratio is an odd 18.7:9 but basically means it’s really tall like so many phones this year.

There are on-screen navigation buttons but you can switch them off and go full gesture based if you like, meaning a bit more real estate for other things.

This area is often pretty boring, especially for non-enthusiasts. However, it’s a standout area for the Pocophone F1.

That’s because you get an amazing set of core specs normally only found on phones twice the price. As mentioned, there’s the Qualcomm Snapdragon 845 flagship processor and at least 6GB of RAM.

The LiquidCool system similar to the Note 9 mentioned earlier means the phone can run at sustained peak performance, according to the firm.

You can then choose 64- or 128GB of storage and there’s a microSD card slot for adding up to 256GB more. If that isn’t enough you can opt for a model with a whopping 8GB of RAM and 256GB of internal storage.

That last one matches the incredible OnePlus 6, but that phone doesn’t have expandable storage.

After some trouble, we've managed to run our benchmarks and the Pocophone is very impressive across the board. As you can see, we've compared it to a phone of a similar price as the Moto G6 Plus and it blows it out of the water.

Comparing it to much more expensive phones is also interesting. It keeps up with and often beats the OnePlus 6 which is still a great value phone, and even the Galaxy Note 9 which is one of the most expensive phones this year.

Back in the real world, we've found performance to be smooth. Only occasionally does the phone lag and it's rare.

The high-end specs continue with dual-band 11ac Wi-Fi, Bluetooth 5.0 with aptX HD, GPS and a USB-C port. NFC appears to be market dependant - our sample doesn’t have it.

If you don’t need use the microSD card slot, then the Pocophone F1 is dual-SIM.

Although there are speaker grilles either side of the USB port, only one of them is actually the speaker. Audio quality is pretty impressive with plenty of volume on offer without to much distortion. A small amount of sound also comes out of the earpiece at the same time.

The Pocophone F1 has a super fast fingerprint scanner on the rear and you can also use face unlock as well if you like. Thanks to an IR scanner, it promises to work in all conditions. We’ve not been able to test it as it will come later as a software update.

We’re used to dual cameras on mid-range and even budget phones now, but they’re not always as good as they’re supposed to be. The Pocophone F1 has 12Mp and 5Mp rear cameras at the rear with the main sensor the similar to the Mi 8. It’s got an aperture of f/1.9, large 1.4μm pixels and Dual Pixel Autofocus.

The second sensor is for depth effect and we’re impressed by the bokeh on offer here (apart from the watermark but you can turn that off). The phone also has a AI mode in the camera app that aims to detect what you’re shooting and make adjustments. Sounds like the traditional auto mode really.

At the front is the same 20Mp camera found on the Mi 8 with an f/2.0 aperture and Super Pixel technology which combines the detail of four pixels into one helping reduce noise and increase quality. What we can say it that the camera can take great shots, but many come out blurry if your hand isn’t steady enough.

In terms of video, the phone can shoot up to 4K at the rear and 1080p at the front. There are also other modes including time lapse and slow motion. There’s also a short video mode that records for 10 seconds - we assume this is for apps like Snapchat and Instagram.

Check out our samples photos below. Generally we're very impressed, especially considering the price. The main issue is the colour accuracy in the macro shot. 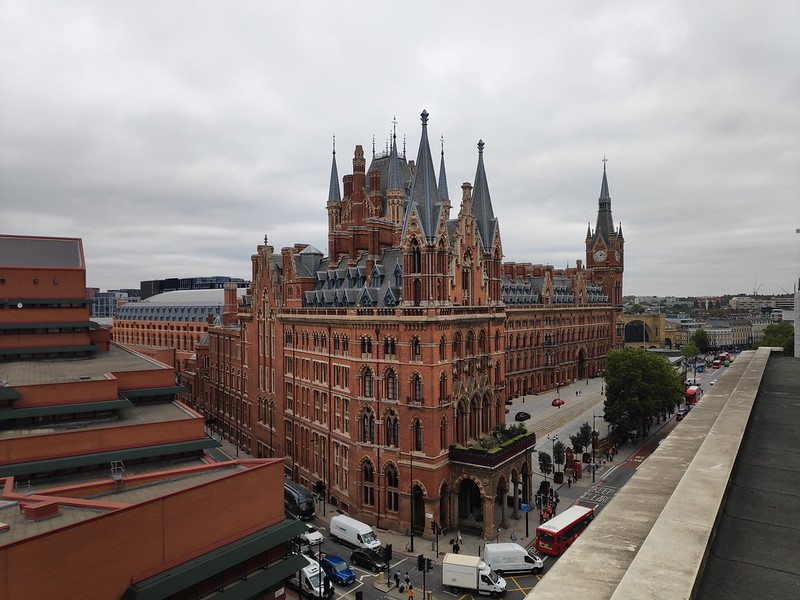 The Pocophone F1 might weigh 180g but for those of you wish for a slightly thicker and heavier phone if it means better battery life then rejoice.

There’s a 4000mAh battery here which is around a third more than the average in the phone market. This will last even fairly heavy users a day and lighter users could get a couple of days before charging.

Inside the battery section of the menu is a little complex but there are handy features beyond your usual battery saver. The software can tell you what specifically is using power and indicate how many extra minutes you’ll get by sorting it out - whether it’s killing an app or switching off GPS.

There’s no wireless charging here, of course, but you can top up via the USB-C and benefit from Qualcomm Quick Charge 3.0.

In our battery test using Geekbench 4, the Pocophone F1 manage a decent seven hours and 47 minutes. It's nothing mind blowing, but as we said some users will get beyond a day of real-world usage.

Although the software is based on MIUI 9.6, the F1 has its own Pocophone launcher, so it's 'MIUI for Poco'.

We’ve not always been a fan of MIUI, perhaps being used to rivals aimed at the western market but things have improved. The Pocophone F1 is easy enough to use and looks quite stock in design.

We’re particularly pleased with a much better notifications and settings panel but the settings menu can be something of a maze at times.

An interesting feature you’ll probably love or hate is being able to group app icons by colour. It might sound odd but without even knowing it you brain is likely to be able to find the one you’re looking for based on the colour - until the icon gets redesigned.

There’s not much bloatware in terms of third party apps - there are Google and Microsoft apps - but there are plenty of additions like a screen recorder, FM radio and the MIUI Forum.

A hub like area similar to the OnePlus Shelf sits a swipe away from the homescreen. Here you can view shortcuts, notes and calendar events. It’s customisable if you feel like tweaking it.

We're really impressed with what Xiaomi has done with the Pocophone F1. It's an outstandingly well specced device with an astonishing price tag.

It might not be the thinnest or lightest phone around but that doesn't matter here. You get flagship specs including a Snapdragon 845 processor, up to 8GB of RAM and 256GB of storage. Furthermore, a 4000mAh battery and decent cameras.

The only real issue, like other Xiaomi devices, is getting hold of it in the UK.