Should I buy the Moto E5 Plus?

Budget phones don't often come in a plus model offering a bigger screen and larger battery, but the Moto E5 Plus ticks both these boxes and at a price tag under £150.

What's also impressive is that you get Moto G design and some other handy features including a fingerprint scanner. The downside is that performance is a bit laggy, so it might be worth jumping up to the G6 Play.

Motorola’s 2018 lineup of phones is vast including no less than six across the G and E ranges. They’re all very close in price so it’s easy to be tempted by the next one up. Here we review the most expensive in the trio of budget E phones, the Moto E5 Plus.

We’ve already reviewed the regular Moto E5 which we dubbed the best phone under £150, but should you spend a little more to get the Plus model? Read on to find out.

Moto E5 Plus: Price and availability

We gave the Moto E5 the above accolade and it’s not even close to the price limit at just £119. The E5 Plus, though, is pretty much bang on at £149. So one question we’re looking at how it compares. You can buy it from Amazon and Very.

Confusing things a little is the fact that the Moto G6 Play (the cheapest in the G range) is £169 which isn’t much more.

In the US, the phone costs $179 and you can buy it from the likes of Sprint, Cricket and T-Mobile.

Moto E5 Plus: Design and build

Motorola is sticking with its design language in general and it’s fairly recognisable. Across the range, the firm has gone with the on-trend tall displays, but there are still reasonable bezels above and below the screen.

It’s impressive that the E5 Plus feels just as premium as the G6 range with a similar style to the back including a fingerprint scanner complete with ‘M’ logo, and an attractive camera surround.

The Plus model is where the E5 jumps to a glass rear cover. It might look more eye-catching and premium compared to the aluminium backed E5, but it does make it more slippery and shows up fingerprint marks more.

We like the rounded sides on the back that help it feel nicer when holding the phone. However, this is a 9.4mm thick and 197g handset so it’s not the most svelte around. There’s a pretty good reason or two for that which we’ll explore later.

It’s worth noting that although it looks like the G6, the E5 Plus doesn’t have a water repellent coating.

Moto E5 Plus: Specs and features

Being a Plus model might mean the phone is on the unwieldy side when it comes to design but it has things in the hardware department that, for some, will make it well worth while.

The display is one of the main reasons to get the E5 Plus as it’s the biggest Motorola around. At 6in, it’s even bigger than the 5.9in G6 Plus. If it’s the most amount of real estate you’re looking for then this is it.

It’s essentially the same screen as the E5 and G6 Play only bigger. So it’s an IPS LCD panel with a 720 x 1440 resolution, so that’s HD+ to create an 18:9 aspect ratio as so many phones offer now. Motorola calls it Max Vision.

Unlike the E5 Play with its disappointing screen, the Plus is bright and colourful. The pixel density is lower than the other Motos we’ve mentioned but not enough compared to the closest in price to make a difference.

The large size is great if you want to do things like watch videos or use two apps at the same time. Like other Moto phones, you also benefit from Moto Display which gives information at a glance.

The E5 Plus falls down a little here as despite the price jump from the regular model, you still get a fairly basic Qualcomm Snapdragon 425 processor. The phone also comes with 2GB of RAM which isn’t much. A 3GB version is market dependent.

That comes with 16GB of storage which is fairly normal for a budget phone. If you can find the 3GB RAM model then you’ll get 32GB of storage. Either way, there’s a microSD card slot for adding up to 256GB.

Performance is one of the worst thing about the Moto E5 Plus as there is noticeable lag, even when swiping between homescreen panels and then opening various apps. Oddly, we didn’t find the regular E5 this bad.

It’s certainly not the end of the world, and a phone under £150 isn’t going to be lightning fast. This is one reason to jump to the G6 Play as it has a higher grade processor. You’ll notice the E5 Play benchmarks better in some tests, which is due to its lower screen resolution.

As with most budget phones, there’s not much to say in this section. You get basic single band Wi-Fi, Bluetooth 4.2 and Micro-USB. It’s a shame to see no NFC, which the single SIM E5 has so bear this in mind if you want to use the phone for contactless payments and the like.

A boon for some users is the ability to have two SIM cards at once, and this is without having to take up the microSD card slot which is unusual.

In terms of audio, you get a basic speaker and a headphone jack but we’re not complaining since the latter is becoming more and more rare.

As mentioned earlier, there’s a fingerprint scanner on the back of the phone. It works accurately and fairly quickly, too. You can use it to unlock the phone without having to press the power button first.

At the back, the Moto E5 Plus has the same camera as the E5 and G6 Play. It’s 13Mp with an f/2.0 aperture, phase detection auto focus and HDR. However, it also has a laser autofocus too which you don’t even get on the more expensive G6 Play.

We did find focusing to be nice and quick an in general, the E5 Plus is capable of taking some decent shots you’d be happy to share on social media. This wasn’t the case for phones under £150 too long ago.

As you can see in our gallery below, the results in decent lighting are good. The phone doesn’t cope with low light, though, as you might expect. Video is nicely detailed but not stabilised well so you’ll be better off shooting videos without moving the device.

At the front is a 5Mp camera which will take half decent selfies outdoors but prepare yourself for grainy shots inside, or dare to use the front facing LED flash. Jump to the G6 Play and you’ll get an 8Mp selfie camera as well as extra features such as colour spot and slow motion video. 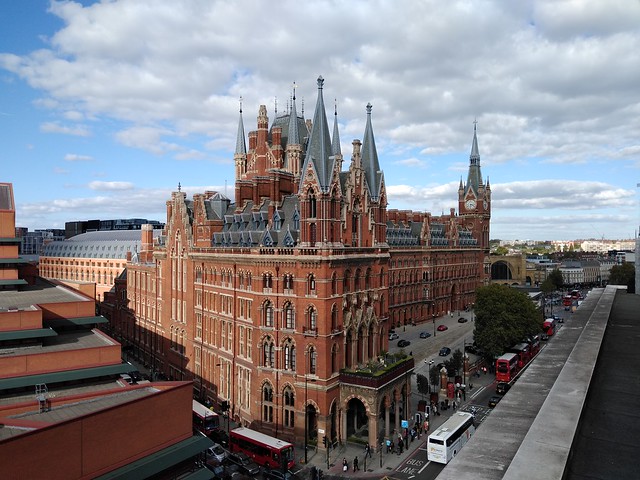 The second indication that this is a Plus model, after the screen, is the impressively large battery. Some of Motorola’s other phones already have an above average 4000mAh cell, but the E5 Plus pushes things to a whopping 5000mAh.

In our battery benchmark which is a worst case scenario, the E5 Plus lasted 11 hours and 22 minutes. That’s far more than most phones on the market with the vast majority struggling to get close to 10 hours.

Motorola touts a 1.5 day usage but we think that some users will get a full two days worth out of the phone - with light usage, of course.

There’s no Turbo Charging like on the G6 phones but you get a Rapid Charger which can get the E5 Plus to 22 percent in 30 minutes. It doesn’t sound great, but bear in mind the capacity of the battery.

Moto E5 Plus: Software and apps

The Moto E5 Plus comes with Android 8.0 Oreo, which is no longer the latest version but 9.0 Pie is still fresh and the phone should get an update at some point.

As usual, Motorola goes with a vanilla Android experience so doesn’t add to or mess with the user interface much. The main addition is its Moto app which contains a bunch of useful things.

It makes suggestions such as freeing up space as well as offering Moto Actions and Moto Display. The former allows you to do things quickly with gestures, although some like opening the camera and switching the torch on are reserved for the G6 phones.

The Display section allows you to see notifications on the screen when it’s off, keep the screen on while you’re looking at it (negating the time out) and adjust to warmer tones at night.

It’s a shame that after years of being used to a stock experience, Motorola now adds Outlook and LinkedIn. It is only those two, so there’s far worse out there but you can’t uninstall them even if you want to.

If you’re looking for a big and bold phone for under £150 then the Moto E5 Plus fits the bill with it’s towering 6in screen and whopping 5000mAh battery.

It’s impressive how nice the phone looks and feels considering the price and the size and weight will be worth the sacrifice for these features. It is a shame there’s no NFC here but it’s a minor omission.

The main downside is the slightly laggy performance so jump up to the G6 Play if this will get on your nerves. It still has a large screen and battery, plus the benefits of a better processor and front camera.