Should I buy the Huawei Mate 20 X?

With a bigger screen, bigger battery and smaller notch than the Mate 20 Pro, the Huawei Mate 20 X also has the same camera set up and adds a headphone jack. If you want the most screen possible, it might be for you.

You lose the curved display, wireless charging, full water resistance and secure Face ID but for many that won’t matter if a huge display, outstanding camera and great performance are top of your list. If you want a normal size phone, get the Mate 20 Pro.

Even though Huawei keeps making excellent premium smartphones, the company as a whole is in a bit of a corporate nightmare. With a full US ban on sales of its phones (although you can import them), the furore surrounding the company might make you want to steer clear despite the current lack of evidence that its network equipment is a back door to your data.

Placing the uncertainty to one side for a phone review is what we’ll do here though as Huawei’s smartphone division is firing on all cylinders. The Mate 20 X is a huge smartphone that sits alongside the Mate 20 Pro and Huawei Mate 20 as a premium, well-built device in a range that offers three phones depending on your taste.

The Mate 20 X is as good as the other two Mate 20 phones and is a rare case of being one of three phones in the same series that genuinely offer three different experiences. Huawei pushes the X as a gaming phone, but really it isn’t that specialist.

It is enormous, though.

The Huawei Mate 20 X is £799 in the UK from Carphone Warehouse, though it doesn’t offer contract options and is only available as an unlocked handset SIM-free.

This parks it firmly in the high-end at the same price as the Samsung Galaxy S10 and £50 more than the iPhone XS, two of the best phones out there.

A 5G version of the Mate 20 X is also available - in the UK you can pick it up from Three, Vodafone, or EE - though it will cost more than the 4G model, and plans may be more expensive too.

The Mate 20 X is a veritable surfboard with a trouser-busting 18.7:9 7.2in OLED display that looks sensational but is capped at 1080p FHD+ resolution compared to the 1440p 2K of the Mate 20 Pro. You can granularly control the colour mode and temperature and ‘hide’ the notch in the settings.

You’ll get better screen clarity and brightness from the Galaxy S10 Plus but the Mate 20 X holds its own with with good colour reproduction and viewing angles, plus the lower resolution paired with the enormous 5,000mAh cell means battery life is truly exceptional.

The phone fits in the front pocket of most deep male jean pockets but will likely jut out the top of women’s such is its size (174.6 x 85.4 x 8.2mm). It’s heavy at 232g and we sometimes found it a tad top heavy and tipping forward while typing if we didn’t cradle it with both hands. A one handed phone this is not.

The build quality is Apple-esque in its finish and is representative of Huawei’s immense design leap forward in the past year. Our purple review unit (there’s also a blue model) has a metal rim with glass back despite not having wireless charging. That back is laser etched all over with a crosshatch pattern that hides fingerprints, improves grip and frankly just looks great.

A squircle camera module holds the same triple camera set up as the Mate 20 Pro, sitting above a circular fingerprint sensor on which you can swipe down to bring down the notification shade, handy on a phone this large.

Around the front is a flat display with rounded corners and a small dew-drop notch that houses the front facing camera. The earpiece above it acts as one of the stereo speakers with the other on the bottom edge next to the USB-C port.

Buttons are clicky and sturdy (the red accent on the power button is a nice touch) and it’s rounded off with a headphone jack and lesser-spotted IR blaster on the top edge. Aside from the lack of wireless charging and only having IP53 water resistance, the Mate 20 X is an incredibly feature-rich phone.

The monolithic form factor isn’t just for show – the Mate 20 X really flexes when it comes to performance, with practically identical specs to the Mate 20 Pro. It has the Kirin 980 processor and 6GB RAM with 128GB expandable storage, though it’s for Huawei’s proprietary nano SIM sized memory card rather than standard SD. If you don’t need the expansion then it acts as a dual SIM tray.

The phone is compatible with the optional Mate 20 X specific M-Pen stylus akin to the (included) S-Pen of the Galaxy Note phones. We weren’t supplied one for review but as an optional accessory it was not missed. If you buy one then you can use it to navigate the UI or take handwritten notes in the Memo app.

Huawei’s insistence that the Mate 20 X is a gaming phone does it a disservice. On the one hand, yes, it can run every top tier mobile game from Fortnite to PUBG to Asphalt 9 very well but it’s not designed specifically with gamers in mind like the Asus ROG Phone or the Razer Phone 2 and is a powerful device for anyone who wants a large display - not just gamers.

That said, the Mate 20 X is one of only three phones to be certified to run Fortnite at 60fps alongside the Honor View 20 and the US variant of the Samsung Galaxy Note 9.

You’ll love the Mate 20 X's large display just as much for multi-tasking, a genuinely enjoyable split-screen app experience and an episode or two on Netflix without straining your eyes. After laughing at the phone’s size for a good few days we eventually loved the extra screen it gives, even if we had to indulge some hand acrobatics to avoid dropping the thing.

With these Mate 20 X benchmark results you can compare raw processing speeds (Geekbench), graphical frame rates on various tests (GFXBench) and browser speed (Jetstream) against phones of comparable price and specs. Higher scores are better, but we stress that all these phones have impeccable performance.

The Mate 20 X has the exact same triple camera set up as the Mate 20 Pro. This is a very good thing as it’s one of the best camera arrays to date on a smartphone (gallery further down).

You don’t get the monochrome sensor we saw on the P20 Pro (which is a bit of a shame), instead there’s a 20Mp f/2.2 ultra-wide angle paired with the 40Mp f/1.8 main sensor and an 8Mp f/2.4 telephoto. The latter can achieve 3x optical zoom and 5.x digital zoom.

All photos you’ll get from the Mate 20 X have a degree of over-saturation and sharpening that may not be to all tastes – the iPhone XS and Google Pixel 3 often produce more natural colours. But there’s no doubt that the Mate 20 X is a stunning pocket (depending on the size of your pocket) camera device that truly excels.

The versatility afforded by wide angle and true optical zoom is very freeing if you get into it while the camera app is much improved from older versions, with the accessibility to act as a point and shoot, or to rummage around in the extensive pro modes to tweak your output.

Only the telephoto lens has optical image stabilisation but we didn’t find results suffered from the other two lenses as a result. Optional ‘AI’ prompts select the best mode for you to shoot in and they work really well.

As with the P20 Pro, night mode on the Mate 20 X is pretty magical in how it brings light and detail into low light shots. We prefer it to the Pixel 3’s Night Sight as Huawei’s processing is more natural. Google’s is great, but it brings in so much light that the scene doesn’t actually look natural.

Conversely an ongoing software annoyance is Huawei’s Chinese-minded beauty modes, but once you’ve found and turned them all off then you’re good to go (unless you want them, of course, but in our book face slimming and skin smoothing is odd).

Video capture at 1080p can go up to 60fps but it is also capable of 4K UHD capture and Huawei has applied its AI stabilisation (AIS) at all levels. The clever ol’ Kirin 980 processor deals with all the wobble and shake to give great results, particularly where judder normally ruins 4K video. Well done Huawei. 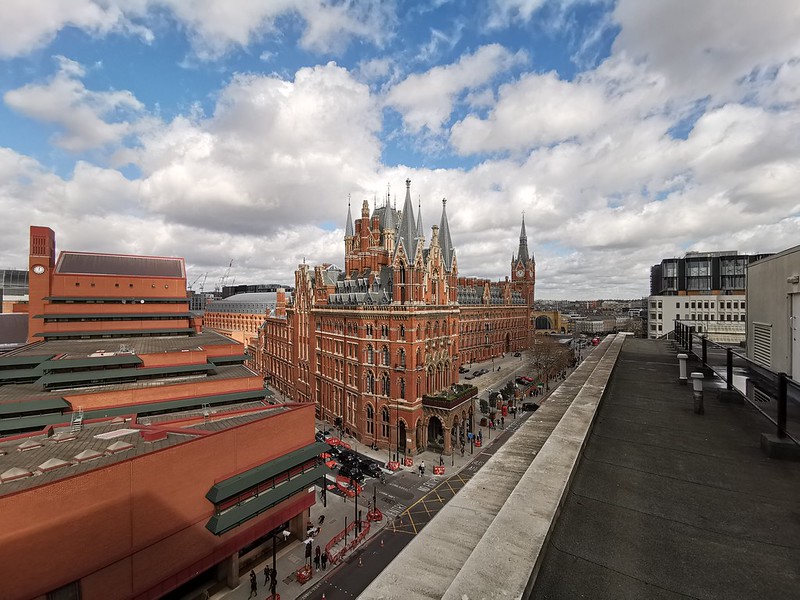 Another fine reason to go for the Mate 20 X is its astonishing battery life. Granted, this isn’t as clever as refining software or excellent power management. This is simply a huge 5000mAh battery with a screen capped at 1080p. It lasted for 10 hours and 48 minutes ages in our battery test (the fourth best time ever at the time of writing in March 2019) and in day to day use we rarely got to bedtime without at least 40% left in the tank.

The supplied 22W fast charger is not as fast as the Mate 20 Pro’s 40W but still tops up at a very quick rate. We didn’t get caught short with the amazing battery life here, and neither will you.

Huawei’s EMUI has always toyed with spoiling our enjoyment of its phones but it’s got to a stage now with Android 9 Pie where it is better than it has ever been. It still apes iOS a bit too much, and the notification overlays are heavy and occasionally clunky but overall our time with the Mate 20 X was enjoyable.

You can add an app drawer and a dark mode and we also made the font smaller. Be aware that with EMUI 9 Huawei has blocked the use of third-party launchers, so you will be stuck with what you get here unlike on other Android phones.

As well as the traditional three button navigation Huawei has added the option for its gesture system of swipes from the bottom of the screen. It frees up some space (not that you need it with this phone) but the decision to activate Google Assistant with a swipe up from both bottom corners is perplexing as we kept activating it accidentally – that swipe should be back, which is instead a swipe from the left edge. We stuck with the three buttons.

If you want a premium flagship smartphone with the largest screen possible then this is it. With practically the same specs as the Mate 20 Pro including the same excellent cameras, the Mate 20 X is a curious smartphone that we enjoyed using far more than we expected given the size.

Performance is flawless in 2019 and the winning combination of large battery and 1080p display is attractive. If you want a smaller phone then you have many other options but the Mate 20 X is flying the flag for screen real estate with build quality that is right out the top drawer.

It doesn’t have full waterproofing or wireless charging but with a proper fingerprint sensor and a headphone jack, we are sold.