The Honor 30 Pro+ offers phenomenal hardware at a very competitive price, most of all the camera – right up there with the best around. As ever, the big caveat is simply software, as like all modern Huawei phones this doesn't support Google Mobile Services.

The Honor 30 Pro+ is the biggest and best Honor phone to date, at least on paper, sitting at the top of the three-phone Honor 30 range.

It’s not officially available in the UK, where the company is mostly focussing on budget phones and those few devices it can sell that still have Google support baked in. But if you don’t mind importing the handset – not to mention a life without the Big G – then there’s a lot to like here, especially in the powerful camera setup.

Honor has – mostly – avoided anything outlandish with the design of the Honor 30 Pro+, which fits comfortably into the lineup of 2020 premium flagship phones.

Let’s clear that ‘mostly’ up. The 30 Pro+ comes in three finishes. I’ve reviewed the Midnight Black model, with pairs a glossy, reflective black finish with gold detailing around the camera. If you’d rather something flashier, there’s an Emerald Green model, but the real eye-catcher is the Titanium Silver model. Not because of the colour, but because this version says ‘HONOR’ right down the back of the phone in giant letters. I...am not a fan.

Beyond that questionable aesthetic choice (mercifully absent on the black and green models) the 30 Pro+ is exactly the sort of premium glass-and-metal slab you’d expect. The 6.57in is generously curved at the edges, with fairly slim bezels and a double selfie-camera cutout.

Glass coats the back of the phone too, where you’ll also find the rear quad-camera array in a now-familiar domino cutout in the top-left corner. It’s far from flush with the body, but doesn’t jut out as far as on some rival devices (*cough cough* Samsung).

At 190g and 8.4mm thin the 30 Pro+ is comfortable, but still has enough heft to feel reassuringly premium, and I’ve been impressed by the build quality. I wish the edges were slightly more rounded, but beyond that there’s really little to complain about.

You get IP54 water-resistance, and otherwise there’s a USB-C port, an IR blaster, and stereo speakers – but no headphone jack.

Unless you opt for the HONOR-brandished Silver option, the 30 Pro+ won’t stand out too much on the basis of looks alone, but it’s a slick, polished device that can hold its own in this year’s crop of flagships.

At just under 6.6in the display on the 30 Pro+ is almost petite by 2020 standards, but that says more about other phones than it does about this one.

You get a 90Hz refresh rate, which is likely higher than your current device, but not up there with the 120Hz and 144Hz panels at the top of the game right now. Still for most 90Hz is still more than enough of a jump from standard 60Hz displays, offering smooth scrolling and faster flowing animations that simply make the phone feel more responsive and downright pleasant to use.

The panel curves at the edges, though not to the extreme extent seen in the ‘waterfall’ panels that parent company Huawei has started including in its own flagships. As far as I’m concerned that’s a blessing though – this strikes the right balance between form and function, avoiding the impracticalities that come with more aggressive curvature.

Here’s one area where there are really no compromises in the Honor 30 Pro+. It’s powered by the Kirin 990 5G, which at the time of writing is the most powerful chipset from Huawei thus far.

In my CPU benchmarking it lagged a little behind the Snapdragon 865 found in many Android rivals, but not by much, and in graphics tests it delivered similar performance to equivalent Snapdragon phones, though lagged badly behind in a couple of specific tests.

It comes paired with 8GB of RAM and 256GB of storage by standard – there are 12GB RAM models kicking about, but I can’t find any for sale right now.

Photography has long been one of Huawei and Honor’s strong suits, and the same is broadly true here.

The main lens, the same one found on the Huawei P40 Pro and P40 Pro+, is obviously what you’ll use most, and it delivers the goods. Photos are crisp, vivid, and detailed; with vibrant, accurate colours; and good results even in diverse and challenging lighting conditions. 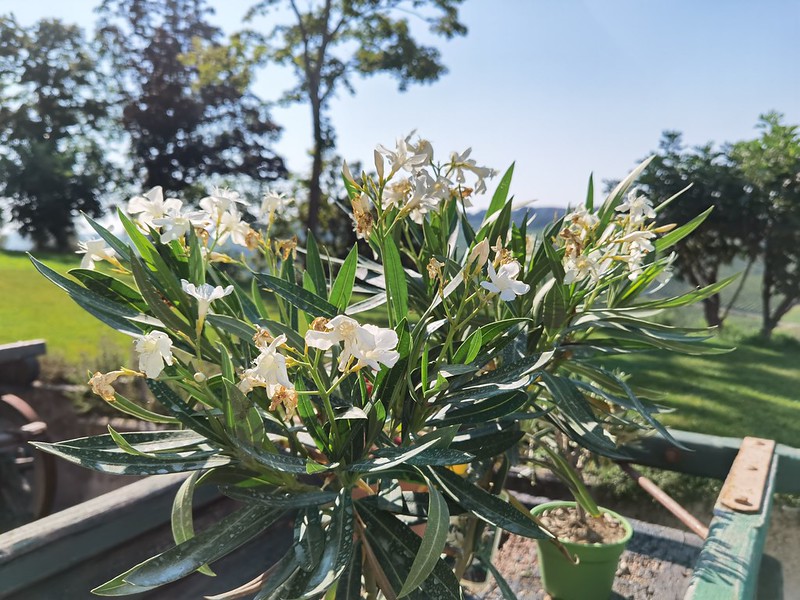 The camera app’s AI Photography mode will do its best to tune the colour settings to the scene and current lighting, but it’s worth playing around – I tend to prefer the shots I get with the AI mode disabled, as it often over-saturates colour, and you may too. Either way shots skew towards social media rather than reality, with have a punchy finish that’s ready to throw straight onto Instagram with minimal edits – though if you prefer the under-stated effect then this may not be the shooter for you.

The phone’s night mode is decent, but actually left me a little underwhelmed. It suffers from a similar problem to other phones chasing night mode gains: it pulls out a laudable amount of detail from inky black scenes, but at the cost of colour accuracy, with the sky in particular often turning an unnatural shade of blue or green as the phone tries to make sense of the darkness.

The 2Mp depth sensor kicks in to help with a much stronger portrait mode however, with a realistic looking bokeh and some of the best edge detection I’ve seen yet, successfully capturing even individual hairs in my test shots.

The wide-angle understandably loses some detail, and colours tend to be a little more muted – which, again, you might actually prefer.

As for the telephoto, it goes up to 50x zoom, but you'll get the best results up to 10x. At these settings, it really is impressive, with fantastic detail capture – though you will begin to really notice the colours pull apart from the main camera, with images looking much less vivid straight out of the camera app. I still don’t think that these huge zoom lenses matter to most people, but if you know you want one then this does the job well.

Flip to the front, and you find a bit of a novelty: a pair of selfie cameras. The main one offers a high-res 32Mp lens, but there’s also an 8Mp ultrawide if you want to pack in a wider scene or a few friends.

As with the rear cameras, colour tuning varies slightly between the lenses, but the primary difference is the obvious one: you’ll get crisper, more detailed shots from the main lens, especially in terms of finer facial detail. Personally I’d rather ditch the wide-angle and reclaim the screen space from the cutout, but I’m sure plenty will appreciate the option of selfies with a wider field-of-view.

I wouldn’t exactly call battery life the 30 Pro+’s biggest strength, but it’s not quite a weak spot either. It’s just...fine.

The 4,000mAh cell is at the lower end of average, and that bears out in our battery benchmarks, where a 10-hour PCMark results puts the 30 Pro+ right in the middle of the pack.

Charging is strong though, with 40W wired charging topping the battery up by a chunky 70% in just half an hour. 27W wireless charging will be almost as fast if you can get your hands on a compatible charger, but it will also charge off the slower Qi standard. 5W reverse wireless charging is included too, if you want to charge headphones from the phone.

In day-to-day usage I found the phone comfortably lasted a day, which is what really matters, but that comes with one big caveat: I always carried a second phone around with me, easing the strain on the Honor’s battery.

Why? Because the Honor 30 Pro+ simply cannot run every app I want – or need – my phone to.

Software is always the elephant in the room with a modern Huawei or Honor phone. Ever since the company was added to the US entity list it’s been banned from trading with most US companies, which means phones like this cannot use Google Mobile Services.

The 30 Pro+ still runs Android – with Android 10 and Honor’s Magic UI 3 included out of the box – but you can’t access the Google Play Store. That means no Google apps, but also blocks you from accessing many third-party apps you may rely on.

Huawei is doing its best to combat this. It’s aggressively courting developers to get apps converted to the Huawei App Gallery, and tools like Phone Clone and Petal Search each do their best to help you install apps from other sources so that you can access the same software you’re used to.

This works to a point, but has its limits. I managed to get WhatsApp, Instagram, Twitter, and more working on the phone, but couldn’t get Uber or Duolingo to install. Other apps – like Todoist – would install but simply wouldn’t run, as they rely too heavily on Google’s systems to operate.

You will probably be able to get most of the apps you use every day to run on this phone. But I can almost guarantee that there will be a few you can’t, and that’s a risk you have to be willing to take going into this.

As I mentioned before, the Honor 30 Pro+ hasn’t had a UK or European release, and at this point is unlikely too.

That means your best bet is to import the phone. You can get a Chinese version from Geekbuying for around £620/$800 at the time of writing, but there’s a better option: the phone did get a Russian release, so you can import it from Honor’s official Russian store for 54,990₽ - around £570/$730.

Right now Honor will also throw on a discount and include a freebie (headphones, wireless charger, or a fitness tracker), and you’ll be getting global software rather than the more restrictive Chinese version.

If you’d like to save a little you can drop down to the Honor 30 Pro, but you’ll lose the 90Hz refresh rate and wireless charging, and will have to drop down to a ‘mere’ 40Mp main camera lens.

Still, it’s worth remembering that for a similar price you could get the OnePlus 8, a Samsung Galaxy S20, or even iPhone 11 – all of which will deliver a smoother software experience and comparable camera chops. Check out the rest of our best phone guide for more options, or our best Honor phone ranking to see what else the company has to offer.

The Honor 30 Pro+ offers phenomenal hardware at a very competitive price. That’s most of all driven by the camera – right up there with the best around – but it will also deliver fantastic gaming performance on a big, beautiful display – as long as you can look past the double hole-punch.

As ever, the big caveat is simply software, where Huawei is still battling up against limits that are beyond its control. The situation is continuing to improve, but you still can’t get the full Android experience here no matter how hard you try.

Throw in the fact that you’ll likely have to import the tech to get your hands on it, and it’s hard to whole-heartedly recommend the 30 Pro+, leaving it languishing as one of the best phones you probably shouldn’t buy.