Should I buy the Google Pixel 3a?

The Pixel 3a is a great mid-range option for those who want a Pixel but can't afford the real deal. There might be more powerful and flashy phones at this price but Google offers something different.

Google's own-brand Android range is now more affordable thanks to the addition of the Pixel 3a and 3a XL.

Google announced the Pixel 3a – along with the 3a XL and Google Nest Hub Max – at its I/O event in California. It's primarily a developer conference but it's sometimes used to introduce new hardware too.

One of the main reasons for the new Pixel 3a phones is to offer consumers with tighter budgets a Google smartphone that's affordable. The Nexus range used to be extremely good value for money but the Pixel devices have become pretty expensive so its good to see Google getting back to its roots.

To that end, the Pixel 3a is a very modest £399 or $399 and is available now from the Google Store and retailers like Carphone Warehouse, EE, Argos, Mobile Phones Direct.

This makes it around half the price of the Pixel 3 which is £739/$799, and puts it in competition with some excellent mid-range phones from the likes of Motorola, Honor and Xiaomi.

The 3a has officially been discontinued by Google in the US ahead of the launch of the Pixel 4a, but don't worry - it's still available from the Google Store in the UK, and from carriers and other stores on both sides of the Pond.

A mid-range device, especially a version of a flagship phone, can often be a much poorer construct due to the price different.

However, Google has kept things very similar indeed for the 3a and even side-by-side you'd struggle to tell it apart from the regular Pixel 3. The design is kept the same with all the little details found on the flagship devices.

That includes a two-tone finish on the back with a shiny glass section around the camera. The main different is that the 3a is a little bit more chunky, but not by much. There are also slightly thicker bezels either side of the screen. The main thing here is the big chin below the display.

Google offers the phone in Clearly White, Just Black and a new colour called Purple-ish. This is a dusty pastel looking colour which is very subtle and has a lime green power button.

The pressure sensors in the side of the phone remain so Active Edge allows you to squeeze the phone to do things like summon the Google Assistant. It can be customised to do other things, though.

There are two big things to note about the 3a design when comparing to the regular 3. The first is that you get a headphone jack, thanks partly to the slightly bigger frame. However, you don't get any waterproofing as Google has to keep the costs down somehow.

See our round up of the best Pixel 3a and 3a XL cases here.

Although the design of the Pixel 3a is very much like its flagship big brother, there are a number of spec changes to be aware of. Just dropping waterproofing was never going to the make the phone half the price, after all.

One of the key changes is that you get a lower tier processor. So there's a Qualcomm Snapdragon 670 instead of an 845.

In general use, the phone doesn't really feel any different to the Pixel 3 with a small difference when opening apps in a side-by-side text. Without that context, though, the phone feels perfectly smooth in day-to-day use.

However, it does take longer when demanding tasks arise such as taking a Night Sight photo with the camera. It's a small sacrifice for a phone this affordable.

As you can see in our benchmark results below, the 3a performs fairly well. It might get outdone by the likes of the Honor and Xiaomi but we don't think that's what you're likely to be buying the Pixel for. It's strengths come elsewhere such as getting pure Android.

There's still 4GB of RAM but just a 64GB option when it comes to storage. Google, like Apple, doesn't offer expansion with a microSD card slot but you can make use of unlimited cloud storage for photos and videos at High Qualilty. That means full resolution photos as the cap is 16Mp but videos will be 1080p.

Often what you're paying for when buying a flagship phone is the significantly better camera.

You might be shocked to learn that the camera experience is exactly the same on the Pixel 3a with the 12.2Mp sensor from the regular 3 and all the clever software features including Night Sight.

Having just one camera in a world of phones with three, four or even five might seem odd but Google has some of the best software which proves that it's not just about how many lenses you have.

As mentioned earlier, the thing to bear in mind is that the lower powered Snapdragon will just take a bit longer to process the workload of these camera modes.

As well as Night Sight you get other things like Photobooth (complete with new triggers such as pouting) and a new Timelapse feature which will automatically choose the right framerate between 6fps and one frame every 4 seconds depending on what's being filmed. Google Lens can now identify objects you point the camera at and show you similar ones.

There is a small difference when it comes to the front camera because the Pixel 3a does not feature the Group Selfie Cam as there is just one front facing sensor.

As you can see below, the results from the Pixel 3a are impressive. It's not too surprising since this is the flagship camera and no software features are disabled. You don't necessarily need multiple lenses to have a good portrait mode, although it doesn't always get it right - but nor do other phones with dual lenses.

There might be more flashy cameras available in the mid-range but the Pixel 3a quietly does a great job at giving consumers the kind of results and features they want. Our Night Sight shot in the gallery below might not look amazing, but it was shot in almost complete darkness with only a small amount of moon light. 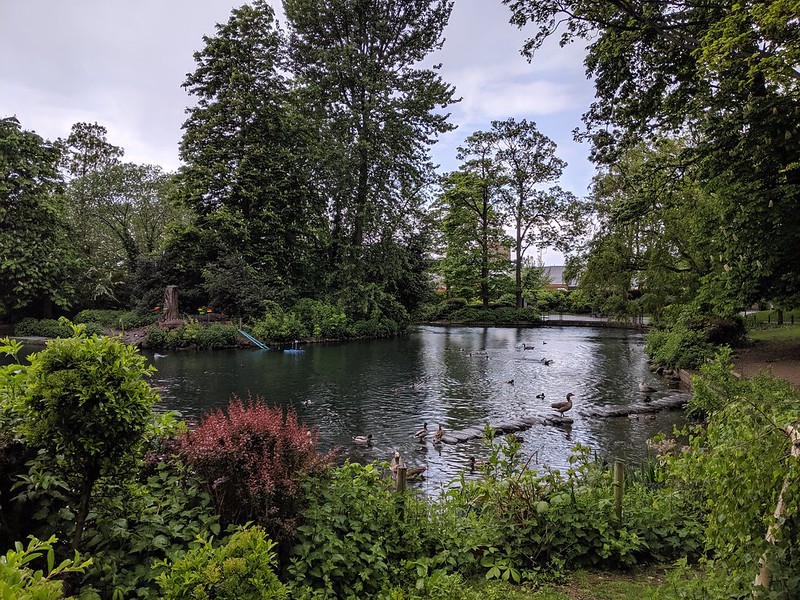 You'll be able to see all of this clearly on the Pixel 3a's 5.6in display – making it marginally bigger than the Pixel 3. It's still OLED despite this lower price point and has a Full HD+ resolution.

It's still a great panel, especially for the price but as you might expect, doesn't quite have the same level of quality compare to the 3. The whites are a bit on the yellow side and moving off the main viewing angle quickly turns things a tad blue. On the plus side, it's very bright at maximum with around 500cd/m2 which is above average.

If you want something bigger, you can opt for the Pixel 3a XL which has a 6in screen.

We mentioned earlier that there's a headphone jack which is an advantage over the Pixel 3 and there's also stereo speakers (although the lower one is down firing) and a USB-C port which support fast charging. What you don't get here is wireless charging.

A marathon, not a sprint

In terms of battery life, Google claims you'll get 30 hours from a single charge so it is designed to last longer than a day. Something called Adaptive Battery will limit power to lesser used apps to make your phone last as long as possible.

The 3000mAh has lasted us well during our testing time and only uses about half the juice in a typical day. This phone comfortably lasts a couple of days unless you're going to hammer it with tasks.

There might not be wireless charging at this price but the 18W fast charging tops the phone up quickly, a decent 47 percent in 30 minutes if the phone is dead.

There's little to say about the software here because Google doesn't hold stuff back for the more expensive devices. You get the pure Android experience you'd expect and the firm promises three years of OS and security updates so you will definitely get Android Q when it arrives and future versions as well.

A new feature (in preview form) that uses the camera is part of Google Maps. It's called AR navigation and gives you handy directions for when you're walking. Hold the phone up and you'll see huge arrows and other useful bits of information to make sure you're going the right way overlaid on the real world.

You need to be careful when using it, but it's really cool and means you don't have to head off in one direction only to find you've gone the wrong way.

The AR (augmented reality) means you can see what's in front of you via the camera, so you can avoid bumping into people and objects. Move the phone down and Maps will automatically revert to normal. Note that Google Maps AR is designed to work in urban areas.

We're pleased that Google decided to launch the Pixel 3a to offer what we believe many consumers want and have been missing out on for a long time now.

This is Google somewhat going back to the philosophy of the Nexus devices which were such good value for money so it's great to see an affordable Pixel phone.

Although the phone might get outpaced by some rivals in some areas like performance, we don't believe that stops the Pixel 3a being a great mid-range choice. You'll be very satisfied if you want Google's simple yet feature-rich design and software - not to mention future updates.