Should I buy the Google Pixel 3 XL?

The Pixel 3 XL is still a decent Android phone despite the introduction of the Pixel 4 range. The display is outstanding, the design is finally premium and the camera is one of the best ever seen on a smartphone.

A fairly high price tag is no longer an issue thanks to a significant drop, so the 3 XL is a value choice if you don't need something brand new.

Despite being the worst kept secret thanks to numerous leaks, we are still mighty excited and impressed by the Google Pixel 3 XL.

The larger of two Pixel 3 phones has a remarkably large notch at the top of its tall 6.3in display – odd at first given that the smaller Pixel 3 has no notch and the same dual cameras as the XL.

It’s a little unremarkable to look at in pictures, but once you start to use it, it’s all about the software and what it can do wrapped up in surprisingly premium hardware.

And oh, that camera. It’s the best yet on a smartphone and is a bug enough reason to buy this phone over any other. Google’s vision of the perfect phone seems to be going to plan.

How to buy the Pixel 3 XL

You can buy the 3 XL for £579 from Amazon at the time of writing and in the US, it's on the official store for $599. Those are pretty good prices for a phone that's only a year old and the Pixel 4 doesn't bring a crazy amount of upgrades and costs £829/$899.

Notch ado about nothing

Whether a notch irks you is personal but it’s not a big deal to us. It’s there to house the earpiece and dual cameras while keeping the phone as small as possible, that’s what notches are for (though for what it's worth you can hide it).

The 3 XL is virtually the same overall size as the 2 XL but manages a larger display and an extra camera. On paper, this is not a regression.

The rear of the phone is similar to previous generations yet for the first time supports wireless charging despite being matte – it’s all glass though. The etching Google has applied to the glass is very clever and keeps the contrast of the previous two generations’ designs in the classiest way possible.

It still feels hefty and premium and the finish is awesome. Fewer fingerprints, but it’s glass so it’s still at the peril of the ground.

The top section is smooth glass and houses a single rear camera and flash. The phone comes in three colours, Just Black, Clearly White and Not Pink – there is no contrast ‘panda’ edition like we got last year.

That notch also allows the phone to retain dual front facing speakers like the last generation Pixel, with a wider speaker at the bottom of the phone. Google said they are 40% louder and richer than on Pixel 2. We’re not sure about that measure, but they do sound better.

There’s also a G logo and fingerprint sensor, but no headphone jack. There’s a dongle in the box though along with USB-C headphones that look and fit like the wireless Pixel Buds.

Just like those headphones, we find them very uncomfortable after just an hour’s use. Your mileage may vary, but we only used them once because of this. It’s a shame because they have an inline remote and offer real-time translation just like the expensive Buds.

There’s also IP68 waterproofing and massively improved haptics. Where the Pixel 2 (and other phones with less good vibration motors) shook the whole phone when you tapped buttons, the 3 XL’s sharp, precise haptics are a pleasure to use and as good as those on the iPhone XS and LG G7.

This is quite a playful feeling phone, and that is a lot to do with how good the screen is and how it looks in contrast to the all-glass design.

Google is continuing its design language in a light way, melding the hardware it sees fit to complement the Material Design concept  its software is modelled around. The block colours of the phones are a world away from the austere designs pushed out by Apple, Huawei and even OnePlus.

After the problems the Pixel 2 XL had with its display (or at least how it was calibrated for colour hungry eyes) the 3 XL’s display hits the ground running. The 6.3in 2960x1440p P-OLED looks brilliant, with good colour calibration and viewing angles.

The Pixel 3 XL (left) next to the smaller Pixel 3

There’s a new adaptive colour profile loaded on to ensure this. It considers current lighting settings to change the calibration of tone, and works quickly and quietly. It’s great.

Google had to make sure the screen was better than the disaster of having to severely recalibrate the 2 XL’s in a software patch. We’re happy to report this is a huge improvement.

Power to the Pixel

It’s all in a phone that is run by the Qualcomm Snapdragon 845 chip, the same one found in the OnePlus 6 and Samsung Galaxy S9. Google’s stuck to 4GB RAM where others push 6 or 8, but in our testing the 3 XL ran completely smoothly with no hiccups.

This is to be expected as Google is in complete control of the hardware and software of the phone. It’s the iPhone of the Android world in this way, and is all the better for it.

The below benchmarks pitch the phone against the smaller Pixel 3, the Pixel 2 and other devices with similar specs.

What the results show is that in synthetic benchmarking, they are all very good. But we think that using the Pixel 3 XL is the most fluid, satisfying way to experience Android thanks to the optimisation of hardware and software.

The battery size is the only thing that changes, aside from the display size, buy opting for the 3 XL over the 3. It’s 3430mAh as opposed to 2915mAh, so this is the one to get if you want to eke the most out of a day.

A day is about the most you’ll get if you’re a heavy user. We got about four to four and a half hours screen-on time with the 3 XL. That’s pretty good, but not as much as you’ll get with the Galaxy Note 9 which sometimes gets nearly six.

The Pixel 2 phones were widely regarded to have the best rear facing cameras of any smartphone despite only having one lens. The Pixel 3 XL is even better. Seriously.

It’s incredible what Google is achieving with post-processing software.

While two or three lens phones try to capture more detail during shooting, the Pixel 3 XL elects to capture several layers of image information with one lens and then uses software to process the best possible image after the fact. And it works stupendously well.

A new feature called Top Shot automatically helps you select the best photo from a burst of photos so you don’t get a photo where people have their eyes closed and are smiling properly (or goofing off, but it works well!).

Along with this is Super Res Zoom where the phone can detect your hand shaking while using digital zoom and corrects the photo accordingly, mimicking what you’d achieve with a second telephoto lens. It works, but it's not as good as actually having a second lens.

Whether or not these sorts of features are gimmicky depends on how long you end up using them, but just like with the previous two Pixel generations, using the Pixel 3 XL simply made us take more photos with our phone.

It’s noticeably better than the iPhone X and depending on your tastes, the newer XS. The Huawei P20 Pro might just edge night-time photography still, but Google is promising its own mode Night Sight in a software update soon that could change that,

The 3 XL continuously chooses the right balance of colour and contrast and can handle light amazingly. You won’t be disappointed, and you get unlimited Google Photo storage.

The dual front facing cameras are an interesting choice, allowing for wide angle selfies and multi-face detection to keep everyone in focus. Aside from this there is no immediate advantage to having two lenses – and you get them both on the regular Pixel 3 without the notch, if the notch bothers you.

You may need to click through to view the below gallery: 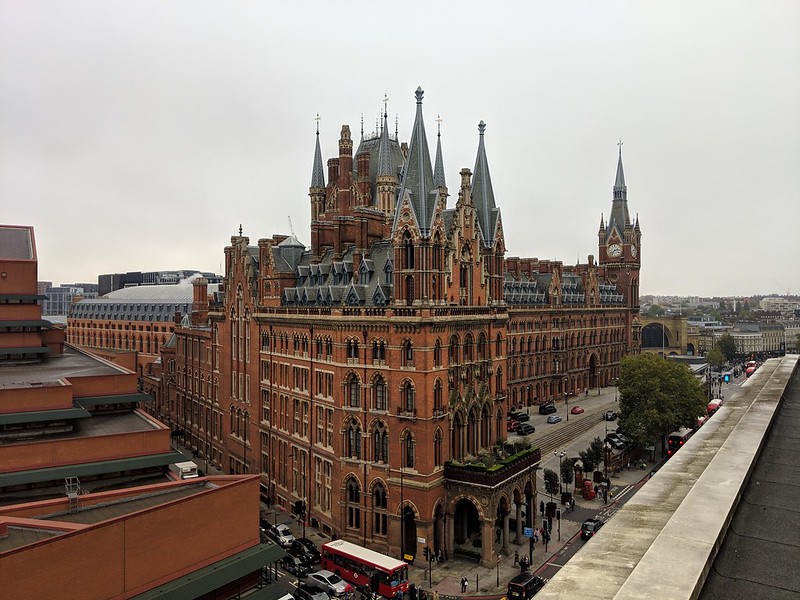 Another slice of Pie

Older Pixels and the Sony Xperia XZ3 already have Android 9 Pie but of course the Pixel 3 XL ships with it installed. Google makes you use the new gesture-based navigation system as default and it does take a bit of getting used to after years with Android’s three navigation buttons.

You can’t revert back to the familiar three navigation buttons, so Google is all in on this new system. But it’s easy enough to get used, if not as beautifully intuitive as Apple’s gestures on the iPhone X series.

A feature that is built-in that until now has only been available as beta versions on older Pixels is Digital Wellbeing. This is the ability to set app limits to help you use certain services less, and to actually spend time away from your phone rather than use it more.

You can set app timers so you’re only on Instagram, say, for 15 minutes a day. It makes you more aware of how much time you waste on your phone but it’s pretty easy to override and keep scrolling.

Google made a big deal at launch about how the software ecosystem continues to improve over time. This is in the cloud-based services such as Google Translate but of course other phones can run Google apps and services. It’s true that on the 3 XL though, it’s most closely intertwined in the OS given it’s a Google phone.

This is evident with the excellent Pixel Stand, a £69/$79 accessory that pairs exclusively with your Pixel to become a mini smart display. It wirelessly charges the phone and can act as a digital photo stand but it’s most useful as a Google Home Mini style device. It’s a worthwhile purchase on top of the phone.

Google also said that Pixels would be the first to get the Duplex feature it teased earlier in the year that can call businesses for you to book restaurants and the like.

A clever call screening feature is currently US-only and even then, initially only in six cities. But it’s a great way to ward off cold callers and unwanted calls as Google speaks to the caller and their reply appears live as text on your screen. It’ll put them off calling again and means you don’t have to deal with it.

We weren’t able to test this in the UK, though.

The third Pixel generation is the best yet and if you don’t mind spending more and getting a notch then the Pixel 3 XL has a bigger screen and bigger battery than the regular version.

You’ll get Google’s best, most premium and refined phone to date. The camera is utterly astonishing and the best on a smartphone – though not as good as an actual DSLR.

The software is excellently optimised for the hardware and works seamlessly, which we can’t say for non-Google Android phones. The etched glass back is lovely and it’s simply a piece of hardware that’s a pleasure to use.

The Pixel 4 XL might be tempting as the newer model but with a price cut and not a huge difference in specs and features, the 3 XL is still an enticing handset.