Should I buy the DJI MIni 3 Pro?

It'll hit your wallet fairly hard, but the Mini 3 Pro is the most capable sub-250g drone we've ever reviewed. But the price and Pro suffix are largely justified by the features and image quality on offer.

DJI’s Mini series of drones has always been about one thing: keeping the weight under 250g. The reason for that is simply to make it possible to fly them in many countries without registration or training. You can get them out of the box and fly them legally with no paperwork or extra costs, and that’s what consumers want.

Until now, if you bought a Mini you had to compromise on features and – to some extent – quality. That’s because, until the Mini 3 Pro, there was no obstacle avoidance and no ability to automatically track a subject: standard features on other DJI drones.

But now, you’re getting effectively the features from the Mavic Air 2 (with a few improvements to boot) that you can fly in many more places.

The Mini 3 Pro, then, represents a major upgrade, but can it justify its ‘Pro’ suffix and is it worth the significantly higher price? Let’s find out.

Previously, the Mini 2’s  video topped out at 4K30 which was good, but didn’t match heavier, more expensive models such as the Mavic Air 2.

Now, the Mini 3 Pro shoots at up to 4K60, allowing you to slow down the footage for an even smoother, more cinematic look. It can also shoot in HDR so long as you’ve selected 24, 25 or 30fps in any resolution.

Another new feature is that the gimbal can rotate the camera to portrait, which is better for taking portait photos and of course, videos for sharing on social media as it means you’re not cropping a landscape image and throwing away so many pixels.

The other two highlights are the forward, backward and downward obstacle sensors, plus support for ActiveTrack 4.0.

A big complaint of previous DJI Mini drones has been the lack of sensors which can help prevent them crashing into trees and other objects while you concentrate on shooting. Though there are no side-facing sensors, the six present cover a good area around the drone and enable the Mini 3 Pro to fly automatically, track a subject and avoid obstacles at the same time.

It also has the full complement of QuickShot modes: Dronie, Helix, Rocket, Circle, Boomerang and Asteroid.

The Mini 2 didn’t have the latter, which produces a fun video that starts as a sphere panorama high up in the air and flies down to end centred on your subject.

There’s also MasterShots, which performs a series of maneuvers while keeping your subject in the centre of the frame. It’s an easy way to capture a cinematic-looking sequence without first having to master the flying skills to do so.

One of the biggest gripes from Mini owners was the inability of their drone to track a subject, especially considering the older DJI Spark could do this. DJI has never officially explained the reason behind this, but the good news is that  the Mini 3 Pro has ActiveTrack 4.0.

ActiveTrack is part of FocusTrack which also includes Spotlight 2.0, which keeps your subject in the frame while you control the drone manually, and Point of Interest 3.0 which flies automatically in a circle around a subject.

In terms of design, the Mini 3 Pro is completely different to its predecessors. Its front arms rotate 180°, and the rear arms flip out horizontally. The battery slots directly into the rear with no cover to open and close and the gimbal sticks out in front of the drone and can be angled upwards by 60° (not quite the 90° possible with the Parrot Anafi), which could be useful for certain shots when flying lower than your subject. It’s more useful when taking spherical panorama photos as there’s much less of a blind spot at the top of the image compared to other DJI drones whose gimbals typically tilt upwards only 30°.

DJI says the arms and propellers are more aerodynamic, and that allows for a slightly longer flight time of 34 minutes from the standard battery. In some countries (but not the EU or UK), you can buy a ‘Plus’ battery that extends flying time up to 47 minutes, but this does increase the weight beyond the 250g threshold.

As before, there’s a microSD slot and USB-C charging / transfer port. And you get around 1.5GB of internal storage so you can still take photos and record a small amount of video if you forget your microSD card.

The other notable change is the introduction of a new remote controller. It’s much like the RC Pro you may have seen available with the Mavic 3 and includes a 5.5in touchscreen so you don’t have to use your phone and the DJI Fly app.

It’s basically a built-in Android phone dedicated to the Fly app, and it’s certainly a lot more convenient to use than connecting a smartphone to the existing RC-N1 controller (the controller included with the Mini 2 and Mavic Air 2S).

You have a choice of both with the Mini 3 Pro as DJI offers bundles which include both. There’s even a third option to buy the Mini 3 Pro with no controller at all and use one you already have, but those are the only compatible models: you cannot use a DJI RC Pro.

With a brightness of 700 nits, the DJI RC’s screen is usable in most conditions, but would benefit from a hood if you’re faced with direct sunlight. No doubt DJI will sell one as an accessory.

There are other (programmable) buttons and two jog wheels for controlling gimbal tilt and camera controls, as well as dedicated shoulder buttons for taking photos or starting and stopping video.

Regardless of which controller you use, the Mini 3 Pro uses the O3 video transmission system which is capable of a 1080p30 preview up to 12km away, though that’s reduced to about 1.5-3km in urban areas where there’s strong interference.

If you do buy the bundle with the DJI RC, then you can use the QuickTransfer feature to download videos and photos to your smartphone (using the DJI Fly app), allowing you to edit and share them without needing a PC.

As well as having a redesigned gimbal and the ability to shoot in portrait, the Mini 3 Pro has a larger sensor. Having the figures in fractions of an inch isn’t too helpful as most people can’t easily understand the differences in size.

A much easier comparison is to put those into the area of each sensor. So, roughly speaking, here’s how they stack up:

The larger the sensor, the more information (the more light) it gets, and this good for a couple of reasons. First, it should lead to better quality when in the early morning and at dusk, or night and it should also mean better dynamic range, for more detail in highlights and shadows.

Assisting with all this is the f/1.7 lens, which has a larger aperture than the Mini 2 and Mavic Air 2’s f/2.8 lenses. Focus isn’t fixed, either, as with the Mini 2, so you can tap on the screen to focus on a particular object, or switch to manual focus.

Getting to the all-important quality itself, the Mini 3 Pro offers great 4K footage with lots of detail and, even if you don’t use the D-Cinelike profile, decent colours.

There’s still the potential for skies and highlights to blow out in high-contrast scenes, so you may want to invest in a set of DJI's ND filters. However, dropping from 4K60 to 4K30 means video can be recorded in HDR and that helps quite a bit.

Quality in low light is very good, and it’s possible to get some great looking photos and video at dusk in particular.

The 120fps slo-mo mode is fun to use if you’re capturing fast-moving subjects, but as it’s only available at 1080p, detail takes a noticeable hit. 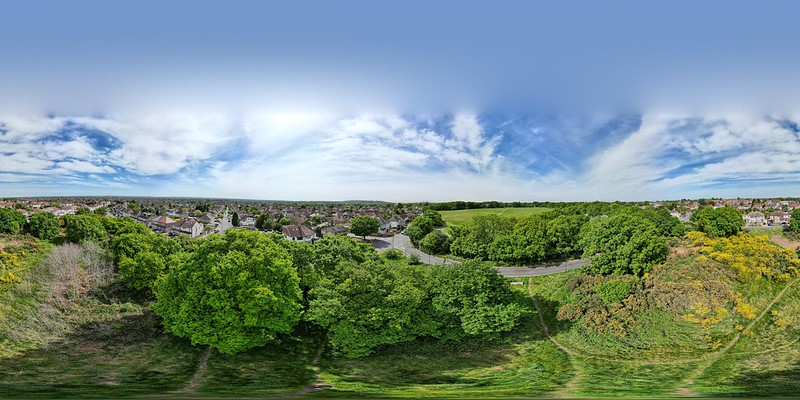 In the normal single-shot photo mode, images are recorded at 12Mp. This is the same pixel-binning technique that many smartphones use, and leads to perfectly usable, detailed photos. You can opt for the 48Mp mode, and you can also choose to shoot in RAW (DNG format) for processing in Photoshop later.

But for higher-resolution images, the Mini 3 Pro can shoot 180° panoramas in horizontal and vertical aspects. In horizontal mode, it takes quite a few photos and (as with all pano modes) stitches them together automatically. It then compresses the image to around 25Mp, not the 100s you might imagine. Pano is a separate mode from photos, and you have to scroll through the list of modes to find it, which can be a bit confusing for those new to DJI Fly.

Flying the Mini 3 Pro is no different to any other DJI drone, which is to say it’s extremely easy. The DJI RC has a mode slider so you can quickly switch between Cinema, Normal and Sport modes. These simply change the responsiveness of the sticks, so in Cinema mode, big movements don’t have much of an effect, and this helps to keep video as jerk-free and cinematic as possible.

ActiveTrack works brilliantly, and the obstacle avoidance enables it to follow you (or your subject) while avoiding tree branches and other things.

As mentioned, there are three options when buying a Mini 3 Pro. Here’s what you get and what they cost:

There’s also a Fly More bundle, but this doesn’t include the drone: it’s just a package of accessories which includes two standard batteries, a three-way charger, shoulder bag and two sets of propellers. This costs £159.

You can buy a Mini 3 Pro from DJI directly, but it’s also available from other retailers including Apple, Best Buy in the US, Argos in the UK and others.

If you’re after a capable drone that has obstacle avoidance, the ability to track subjects and shoot at 4K60 (or in HDR), the Mini 3 Pro is a great choice. The low weight means you can fly it straight out of the box without training courses or the hassles and cost of registration in many countries.

As a bonus it also shoots vertical video, which makes it ideal for TikTok creators, or those using other social media where vertical video is a must.

The high cost means it isn’t the obvious alternative or upgrade from a DJI Mini 2, but if you already own an RC-N1 controller, being able to buy the drone on its own might prove a tempting option.

Most consumers won’t use the Mini 3 Pro’s RAW or D-Cinelike modes, but they’re a welcome sight for real enthusiasts and pros needing to use a lightweight drone.