Should I buy the BlackBerry Key2 LE?

The Key2 LE is, obviously perhaps, not as good as the regular Key2. It’s noticeably slower and feels less premium thanks to the lightweight polycarbonate used.

The loss of the capacitive keyboard is also a big deal. We really like not having to touch the screen on the Key2 and scroll with the keys, and on the Key2 LE you can’t do it.

But then again if you never had it, you might not care. This is the most affordable way to get the BlackBerry Android experience but you’ll lose out on performance and get a smaller keyboard.

BlackBerry has been ‘back’ for a while now. Licensee TCL has released the KeyOne and Key2, harking back to the glory days of the hardware keyboard but modernised with Android.

But the phones have midrange specs and quite high prices and TCL is acknowledging this with the release of the BlackBerry Key2 LE – light edition.

Coming in at quite a lot less than the flagship Key2, the LE looks quite similar but has a fair few differences. We went hands-on with the new phone at IFA 2018, and these are our first impressions.

Where to buy the BlackBerry Key2 LE

The keys to success

The design is incredibly similar to the regular Key2, but there are some differences when you look closely. Where the Key2 used harsh lines and metal on the sides, the Key2 LE is a polycarbonate with a smoother feel. It makes for a lighter phone with more rounded edges.

The back of the phone is textured like the regular Key2 but has a different softer dotted pattern. The Key2 LE is a lighter weight, altogether friendlier version of the phone, which is also reflected in the colours it’s available in – slate, champagne, and a red that TCL is calling atomic.

It doesn’t make the phone feel cheap per se, just more accessible to an audience that may be put off by the quite masculine design of the Key2, or who isn’t quite sure they want to spend tons on a phone with a physical keyboard. Although its only 13g lighter than the regular Key2 at 156g, the LE is definitely less noticeable in your pocket.

The display is the same size as on the Key2 but the top bezel is slightly thicker. This is because the keyboard is actually smaller, even though it retains the same layout including a space bar with fingerprint sensor and the speed key.

That keyboard lacks the capacitive touch function found on the Key2 and KeyOne, meaning all scrolling will have to be done via the touchscreen. In a briefing, BlackBerry said it did this to appeal to traditional BlackBerry users who might be coming from older devices like the Classic who won’t want the capacitive keys. In reality, we suspect it’s a cost saver.

Having used the KeyOne and Key2, we missed the capactive keys a lot. We used them all the time to scroll without having to use the touchscreen, and have the keys are our thumbs for typing. On the LE, there’s a lot more thumb gymnastics involved, and your hands cover the small 4.5in display more than we’d like because of this.

The Key2 LE also has a headphone jack, USB-C port and the convenience key that you can program to any function you want – so you don’t lose anything here.

Overall this is a neat reimagining of the Key2 at a better price point, with differences enough to justify its launch. In a briefing, BlackBerry and TCL described it as a ‘unisex product’, which is to suggest its struggling to appeal to a female audience so far.

More of the differences are inside than out, though. Some corners have to be cut to get to the lower price point.

The 4.5in 3:2 1620x1080p IPS LCD is exactly the same panel as the one found in the Key2 and has exactly the same viewing angles and brightness calibration. Due to the lack of touch functions on the keyboard of the LE, it’s more important than ever that the display is up to task so it’s good to see the same on this cheaper model.

The odd 3:2 aspect ratio is still not for everyone though, and this isn’t the phone for you if you watch a lot of video or play mobile games frequently. It’s simply the wrong shape. Watching videos is not a fun experience, with black bars in most apps like Netflix making the viewable space tiny.

The Key2 LE has the Snapdragon 636 chip that’s also found in the Moto Z3 Play and Asus Zenfone 5. It’s known to be an energy efficient chip that manages battery life and power consumption in midrange phones such as this, and does a decent job of handling all the extra software BlackBerry adds to its version of Android.

Paired with 4GB RAM, it’s just about enough. But the Key2 LE clearly lags in areas where the Key2 (with 6GB) managed better. Even opening a single app sometimes takes a couple of seconds, not great if you’re the business-minded go-getter this phone is marketed at.

With 4GB RAM you can choose between 32GB or 64GB storage, but all versions have a microSD card slot to expand that.

But these specs are pretty standard for a midrange phone, and the Key2 LE is priced reasonably considering this. The below charts compare raw processing power (Geekbench) with various graphics tests (GFXBench). The results show the Key2 has a hand over the LE, and with the LE’s lower RAM it shows in everyday use.

Charging and data transfer is done via USB-C, and there’s a headphone jack on the top edge, so no need to live the dongle life here. The headphones included in the box are acceptable but nothing special.

The Key2 LE is meant last for 22 hours of use between charges and we found this to be true, but it’s notable that the battery is down to 3000mAh compared to the Key2’s 3500mAh. This is still an all-day phone that we didn’t have to worry about running out of juice, but it doesn’t convincingly last into a second day.

While there are dual cameras, they are a downgrade from the Key2. There’s a 13Mp f/2.2 main sensor and a 5Mp f/2.4 that allows for depth sensing bokeh effect photos. Given the Key2 was hardly a camera champ, we didn’t hold out for many impressive shots from the Key2 LE.

This is not the phone to go for if smartphone photography is your primary concern, and TCL knows that. It takes fine photos in daylight, but struggles in low light and the front camera is merely passable for selfies, though fine for video calling.

You may need to click on the below image to view the gallery: 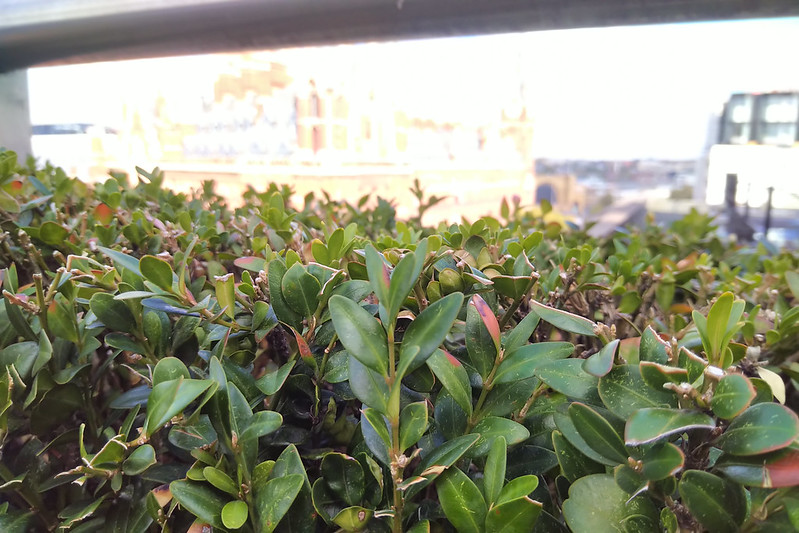 The Key2 LE has the same Android 8.1 Oreo version found on the Key2, which is great. This means it gets the Locker app where you can keep photos and entire apps out of the cloud for your privacy peace of mind, as well as the ability to hide apps from the app drawer entirely.

New for the LE but coming to other handsets is a dual app feature where you can clone Twitter, WhatsApp, Instagram or WeChat and run two accounts, with two app icons, simultaneously.  We still like the DTEK app that gives you an easy overview of the security of your device and gives you actionable recommendations to improve it.

But, as we found on the KeyOne, BlackBerry Hub slows the phone down. A hub for all (yes all) your notifications is not only an antiquated way to deal with notifications but it’s a total RAM-hog. Disable it and the LE will run smoother.

There are also annoying decisions like to have the virtual keyboard pop up by default out of the box when you tap a text field. You have to dig into the settings to turn it off. This is dumb on a phone with a physical keyboard.

Also new is the option to use the convenience key as a Google Assistant button; one tap to trigger, press and hold to use as a walkie-talkie or double tap to go straight to Google Lens. We like this on the Key2 LE as the button is fully mappable for whatever you want. Pay attention, Samsung and Bixby.

The BlackBerry Key2 LE is a well-priced mid-range phone that benefits from very similar design to the regular Key2. But performance issues let it down, and we recommend the Key2 over it.

You lose the capacitive touch keyboard and the keys are a touch smaller, but the lighter, smoother design is actually in some way preferable. As are the choice of colours.

If you are tempted by a BlackBerry in 2018, this could well be the one to plump for given the lower price. Just don’t expect amazing camera quality or the two day battery life of the regular Key2.