When Marvel rebooted Spider-Man a couple of years ago, some fans were quick to complain that there had simply been too many Spider-Man films in recent years, and that it was time to give the franchise a break. To those fans we say: tough luck, because this year we're getting not just one but six new Spider-People, and they're all in the same film.

Yup, Spider-Man: Into the Spider-Verse will feature multiple heroes donning the Spidey suit, and none of them will be played by Tom Holland, who's played the character in Captain America: Civil War, Spider-Man: Homecoming, and Avengers: Infinity War. That's because this new film is an entirely animated release, set in its own universe (well, spider-verse, we suppose).

We've had the chance to see it already, and you can go read our review right now to find out what we thought (spoiler: it's great) or find out about the film's post-credit scenes.

Spider-Man: Into the Spider-Verse is out in the UK and US now.

Its December release date was a bold one, putting the film up against DC hero Aquaman's debut solo film. Then again, Spider-Man is likely to shoot for a slightly younger audience, and historically Marvel films have more than held their own against DC at the box office, so it might be DC that should be worried.

It's a big year for Spidey fans too - not only are we getting this film, plus his appearance in Infinity War, but there's also a brand-new Spider-Man game out on PS4.

As we said above, the first thing to know about Into the Spider-Verse is that Tom Holland isn't in the film at all, despite playing Spidey in the MCU. That doesn't mean there's no Peter Parker - it's just that he'll be voiced by Jake Johnson (New Girl).

He's not the only Spider-Man around either. He'll be joined by Miles Morales - who comics fans will know as the mixed-race Spidey who first appeared in the spin-off Ultimates universe before making the move to the main Marvel comics world. In fact, he'll be the lead in Into the Spider-Verse, voiced by Shameik Moore (The Get Down), with Parker playing second fiddle this time around.

Hailee Steinfeld will also appear as Gwen Stacey, here in her Spider-Gwen incarnation, while John Mulaney, Kimiko Glenn, and Nicolas Cage (!!!) will also contribute voices as various other versions of Spider-Man - more on those later.

The rest of the voice cast will boast Liev Schreiber as Wilson Fisk aka the Kingpin (his second Marvel appearance, after playing Sabertooth in X-Men Origins: Wolverine), Brian Tyree Henry (of Atlanta), and Mahershala Ali, hot off the Oscar-winning Moonlight (and also a Marvel vet, having played one of the villains in Luke Cage).

Impressively, even for an animation, the film boasts three directors: Bob Persichetti, Rodney Rothman, and Peter Ramsey. The former two are making their directorial debuts, though Ramsey previously led on Rise of the Guardians.

Meanwhile the script comes from Phil Lord - his usual writing partner Chris Miller also helped develop the project, but isn't getting a writing credit. They're best known for 21 and 22 Jump Street and the Lego Movie, though gained a bit of notoriety recently after being removed from directing Solo: A Star Wars Story midway through production. Hopefully Into the Spider-Verse proved a better fit for their comic sensibilities.

So far there have been just two posters for the film: the first was a convention teaser from before the title was announced, while the second is a pretty simple affair with the graffiti-style logo and release date: 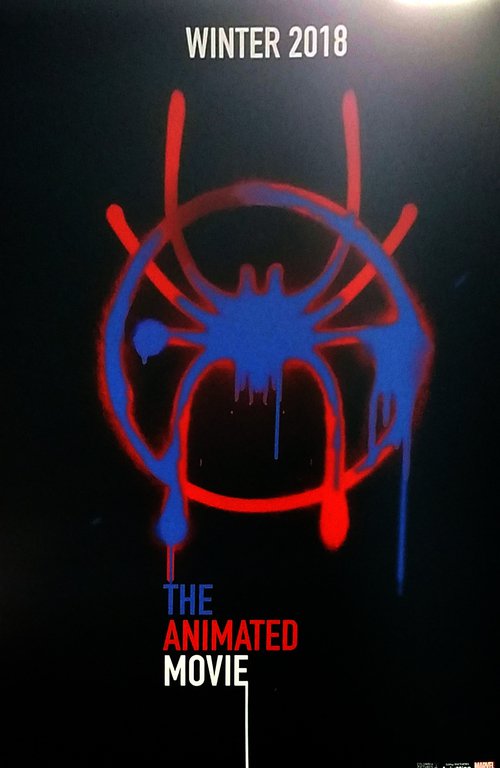 Beyond the posters there aren't many official stills from the film, but there are a few high-res frame grabs from the first trailer that give us a great look at it:

There have been three trailers so far, and they're all pretty great. The first teaser is simple enough: it introduces Miles Morales, teases the plot, and sets up the idea that Morales isn't the only Spider-Man around - and that there might even be quite a few of them:

The proper trailer is an altogether different affair: this shows us a lot more of the film, including a proper look at both Miles and Peter's Spider-Men, a glimpse at Miles's family life, our first look at the film's villain, and even the reveal of yet another member of the Spider-Verse.

Finally, the third trailer really leans into the Spider-Verse concept, giving us our first look in motion at the full team of six Spider-people. We also get a few more teases at the plot, which seems to include a particle collider accidentally bringing the various universes together, and threatening them all in the process:

In addition to the proper trailers, it's worth watching this 'extended sneak peek' - which is actually a lot shorter, despite the title - because it includes a few new riffs, a better look at the new cast of Spider-People, and shows off a so-far-unseen superpower for Miles:

And while it's not technically a trailer, you might also want to watch the music video for Sunflower, by Post Malone and Swae Lee, which features loads of footage from the film that we haven't seen anywhere else before:

Marvel has obviously kept quiet about the plot of Into the Spider-Verse, but we can figure a bit out, with the help of the two trailers and details from the footage shown off at San Diego Comic-Con. Some spoilers to follow obviously, so stop reading now if you want to be totally surprised come December.

Miles Morales is the main protagonist, complete with his black-and-red Spidey suit. He's going to meet up with another Spider-Man - Peter Parker, unsurprisingly - who will train him in how to use his powers. This isn't his universe's Parker though - he's actually dead, and the Parker of the film has come from another universe thanks to some unknown multidimensional shenanigans.

He's not the only one either. In the second trailer we see Spider-Gwen swing into action, while the third reveals three more Spider-Men making appearances: Spider-Ham, a sentient spider-pig to be voiced by John Mulaney; Peni Parker, a young girl who pilots a mech named SP//dr, voiced by Kimiko Glenn; and, most excitingly, Spider-Man Noir, a gun-toting, hard-boiled killer voiced by the legendary Nicolas Cage.

Villain-wise, we've also now had a great look at Green Goblin in smashy action, along with Kingpin and The Prowler - all in their Ultimate universe forms. Goblin is there fighting Parker when he and Miles find each other, so might just be an early villain, but Prowler pops up in a fight with both Spideys in costume, so we'd hazard a guess he's a later threat - perhaps on the orders of Kingpin, who's probably the true big bad here.