One of the longest running action franchises around is back, as Tom Cruise returns as Ethan Hunt for the sixth time in Mission: Impossible - Fallout.

That means more ludicrous stuntwork, silly gadgets, and face-changing masks, all in the name of saving the world from something or other and throwing Tom Cruise off something very tall. Here's everything you need to know about Mission: Impossible 6.

We've already seen the film, so read our Mission: Impossible - Fallout review to find out how it shapes up (spoiler: it's very, very, very good) or find out whether or not the film has a post-credit scene.

We also now what special features to expect from the new release, though bear in mind that these may vary slightly by format and region:

It goes without saying that Tom Cruise is of course back as Ethan Hunt - can you really imagine a Mission: Impossible film without him?

Ving Rhames - the only other actor to appear in every film in the franchise - is also back, as is Simon Pegg, a series staple since the third film. Rebecca Ferguson, clearly the standout star of 2015's Rogue Nation, is also back as Ilsa Faust.

Normally that's about as many returning actors as you could expect from a Mission: Impossible film, but Fallout appears to be an exception, with a story that seems to continue on from Rogue Nation. Alec Baldwin returns from that film, as the new head of the Impossible Mission Force (IMF), as does Sean Harris, reprising his role as the villain Solomon Lane.

Finally, the biggest surprise is the return of Michelle Monaghan, as Ethan Hunt's wife Julia. After playing a major role in Mission: Impossible 3, she was last seen in a brief cameo at the end of Ghost Protocol, but appears to have a bigger role to play this time around.

Right, so that's all the familiar faces. Who's new? Well, for one there's Henry Cavill, Superman himself, sporting the bushy mustache that Warner Bros. had to awkwardly remove from Justice League using some rather expensive (and frankly rubbish) CGI.  He's playing August Walker, a CIA agent who we guess will be at odds with Hunt, right up until they realise they're on the same side.

His boss at the CIA will be played by Angela Bassett, the final major player in the cast, who appears to be on cold, uncaring form from the footage so far. Vanessa Kirby (of The Crown) will also be appearing in an as-yet unknown role.

Behind the scenes, Christopher McQuarrie is the first director to ever stick around for a second film in the franchise, directing his own script - just as he did for Rogue Nation.

The first anyone actually saw of the film came not from official press sources, but from Tom Cruise himself - the actor opened up an Instagram account seemingly for the sake of promoting the film, revealing first the title and then this image of his stuntwork in action:

We’ve upped the ante for the sixth #MissionImpossible. I can’t wait for you guys to see more.

Not long after that we were treated to the first poster, and since then we've had a deluge of character posters for absolutely everybody in the film. Click through to check them out: 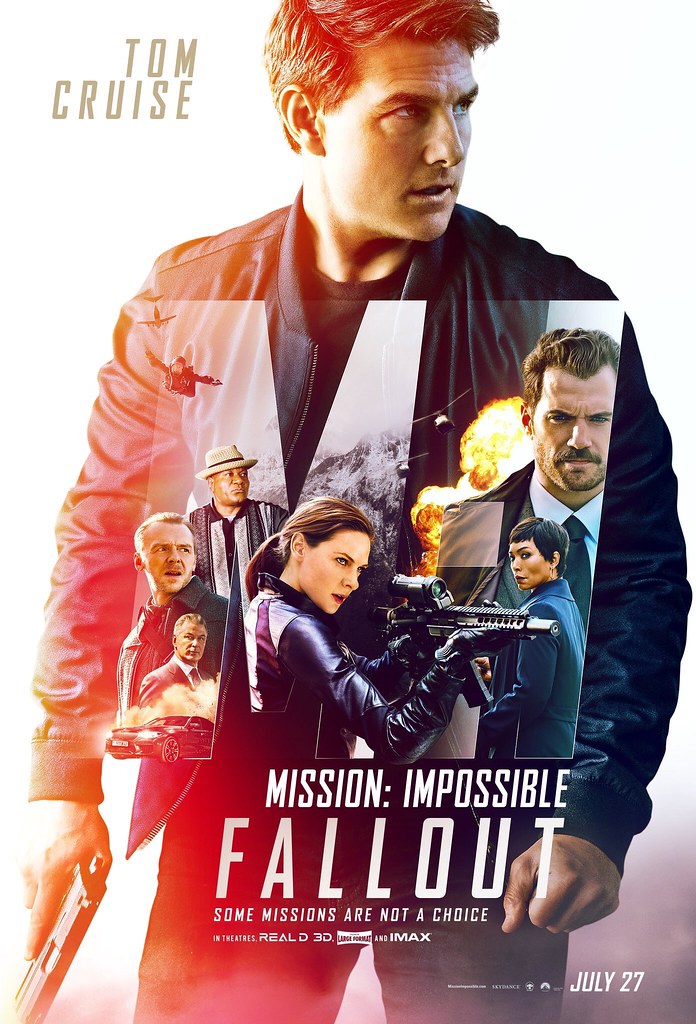 Finally, a few of the official stills give us a better look at the rest of the team - including Cavill's voluptuous mustache - in action:

So far we've had two trailer for the film. You can watch the first right here:

Then here's the second, released in May, which gives us a much clearer look at the film's plot, and specifically Henry Cavill's role, along with more ludicrous stunts:

In addition to that, you might want to check out this official featurette on the making of one of the film's biggest stunt sequences, in which Tom Cruise flies a helicopter. No, not Ethan Hunt - Tom Cruise. The actor actually learned how to fly a chopper himself to film an aerial chase scene:

That's not even the film's biggest stunt though. That honour (probably) goes to a HALO (High Altitude Low Open) jump sequence that Cruise obviously insisted on doing for real - becoming the first actor to ever do a real HALO jump for a movie. Watch the video to find out exactly how mental that is:

Oh, and on a similar note, here's one that's not for the squeamish. At one point during production Cruise actually broke his ankle doing an entirely different stunt - jumping between rooftops, as you do - prompting a temporary production hiatus. The cast later appeared on The Graham Norton Show to share the footage of that accident, including the very unpleasant angle his foot gets bent into:

First up, here's the film's official synopsis from studio Paramount:

Which tells us almost exactly nothing. The trailers (above) give us a little more to go on. It looks like a mission in Berlin goes wrong, leaving some plutonium in the hands of some bad dudes, presumably including Sean Harris's Solomon Lane. That's when the CIA - including Cavill - steps in to resolve the situation.

Because this is Mission: Impossible, it looks like Cruise's character is going to have to go rogue to sort things out, and along the way will come into conflict with Ferguson's Faust and Cavill's CIA assassin - though we'd be surprised if they don't end up on the same team again by the end of it all.