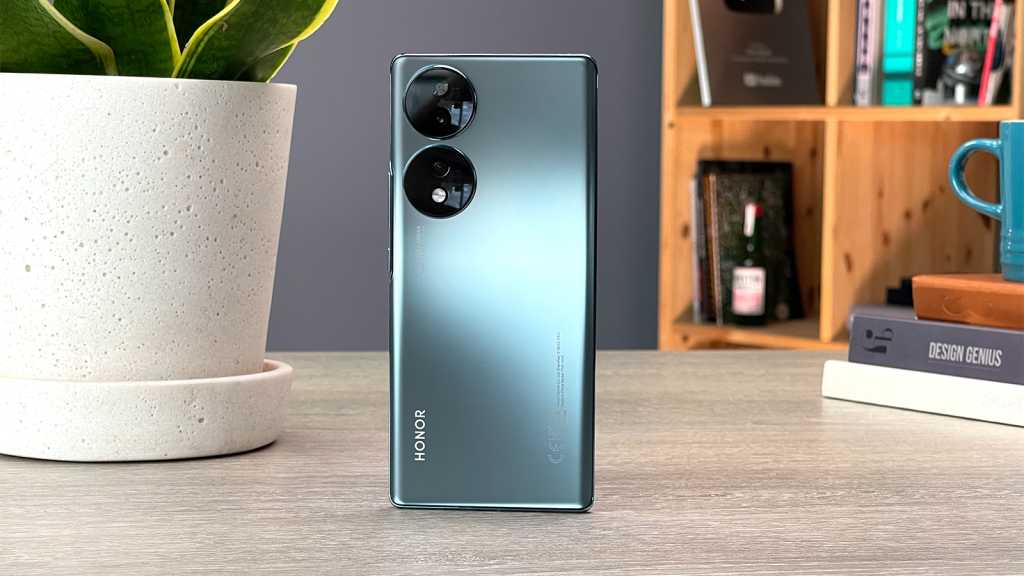 Henry Burrell / Foundry
At a glance

The Honor 70 has a great screen, design, and main camera that help it stand out in the busy mid-range phone market. It’s let down by old feeling software with poor support but this is a confident step forward from the company.

Honor has split from former parent company Huawei, but the new Honor 70 still feels like a Huawei phone.

This isn’t a bad thing. Huawei made some of the best Android phones of recent years before a US trade ban meant it could not release new ones with Google services or the Play Store.

Honor’s phone release frequency in Europe took a knock but is not part of the ban. It has been slowly rebuilding its market presence – and use of Google services – by releasing excellent devices like the Magic 4 Pro and now the Honor 70, a mid-range phone with solid performance, great cameras, and attractive design.

It just feels like Honor is still playing it quite safe where it needs to push on and differentiate itself – from current rival manufacturers as well as the Huawei of old.

Starting with the stunning looks is as good a place as any. The Honor 70 is a head turner in a market where it’s difficult for slab screen phones to stand out.

My review unit came in a lovely matt green finish that hides fingerprints very well, though the most eye-catching version is a glossy silver one with diamond pattern on the back. There’s also a black one, of course. Though it looks and feels premium, the phone is made from plastic. In a way, I prefer this to glass because it’s less likely to shatter if dropped, though it does mean it’s more prone to scratches and rules out wireless charging.

Two large circular islands stick out the top left of the phone and house the triple cameras and flash in a striking look. The phone has some text on the back with unnecessary camera specs and the necessary EU trade script. As always, there’s no doubt it’d look slicker with just the company logo.

Many high-end phones have curved displays, but the mid-range Honor 70 goes for it too. I quite like curved screens as they make phones feel slimmer and narrower in the hand, as is the case here. The volume rocker and power button sit on the thin right edge, with a USB-C port on the bottom next to the SIM tray and the sole mono speaker.

The other is in the earpiece just above a centrally placed cut-out selfie camera. All these choices on paper feel like smartphone 2022 101, but the Honor 70 looks like more than the sum of its parts. It’s a design I really dig.

One downside, tough, is the lack of waterproofing when for this price I’d expect at least a splashproof rating.

The phone’s 6.67in 1080 x 2400 OLED display is very large thanks to a tall 20:9 aspect ratio. I have small hands and found it impossible to use one-handed for anything but pure scrolling or swipe typing at a push. Thankfully the 120Hz refresh rate means such scrolling is very smooth but it’s easy to tell this is a cheaper panel than the more expensive Honor Magic 4 Pro or OnePlus 10 Pro.

As with many other curved screens, there is a hint of darkening as its left and right sides slope away when viewing bright content head-on, but it didn’t spoil my day-to-day use of the phone. If anything, the curves make it easier to use Android back gestures by swiping in from either side.

Brightness is good if below the top levels of more expensive phones, but I had no trouble seeing anything in direct sunlight, which isn’t always the case for a phone of this price.

Audio from the mono speaker is firmly middle of the road. They’re fine for a few YouTube videos and podcasts but you won’t want to be blasting music or films for any length of time, and I expected dual stereo speakers at this price. The lack of a headphone jack means you’ll have to plug in with USB-C wired headphones or go wireless.

The phone came with a pre-installed screen protector that I soon removed because it felt cheap and got scratched very easily.

In my time with the phone, the chipset is plenty fast enough. Apps open quickly and the UI is responsive thanks to the 8GB RAM (there is a 12GB model available in China but not Europe). It chugged marginally when playing high-end games like Call of Duty Mobile, but for most normal smartphone use – social media, light games, music, photos – it’s all you will need. It’s the level of chip you can expect for the price in 2022.

In Geekbench 5 and GFXBench benchmark tests, the Honor 70 performed better than The Honor 50 or Google Pixel 6a, but marginally below older flagship phones like the OnePlus 9.

5G connectivity is storming its way down the price bands to support practically every new phone, so you get that here too.

Slightly disappointing is the vibration haptics, which feels mushy. Keyboard feedback on cheaper phones like the Google Pixel 6a is tight and clipped. Honor’s is buzzy and detracts from the premium feel of the handset.

On a bright note, the in-screen fingerprint sensor is responsive and reliable for unlocking the phone or verifying your biometrics, but there’s also a very zippy face unlock option.

The £399/€469 Nothing Phone (1) has ruined my expectations of mid-range phones by including wireless charging. It’s not here on the Honor 70, but it’s on hardly any other phone in the mid-range, so I can’t knock Honor too hard.

A 4800mAh battery in a mid-range phone is cause for celebration. In the PC Mark battery drain test it lasted nine hours and 28 minutes, though I found real-world battery life to be much better than that figure suggests.

The Honor 70 performs very well and can easily last a day even with heavy usage. It will stretch into two days if you are a light user, and you can always fall back on the fast charging if you need to top up on days where you’re taking tons of photos or using Google Maps to navigate – sure fire battery beaters.

The Honor 70 is the first smartphone to use the Sony IMX800 sensor for its main 54Mp camera lens.

What does that mean? Great photos, thankfully. On bright sunny days, it absolutely sings, with excellent colour reproduction, solid dynamic range, and good detail. There’s fairly good colour consistency between this main lens and the 50Mp ultrawide too, which you don’t often see on phones at this price.

The ultra-wide is also used for solid macro shots. Nice one, Honor. However, the cameras fare less well in low light. Even shots in shadow rather than darkness aren’t rendered accurately, with a little greying to the overall image. In low light shots indoors this is even more apparent.

On the plus side, I really like the portrait mode on the phone – assisted by a 2Mp depth sensor – though you’ll probably want to turn off the annoying beauty modes that are on by default.

There’s no telephoto lens, so you must fall back on digital zoom. I didn’t, as it isn’t great and photos end up looking like watercolours when you go past 2x. The 32Mp selfie camera is solid for selfies and videos but struggles in direct sunlight, as many of these small sensors tend to.

You can swipe through the below slideshow to see images from all the Honor 70’s lenses.

When hardware can be stretched at this price, software steps in. Honor’s headline camera feature for the Honor 70 is called solo cut. It uses the rear cameras to take a wide-angle landscape video of a scene while allowing you to tap onto a person in the scene, who is then tracked in a separate portrait video.

This is displayed on the screen in a small window so you can make sure they’re in the frame. You can switch to someone else part way through too.

I didn’t find much use for it, clever as it is, but it could be good at children’s plays or at gigs to follow the subject you’re interested in while also taking in the whole stage, for example.

The Honor 70 has the same software look and feel of a Huawei or Honor phone from two or so years ago. It’s basically EMUI, Huawei’s old software.

After a few days with the phone, I became accustomed to it again, but it does feel a little dated. Although it’s running Android 12, the phone feels more like it’s on Android 10 because Honor hasn’t changed much about Magic UI 6.1 or adopted any of Android 12’s cool theming options or more modern design aesthetic.

The company tells me Magic UI will rebrand to Magic OS with the next version, and it is promising a visual update. What would also be nice is less bloatware as you get the likes of Booking.com, TikTok, Game of Sultans, Lords Mobile and more – though you can uninstall them, fortunately.

Honor should also work on providing longer software support. The Honor 70 will get three years of security updates but only two Android platform updates. This is much less than Samsung’s five years and four years respectively, and Honor will need to do better if it hopes people will hold onto its phones for longer.

If you buy the phone before 16 September from some of these retailers, you can get a free pair of the Honor Earbuds 3 Pro. You can also buy the Honor 70 directly from Amazon France, Amazon Spain, and other popular European retailers.

An 8/256GB model is available in black or green exclusively through operators Three and Vodafone in the UK. In Europe, that version will retail for €599 but neither will be on sale in the US, where Honor does not operate.

It puts the Honor 70 in direct competition with the $449/£399/€459 Pixel 6a, which has Android 13, longer software support, and much better cameras. The £369/€399 OnePlus Nord 2T is also less than the 70 with faster charging and a glass construction, but Honor’s phone has a higher refresh rate display.

The Honor 70 is an accomplished mid-range phone, a confident step forward for the company after its breakaway from Huawei. With Google services and apps, a thoughtful and attractive design, strong performance, and good battery life, this is one of the better phones in this price range in the UK and Europe – sorry US friends.

It’s hard to fully recommend it though when the Pixel 6a is cheaper, is similarly plastic but has a superlative camera set up and a better version of Android (with longer support to boot), while the Nothing Phone (1) also undercuts the Honor in price too and adds in wireless charging.

But with a 120Hz display and very good main camera, the Honor 70 is a solid choice and takes it to phones like the OnePlus Nord 2T – though that phone is also cheaper.

If Honor’s next mid-range phone can boost the software promise and shrink the price, it will have a real winner on its hands.