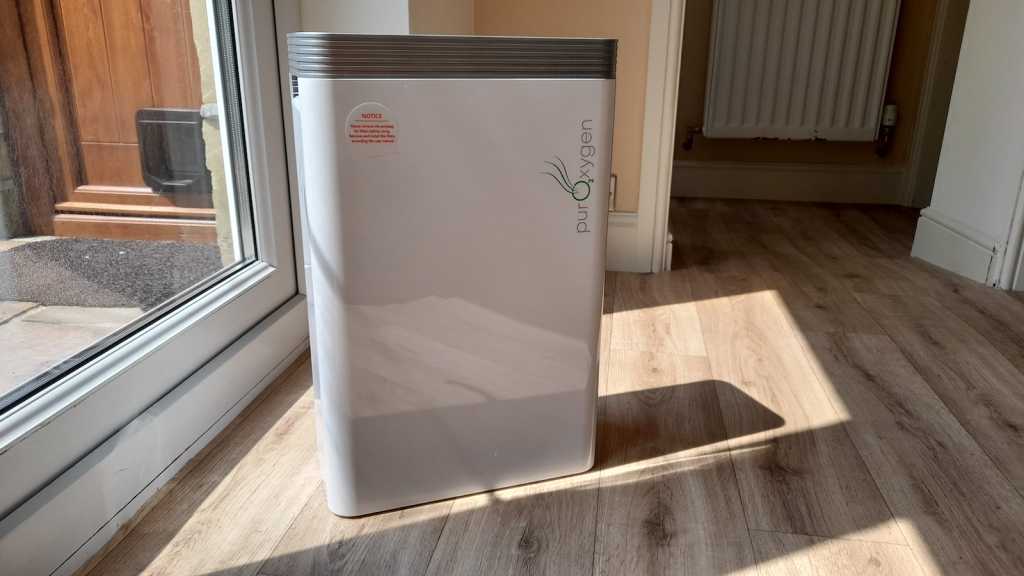 Alex Greenwood / Foundry
At a glance

The PurOxygen P500 may not be the most stylish air purifier on the market, but its six-stage filter process certainly delivers clean air at a fast rate.

The P500 has a utilitarian look, with a white plastic rectangular body, silver trim and a black grille. It stands on the floor, 51cm tall by 33cm long and 17cm wide, with a white 180cm long cable sprouting out of its base.

With handles either side of the silver trim, and a weight of only 4.5kg, you can move it around easily. It comes with a small remote control that fits in the palm of your hand.

But you could be forgiven for thinking that this air purifier is nothing much … until you see the filter.

All about the filter

PurOxygen says that the P500 removes 99.98% of airborne contaminants, such as pet dander, mould, dust, viruses and bacteria. It tackles smoke, controls odours, and helps against respiratory diseases. Once you see the filter, you understand why.

There’s four layers to it. The prefilter is designed to trap particles one micron in size and larger, and identifies and filters out dust, hair, and dander, enhancing the power of the following HEPA filter layer.

The HEPA HII filter catches particles above 0.3 microns in size and 95% to 99% of particles below 0.3 microns.

Next, there’s an activated carbon layer, which, with the HEPA filter, removes almost all airborne pollutants, such as pet odours, decoration pollution or smoke smells.

And the final layer is cold catalyst filtration, which is designed to control pollution under normal living conditions. PurOxygen states that this layer will decompose harmful gases (also known as volatile organic compounds or VOCs), such as formaldehyde, smoke smells and decoration fumes.

And that’s not all. The air purifier also has a negative ion generator, which filters dust, pollen, pet dander, mould spores and other potential allergens from the air.

Then there is a UV light sanitiser, which is used to kill germs, allergens, bacteria, mould, pollen and viruses. PurOxygen says this helps to improve the air quality by removing common causes of illness and allergic reactions and is especially recommended for use by those with a compromised immune system, asthma or allergies.

There are two methods of controlling the air purifier: the circular control panel on the unit and the remote control.

The panel on the unit has four buttons: one to power on and off, one to change the speed of the fan or switch it to automatic, one to turn on the sleep mode, and one to set a timer between one and twelve hours to turn off the machine.

By pressing two button combinations, you can display the room temperature, turn the child lock on and off, turn the UV filter on and off, or reset the filter’s life management function.

The remote gives you the same controls, with the addition of being able to turn the ioniser on and off through the function button.

The air purifier plays three tones when you turn it on, which is a nice touch, and it starts automatically.

There is a slightly plasticky smell at first, but that disappears quickly.

On the control panel, there’s a light indicator circle and an air quality indicator that reveals information about particulate matter in the air. The light displays the air quality in terms of a colour spectrum, so green is excellent, blue is good, yellow is medium, and red is poor.

The air quality indicator counts down to cleaner air as the purifier is working; the indicator goes from 0 to 500, with anything below 50 good.

It was quite tricky to test the performance of the air purifier as atmospheric conditions were so good, but we experimented with decoration fumes.

We put the purifier in a room with a freshly painted ceiling. It initially registered the air quality as blue with a figure of 84, and it only took six minutes of purifier operation on speed 2 to lower this to green with a figure of 8.

We also tried burnt toast, wafting it by the purifier. The air quality registered as red, then plummeted dramatically down to green after only a few seconds.

The sleep mode turns off the UV light and runs the appliance at a low speed, which if you like white noise while you are sleeping, may be a touch too quiet for you.

The purifier doesn’t have smart features. But although you can’t operate it from your smart phone, the remote control may be more convenient for some.

PurOxygen says you need to clean the filter every two months, either by exposing it to sunlight for one to three hours or by vacuuming it.

There are a couple of things to note though. You can’t use the purifier in a room with a temperature below freezing, or above 40°C, so do double-check on a freakishly hot day.

The P500 is a 45W appliance. This is roughly average for an appliance of this type; the power consumption is roughly similar to a small laptop or Sky box.

You’ll also need to factor in the cost of replacement filters, which you can buy from Amazon for $39.97. PurOxygen doesn’t given an estimate of how long a filter should last as it’ll depend on your air quality.

This is PurOxygen’s only air purifier. It’s available in the US from a number of retailers, including Sears and Treblab, but the best current price we can find is from Amazon, where it’s $149.97.

It’s only available in a limited capacity in the UK. Yes, you can buy it from Amazon, but it’s extremely expensive and we wouldn’t recommend it at its current price of £387.77.

With the P500, you are compromising on aesthetics for an effective six-stage filtration process that’ll work on particle matter and gases. You may be looking at a white plastic unit with a conventional intake vent, but you are getting an ioniser and a cold catalyst filtration layer, and a HEPA II quality filter.

We think this trade off is worth it. If you want an effective air purifier that does that little bit extra for a reasonable price point, the P500 is definitely worth a look.

To read up on other models we’ve reviewed and to see how the P500 measures up, have a look at our round-up of the best air purifiers we’ve tested.