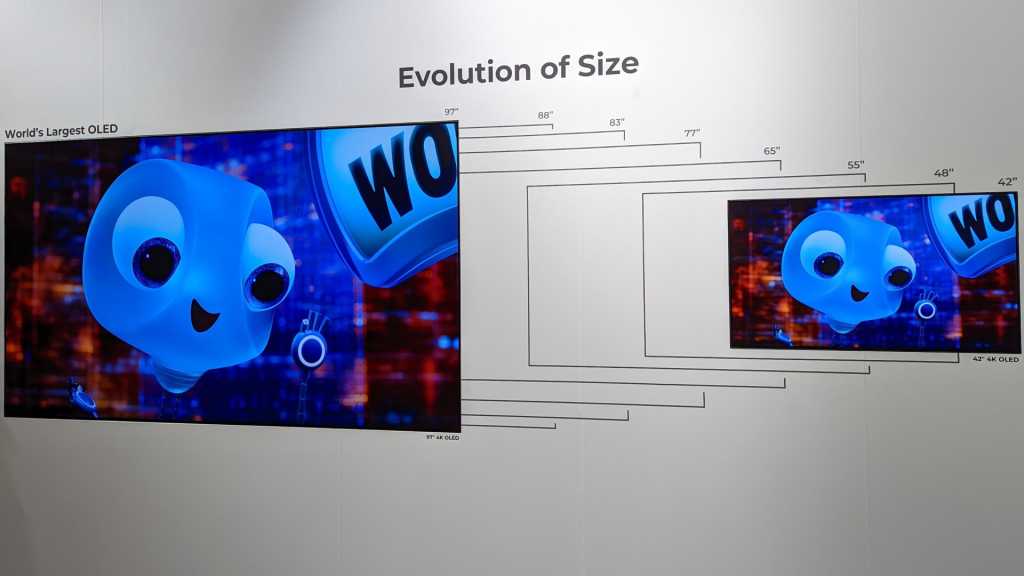 For most of the brands at IFA 2022, the big TV news was exactly that – really big TVs but I’d rather the manufacturers were going in a different direction.

Crazily big TVs aren’t anything new, especially at trade shows where the big players like to show off their latest wares. However, those wares in terms of giant TVs have almost always been just concepts and for the sake of it.

When Samsung first introduced The Wall back in 2018 at CES where modular panels using Micro LED tech meant you could build a huge TV up to 148in, it was a marvel, but not something anyone was going to go out and buy that year or even the next.

Fast forward to 2022 and the big names now genuinely have crazily big TVs you’ll be able to purchase and ones without a grid of lines interrupting the experience due to it essentially being made up of many small TVs.

They’re not quite as big as the original The Wall yet but it seems that there’s an arms race of sorts on when it comes to getting to the magical 100in number for a modern flagship consumer TV you can go down to your local technology store and try and awkwardly balance in a trolley and wheel to the til (then fail to get in your car).

The first TV to catch my eye was the 97in version of LG’s flagship G2 OLED, which is officially the world’s largest OLED TV. It’s a thing of beauty and LG was very keen to point out that the set is as large as a queen-size bed.

Over on the Samsung stand, the firm was demoing its 98in Neo QLED (that’s Mini LED tech) model with a whopping 5,000 nits of brightness. I was, no joke, struggling to take photos of it as my camera was blinded by all the light blasting out.

There was also a stunning 8K Neo QLED set in an 85in size and then a whole area dedicated to huge Micro LED panels stretching from 89- to 114in.

Not wanting to be left out, TCL also had a plethora of huge ‘XL’ TVs with QLED and Mini-LED models on show, up to a huge 98in. It also had a 136in Mini LED set with a reflective marble stand called The Cinema Wall. LG also had a Micro LED set on display at that same size.

TCL touting the “world’s largest Mini LED TV” – which I assume refers to the Cinema Wall – makes it ring loud and clear as to what these brands want to win on right now since there’s no new panel technology.

Don’t get me wrong, I love checking these things out when I get to come to big tech shows like this. Though, of course, they’re running purpose-made demo reels and almost certainly have settings pushed to maximum to make them look as impressive as possible.

However, after the initial amazement of seeing these devices had subsided, I got thinking about who they’re actually for and whether there’s any point.

On the one hand, I love the idea of having a big screen like that at home for watching movies and sports in super size. When I was younger, my parents had a reasonably good projector, and we’d watch Formula 1 on a Sunday afternoon at what was probably around 100in.

It was great but required a lot of faffing about – the wall it was projected onto was painted white in order to not affect colour and blackout blinds had to be put up around all the windows. And even then, the picture was clearly a lot worse than our normal TV.

These super-size TVs could signal the end for projectors, though perhaps not everyone wants a huge TV looming over the space when it’s not in use.

How big is your house?

I can think of a whole bunch of bigger problems here though, starting with the obvious. Where do you put one? Ok, I’m coming at this from a very British point of view where we have small houses so forgive me.

I was lucky to fit a 55in TV into the alcove of my living room and have a few millimetres to spare on either side, but even if you can easily fit a 100in TV into your living room, you’re probably in the minority.

Deceivingly, these things don’t look too big due to being in IFA halls the size of an aircraft hangar but get up close and you suddenly get perspective. Some are taller than me and I’m over 6ft.

How deep is your pocket?

If you can tick the big enough room box, the next question is can you afford one of these sets? By all accounts, the 97in LG G2 OLED is set to cost €25,000 which could buy you a seriously nice car or a deposit on a house.

That’s an achievable sum for some people but a Samsung representative told me only the smallest 89in size of the Micro LED sets would be under the €100,000 mark. Yes, that is the correct number of zeros and I almost spat my pretzel out on hearing this news.

There’s also the question of running costs, which the brands at IFA are avoiding talking about. As more tech gets crammed into these sets, albeit crammed perhaps isn’t the right word when they’re so big, the power needed to run them is also significantly increased.

Again, I’m a little biased as things are worse in the UK at the moment in terms of energy costs so forgive me, but it’s going to cost you an arm and a leg to get one of these TVs and then the other limbs to pay the electricity bill – it’s just less obvious than the cost of filling your car with fuel.

Perhaps, though, and to end on a strange positive of sorts, the amount of warmth coming off these sets will mean you don’t need to put the heating on this winter while you’re watching the latest big must-see movie.

I’m joking about that, even if some of the execs at IFA were not. What I’d much prefer is if these brands were driving things forward in terms of eco-friendly, sustainable products beyond using recycled cardboard boxes with no colour ink or polystyrene.