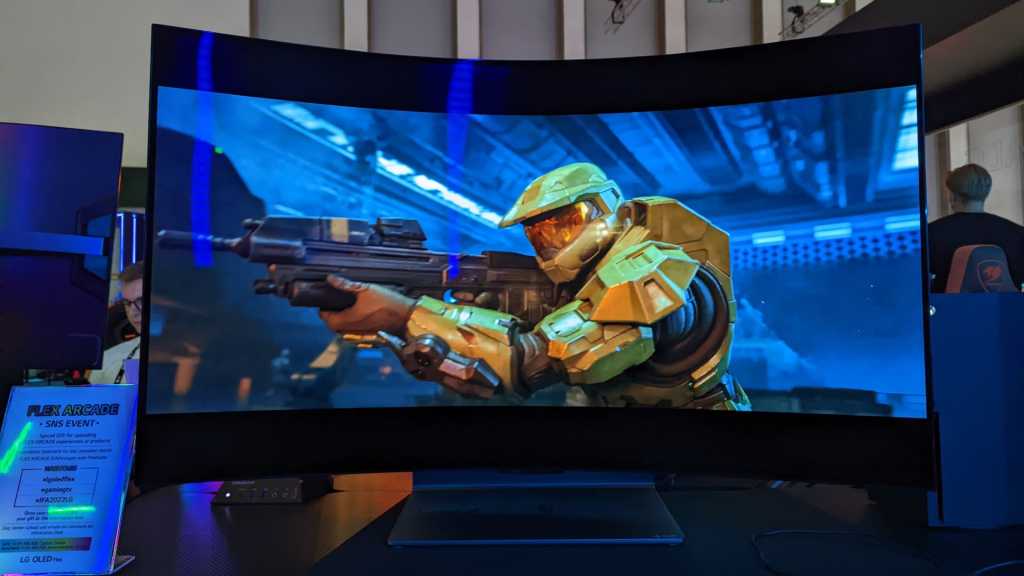 One of the head turners at IFA 2022 this year is LG’s TV come gaming monitor hybrid, the OLED Flex, and it represents the bendable screen coming of age.

Displays that can move from being flat to curved are nothing new. I first saw Samsung demo one at CES way back in 2014, but back then it was more of a ‘here’s something we can do to show off’, rather than offering consumers a genuinely useful feature.

That Samsung model was a huge 85in TV, but LG has figured out that transforming tech is much better in a smaller form factor.

The OLED Flex is infinitely more manageable at 42in, although I’d still be asking for someone’s help to unbox it or move it around. Still, it’s a viable option to place on a desk, but equally, it could also be the main TV in your living room.

What LG has essentially done here is taken its excellent C2 OLED TV and attached it to a bendable frame and a fancy stand. It’s sort of a shame that you won’t see the back once the OLED Flex is in position because it looks incredibly cool.

Two motorised arms stick out from the middle of the stand, reaching toward the edges of the display. These then push or pull the screen to bend it into position on command. It really is like that Simpsons episode where Homer is making his hospital bed move up and down repeatedly.

More than a gimmick

Unlike Samsung’s early tech, this is no mere concept that’s nice to look at during a tech show. LG has really thought carefully about how people will use the OLED Flex in different places and for different tasks. Handy or flashy features like a USB hub and LED lighting aside, the display has a bunch of clever controls and features that make it extremely versatile.

For starters, there are two presets to quickly move the display between two positions, but it’s not just flat or fully curved on offer. There are no less than 20 different positions you can set it to, meaning you can get it just right for your viewing distance or personal preference, even between different games.

Furthermore, the stand has 14cm of height adjustment and there’s plenty of tilt, too. So, if the OLED Flex is your main TV and you want to go from watching Stranger Things on the sofa to firing up the Xbox for some Elden ring, you could, for example, move to a beanbag in front of it for a totally different experience.

Those that think it’s too large for gaming don’t have to play at 42in either. LG has made it possible to easily resize the content to 32- or 27in, meaning you can play without moving your head to see the extremities. However, you can’t do this in 4:3 aspect ratio, which is a shame.

Since this is the same OLED evo panel as the C2, there’s no question of image quality, and there’s a long list of high-end specs which you can find out more about in our review of that TV if you’re interested. I played some Halo Infinite on the OLED Flex for a while at the full 900R curve setting, and it was simply stunning.

However, I do have concerns about the longevity of the screen. We’ve seen issues with foldable phones and although this is a much simpler, more subtle, bend and won’t be moved half as often, I do wonder what it’ll be like after a year or two of use.

I’m mostly saying this as the main unit LG was demoing on the IFA show floor was definitely not completely flat when in that position. The arm of the left side seemingly couldn’t get the display all the way back, leaving a very slight bend in it – sadly this is near impossible to take a photo of to show you.

For now, I’ll give LG the benefit of the doubt here as it’s likely an early model that has been abused by constantly showing people what the device can do – a la Homer Simpson style.

The other question that remains about the OLED Flex is how much it’ll cost. LG wants to get it launched in October ahead of the World Cup, but even if it does, you might need to remortgage your house to buy one.

If I suddenly came into a boatload of cash and needed a new TV, the OLED Flex would certainly be at the top of my wish list. Find out what won our Best of IFA 2022 awards along with the OLED Flex.