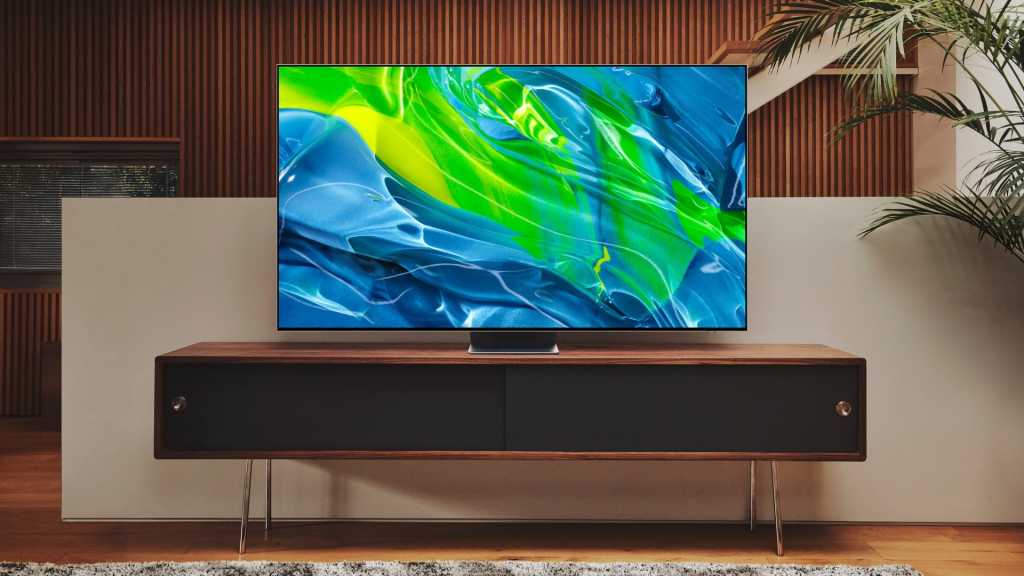 The Samsung S95B QD-OLED is the first of a new breed of 4k HDR TVs from the brand, boasting superb dynamics, ribald colour and a rock-solid smart platform. The future of OLED has never looked brighter.

While Neo QLED seemingly remains Samsung’s flagship screen technology, the S95B is the panel everyone is talking about. The first QD-OLED display from the brand, it merges the benefits of Quantum Dot colour volume with OLED’s perfect black level and cosmetic appeal.

The screen barely looks big enough to incorporate immersive audio, but squirrelled on the rear jack pack are height and side drivers, to complement the forward facing array.  If you do want to upgrade the panel’s audio performance, you can pass Dolby Atmos through to an external soundbar or system.

It ships with a solar-powered  remote control, which should save on batteries in the long term, as well as a standard zapper.

The big story here is the arrival of the QD-OLED panel itself.

The big story here is the arrival of the QD-OLED panel itself.

The clever change that separates this iteration of OLED from what we routinely see from products based on screens made by LG Display, is the application of a Quantum Dot layer to derive colour from a single blue OLED source.

The result is a screen with higher overall brightness and improved colour fidelity, without sacrificing black level performance or viewing angle.

Doing much of the associated heavy lifting is Samsung’s Neural Quantum Processor, which leverages AI smarts to optimise imagery in real time, as well as add additional nuance and believability to HD upscaling.

HDR support is adequate, but falls frustratingly short of what you might expect from a premium telly. Yes, we’re once again talking about the absence of Dolby Vision from this Samsung’s HDR armoury. This omission could be a deal breaker for movie fans.

Smart functionality comes via Samsung’s Tizen platform, which has undergone a cosmetic revamp; the update does seem to involve a fair amount of navigational clicking.

This Samsung QD OLED delivers unparalleled peak brightness when it comes to HDR. We’ve seen LG Display make big advances with its OLED.EX panel technology in this regard, but QD OLED is an even more obvious advance.

For all its sophistication, the S95B isn’t a challenging set to live with. The Neural Quantum Processor offers an AI-driven Optimization mode for sound and vision that analyses content and your viewing environment, and adjusts accordingly. With AI Optimization engaged you can flip from House of the Dragon (n 4k HDR on Sky Atlantic) to Sky Sports F1 in UHD HDR, and the set looks equally impressive with both.

If you’re migrating from an LED TV then the S95B will likely be right up your street. It’s a great bright room TV. But if you’re approaching it from an OLED viewpoint, it may seem overly luminous, unsubtle even.

You can spend an inordinate amount of time tweaking settings to ‘defuse’ this inherent pop, or choose to run it in its cinema modes, but that’s largely ignoring its key appeal. A bit like buying a Ferrari to only drive around town.

The movie mode significantly dulls the S95B’s image, much like Filmmaker mode.

Conversely, the Dynamic setting is too over saturated for comfortable viewing; skin tones are less than believable. If you choose not to let AI manage settings, Standard would be our chosen default.

The set’s HDR performance is phenomenal. We measured peak HDR in excess of 1400 nits using a 5 per cent window. It measures less on a standard 10 per cent window, but the former is more indicative of how HDR is typically used creatively.

Even so, the screen still manages to reveal near shadow detail above true black; gradations are smooth and banding is banished.

As a gaming display, the S95B has much to recommend it, but image wise, I actually think the Game setting is a bit too over cranked. Call of Duty Warzone looks a tad more cartoonish than on rival displays, with over saturated hues. 4k 120fps playback is nice and smooth.

Audio is surprisingly good for a TV this thin. Samsung has invested in height, width and centre drivers, which together make a loud, fulsome noise. Powered output is rated at 40W. While the inclusion of higher-placed drivers increases the scale of sound, there’s no sense of immersion, so upgrading to a separate sound system at some point still makes sense.

You can buy them direct from Samsung.

At the time of review, discounts were plentiful, so don’t consider those the prices you’ll actually pay.

Although obviously premium, these prices (especially with the discounts) are actually quite competitive for such a cutting-edge display. Panasonic’s LZ2000 55- and 65-inch screens with their Master Pro OLED panels are more expensive, as is LG’s interior-design friendly G (Gallery) series.

The Samsung S95B is an outstanding 4k display. It combines the brightness of a high spec LED TV, with superior black level performance of OLED, while managing to incorporate a decent sound system into its impressive LaserSlim design.

The S95B’s HDR handling is remarkable, but the lack of Dolby Vision remains an irritant at this price. Its overall brightness will appeal to many, particularly those primarily seeking a bright room display; conversely, its generally bright demeanour doesn’t particularly serve gamers or movie fans.

You can dive into settings to moderate this, but if such pop isn’t to your taste then the S95B probably isn’t for you.

Overall we think the S95B is a spectacular debut for Samsung’s QD-OLED technology, and one that costs less than you might imagine. It’s definitely an OLED to shortlist.