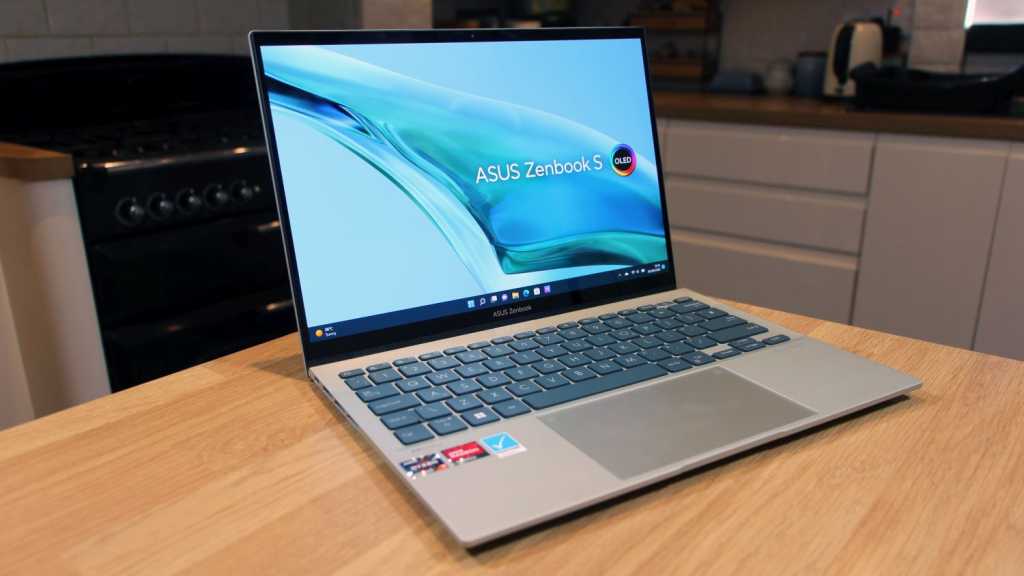 The Asus ZenBook S 13 OLED impresses in several key departments: the display is brilliant, the AMD processor is fast, and its keyboard, chassis and battery are all excellent. It’s cheaper than many rivals too. You’ll only want to look elsewhere if you need more processing power or an IPS display.

It’s easy enough to find a small laptop, but the Asus ZenBook S 13 OLED tries to go beyond the norm with a sensational OLED display and a lightweight design.

Beyond the eye-searing screen and svelte body, there’s plenty to like. The ZenBook deploys a factory-fresh AMD Ryzen processor and has long battery life, too. And, at a starting price of $1,299 in the US and £1,299 in the UK, the price is not outrageous either.

That sounds great, but the ZenBook S will have to perform if it wants to outpace the competition: there’s the dominant Apple MacBook Air and its updated M2 processor, and Dell’s XPS 13 and XPS 13 Plus are both impressive.

The ZenBook S 13 OLED is physically impressive. On the scales, this laptop only weighs 1.09kg, so it undercuts all of its rivals – even if the MacBook Air and standard XPS 13 are a bit slimmer.

Asus’ notebook has good build quality, too, with pleasing strength throughout the magnesium-aluminium alloy casing. Combine that with its MIL-STD 810H certification and you’ve got a laptop that’ll easily withstand daily commuter life. It looks good, too, with a matte metal chassis and a bright chrome hinge.

I’ve reviewed the Aqua Celadon model, which has a slight tinge of green, and it’s also sold in shades of blue, white and beige. In this respect, its four colour options outstrip both competitors.

The ZenBook’s right-hand edge has two USB-C ports with power delivery, and there’s another on the left. One of those powers the laptop, and Asus includes a full-size USB adapter. The AMD internals means no Thunderbolt 4 support, which you will find on the Apple and Dell laptops.

The ZenBook has a 1080p webcam without Windows Hello sign-in, but you get biometrics from the fingerprint reader in the power button.

Cleverly, Asus has made the power button shorter and more resistant than the rest of the other keys, so it’s harder to accidentally hit while typing. Elsewhere the layout is conventional, and the keyboard has a three-stage white backlight.

Asus hasn’t made any big changes on this generation of ZenBook keyboard, but that’s no bad thing – the buttons still have solid travel and an action that provides fast, consistent typing. This keyboard easily matches any rival.

The trackpad is solid, too: large, smooth and with a responsive, shallow clicking motion. It’s usable for most tasks, although you’ll want the USB-A adapter and a proper mouse for precise work.

The display has a stellar specification. It’s a 13.3in OLED display with a 16:10 aspect ratio and a resolution of 2880 x 1800. That’s more pixels than the MacBook Air and a higher resolution than the XPS 13 unless you pay for its pricey 4K option. The ZenBook’s panel is a touchscreen, and a stylus is included in the box to boot – handy for creative work.

Unsurprisingly, the Asus exhibits sensational contrast: the OLED technology means that dark areas have incredible depth, and colours pop from the panel with impressive vibrancy.

They’re huge figures and mean that this screen produces almost every shade needed by creative tasks, including those that need the Adobe RGB and HDR spaces. And while the Delta E of 3.12 could be a bit better – and you’ll need it to be more accurate if you’re a really serious creative – it’s still good enough to ensure accuracy in most workloads.

The only notable issue comes in the brightness department. While this display can reach 550 nits in HDR mode, in SDR mode it tops out at 357 nits – fine for indoor use, but not quite bright enough for consistent outdoor usage.

Still, that’s the only complaint I’ve got about a superb screen. The OLED panel provides a broad, accurate colour gamut, incredible vibrancy and a high resolution. Only the Dell XPS 13 Plus and its optional OLED display can compete.

While this display is undoubtedly bolder than the IPS panels in the Apple and the standard XPS 13, you may still want to stick with those – they provide more muted, realistic colours. For lots of work situations, that remains an advantage so it depends on your personal usage and taste.

The speakers, meanwhile, offer decent volume and reasonable mid-range clarity, but there’s a severe lack of bass so they’re only suitable for background media use.

AMD’s new Ryzen 7 6800U takes centre stage in the ZenBook S 13 OLED. It uses an updated version of the Zen 3 architecture that’s been around since 2021, and this low-power processor has eight multi-threaded cores and a solid top speed of 4.7GHz.

Alongside the processing cores, you’ll find AMD Radeon integrated graphics, 16GB of dual-channel LPDDR5 memory and a fast 512GB SSD. That’s great, and on the inside users can reach the SSD – but memory upgrades aren’t possible because the RAM is soldered to the motherboard. Connectivity comes from dual-band Wi-Fi 6E and Bluetooth 5.2, but there’s no Ethernet for wired internet as per most modern laptops.

AMD’s updated processor helps the Asus slot between its rivals. In Geekbench’s multi-core test the ZenBook returned a result of 7,714. That’s a solid score, and twice as good as the Intel Core i7-1250U that you’ll find inside the Dell XPS 13 – but it’s still around 1,000 points behind the Apple M2 processor inside the latest MacBook Air.

There’s another consideration from Dell’s line-up, too: the XPS 13 Plus. If you configure that rig with a Core i7-1260P processor, that chip will outpace the AMD Ryzen 7 6800U inside the ZenBook.

In real-world terms, there’s enough grunt here to handle multi-tasking, any office app and mainstream content creation. It’s certainly a better productivity portable than the Dell XPS 13, even if it’s a little slower than the XPS 13 Plus and the MacBook Air.

There’s some evidence that the Ryzen chip doesn’t run at its peak capacity, which is no shock from a slim laptop. The CPU rarely exceeded speeds of 2.7GHz in tough work tests, and the metal above the keyboard and on the underside became extremely warm after long-term work benchmarks.

That’s not a deal-breaking flaw, especially if you need a laptop for short bursts of activity. I’d also recommend the Balanced operating mode, which does a great job of cutting back on temperatures while only slightly reducing performance levels so you’re still left with enough ability for multi-tasking and photo-editing.

The ZenBook fights back in battery life tests. It lasted a monster 17 hours 55 minutes in our usual video playback test, which is a couple of hours beyond the Dell and Apple notebooks. If you want to use everyday work applications, you’ll still get ten hours from this rig. It’s an excellent choice if you want a laptop for all-day working – and if you’re careful with your applications and screen brightness, it’ll handle the evening too.

Note that the model reviewed here is the top spec but there’s also a lower-spec model with a Ryzen 5 chip along with 8GB of RAM and a 512GB SSD. Asus has not yet provided us with a price for this.

Check out our chart of the best laptops to see all the top options.

The Asus ZenBook S 13 OLED lives up to its name – its OLED display is stunning, with huge quality and clarity. Beyond that, this laptop is slim, light and has a great keyboard. Its battery life impresses, and it’s got the power for multi-tasking and mainstream creative work. Its price even undercuts most rivals.

That’s not to say the Apple MacBook Air M2, Dell XPS 13 and other rivals are without their charms. Apple’s machine is faster. The Dell XPS 13 is slimmer than the Asus and it has Thunderbolt, and the XPS 13 Plus is available with faster processors and OLED panels.

There’s no doubt that the ZenBook is a great competitor, though – easily able to stand alongside those other laptops. Its great screen, solid internals and lengthy battery life make this an excellent ultraportable.