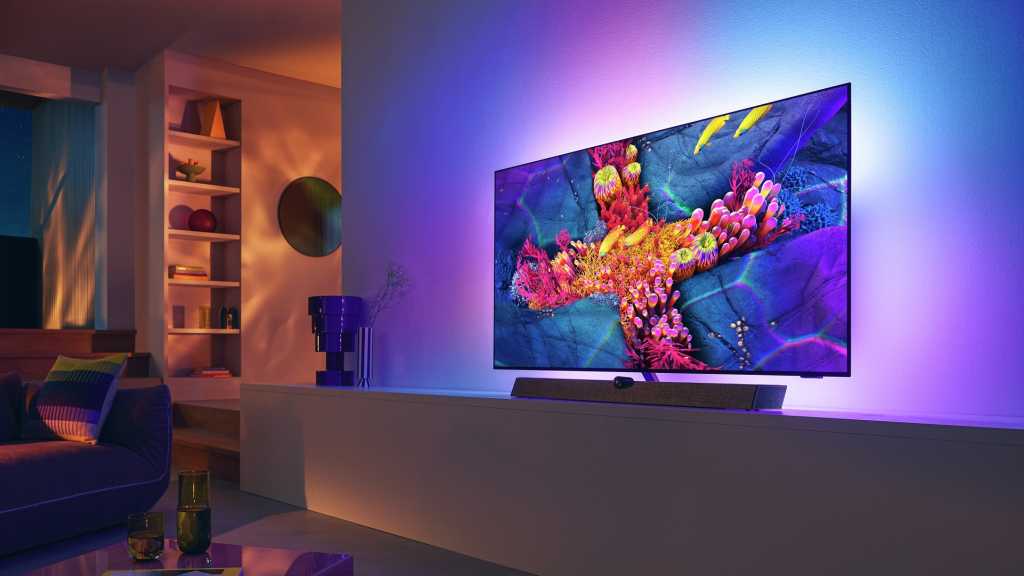 Philips has unveiled three new flagship TVs at IFA 2022 in Berlin. The OLED+907, OLED+937 and PML9507 all come with next-generation Ambilight alongside other key upgrades.

Starting with Ambilight, which although a stalwart of the TV world with its immersive lighting, hasn’t changed much for some time. However, the Ambilight Next Generation system now, much like the OLED panel of the TV itself, allows individual control of the LEDs.

Philips says this offers “a wider range of colours and a more precise match to the on-screen image.”

There’s also a new Aurora feature which combines the Ambilight LEDs with a curated gallery of images and videos which you can leave on in the background while the TV is not in use. This means it closer rivals Samsung’s Art mode on The Frame.

Around the front, the OLED+937 follows on from the excellent OLED+936 with an updated version of the P5 AI Dual Engine processor which now includes Advanced HDR to optimise tone mapping on a frame-by-frame basis.

The latest OLED EX panel has a ‘special’ heatsink which allows for a peak brightness of 1300 nits. Meanwhile, gamers can enjoy the 120Hz refresh rate along with a VRR Shadow Enhancer “designed to optimise gaming performance to the refresh rate of the panel.”

Turning to sound, the set once again has a built-in Bowers & Wilkins soundbar which now features proper left and right side-firing drivers to create a true 5.1.2 arrangement. The power has also been increased from 70- to 95W.

Its design features a narrower bezel as well as a new motion-operated backlit remote with a Muirhead leather-covered rear.

The OLED+937 has won the Home Theatre TV at the 2022 EISA Awards in its 65in format, but you can also get it in a larger 77in model. Pricing is still to be confirmed but it, along with the others, should arrive around mid-October onwards.

If you want something smaller, the OLED+907 (above) could be the perfect solution. The 2022 model comes in 48-, 55- and 65in sizes and follows the design format of the OLED+903 by integrating a Bowers & Wilkins sound system with minimal impact on the silhouette of the set.

That sound system is 3.1 in arrangement with six front-mounted drivers for a traditional left, center, and right array. There’s 80W of power when you include the rear-mounted subwoofer.

Similar to its bigger brother, the OLED+907 features the 6th-gen P5 AI processing and Ambilight Next Generation with Aurora, although only on three sides of the set.

The TV is both Freesync Premium and G-Sync compatible and offers 120Hz with VRR (variable refresh rate) at 4K. It’s worth noting that the Royal version of the OLED EX panel with integrated heatsink and peak brightness of 1300 nits is only available on the larger 55- and 65in models.

Philips has also announced a new Mini-LED television (above) for those wanting next-gen panel technology. The PML9507 “guarantees premium quality and top value” according to the firm.

Although there are no prices yet, one key element is the introduction of a smaller 55in model; a popular size for modern living rooms meaning you don’t have to squeeze (or afford) the bigger 65- or 75in models.

The 4K PML9507 comes with the same P5 processor as the new OLED+ models and boasts technology such as a 120Hz refresh rate, 1500 nit peak brightness, four-sided Ambilight Next Generation with Aurora functionality and a 2.1, 70W sound system.

Its design features a gun-metal finish and a motion-activated silver remote with a Muirhead leather finish on the rear.