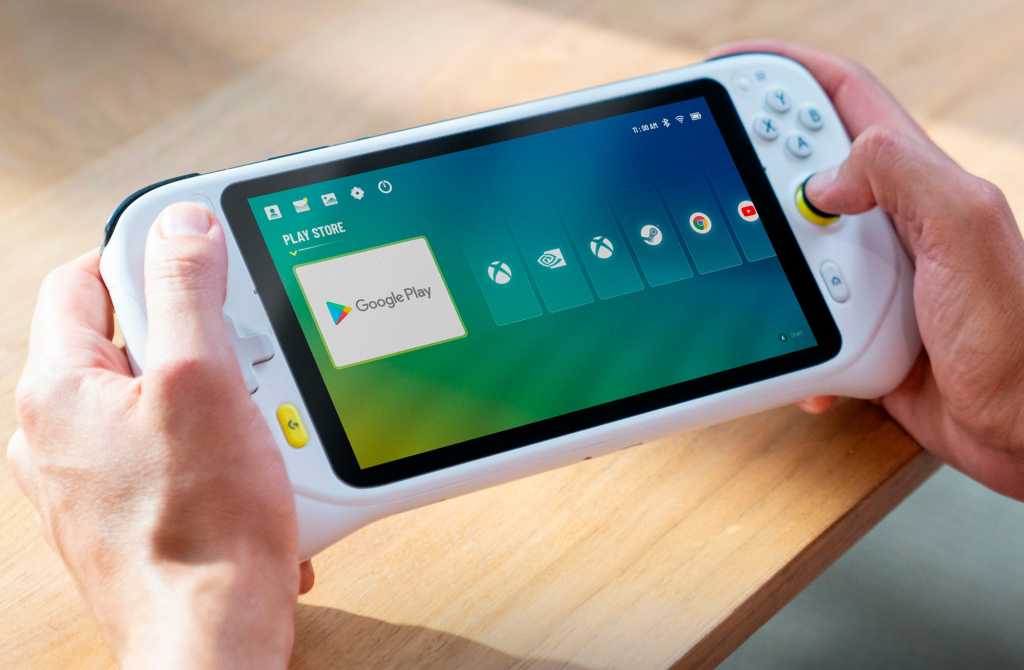 Handheld consoles are nothing new but the current crop is more powerful and capable than ever before. Now it seems Logitech wants a slice of the pie after its upcoming hardware leaked.

At the beginning of August, Logitech announced it was working on the G Gaming Handheld with Tencent Games “to advance handheld cloud gaming”. It hasn’t taken long, but images showing the device have now been seen online.

Back then, Logitech said the G Gaming Handheld (presumably not the final name) would come with support for “multiple cloud gaming services” adding that it was working with Xbox Cloud Gaming and Nvidia GeForce Now teams.

The leaked images from Evan Blass – now removed from Twitter due to copyright, suggesting they are very real – show these companies’ logos on the user interface along with Steam and Google Play icons. It is just an early leaked image though, so doesn’t totally confirm full compatibility just yet. After all, there are two Xbox logos shown.

That UI looks very similar to the Nintendo Switch, as does the device itself, along with the Valve Steam Deck. It looks like you’ll be able to scroll through a horizontal menu of cloud services and apps (Chrome and YouTube are shown) with other settings and information at the top.

What’s unclear is whether you’ll be able to install any app you like from the Google Play store, such as Netflix and BBC iPlayer for example. That would give it a one-up on its rivals for sure.

The inclusion of Google Play suggests the device runs on Android-based software. That in turn suggests it could be powered by Qualcomm’s G3x platform, a chip designed for Android handheld consoles, with an Adreno GPU for top-end mobile games. It’s only been seen so far in a Razer developer kit shown off alongside the chip itself last December.

The Razer dev kit has a 6.65in OLED Full HD+ screen with a 120Hz refresh rate, so Logitech’s hardware could well be similar. The G3x also offers 5G connectivity and the ability to game at up to 144 frames per second and in 10-bit HDR.

Well have to wait longer to find out the specs but in terms of design, it’s clear to see what it will look like. It’s unclear how big the screen is on the G Gaming Handheld but we’d assume it at least matches the 6.2in of the regular Switch.

The leaked images give us a clear look at what else the device has to offer. The front has two joysticks, ABXY buttons, a D-pad, home button, and a ‘G’ button, too. The top edge houses two shoulder buttons on either side as well as what looks like volume and power or mute buttons, plus possibly a microSD card slot.

The bottom looks like it has headphone and USB ports. It’s unclear whether the console will come in other colours than the white model shown.