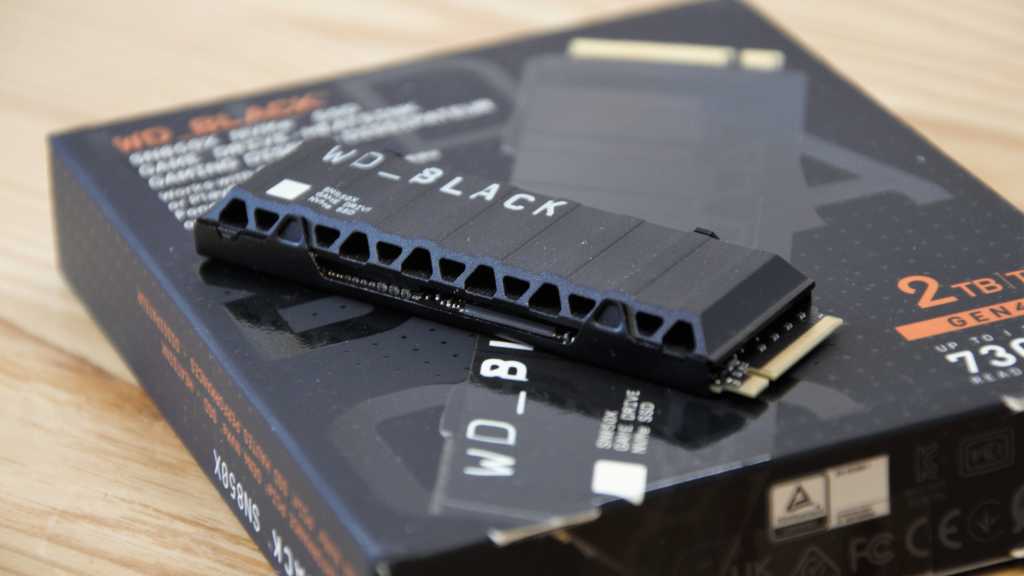 A notable performance improvement over the WD Black SN850 with the added bonus of fitting inside a PlayStation 5. WD still isn’t including hardware encryption, and the 4TB model has no heatsink option, but in other respects, this is a good upgrade.

When I reviewed the WD Black SN850 last year, I liked the headline read performance and options for a factory-fitted heatsink but was less impressed with the oddly variable price of that enhancement.

The obvious weakness of that design was sub-par write speeds and a tendency without the heatsink for the module to become warm when being worked hard.

Western Digital has endeavoured to have a second bite of this cherry with the SN850X. Does it address the issues with its predecessor and make this the perfect PCIe 4.0 NVMe drive in a PC or games console?

When the first WD Black hardware appeared, it had this visual motif of military-style boxes with metal sheets pressed out to make robust cases.

The SN850X adheres to that style with its motif ‘BLACK’ heatsink. However, it is worth noting that the cooling hardware is only an option on the 1TB and 2TB drives. On the 4TB model, the heatsink isn’t an option, disappointingly.

As heatsink designs go, the one on the SN850X is an interesting one. It isn’t just the conventional metal block with fins we’ve come to expect. Instead, holes have been cut through the sides allowing air to circulate and significantly increasing the surface area.

It sports a top layer of triangular holes, and then the heatsink isn’t uniform on its contact surface, creating other voids between the module and the heatsink. An elaborate design and testing process went into making the heatsink to make it as effective as possible, and it also provides a small recess for an RGB LED that flashes to indicate activity.

The exact colour of the flashing can be set by the WD Dashboard tool that you undoubtedly want to install if you own this drive, if only to keep its firmware concurrent.

The single-sided 2280 module and its heatsink are under 10mm thick, which is critical for those mounting the drive where there is relatively little space, like inside a Sony PS5 games console.

It’s ironic that a drive with such an industrial appearance comes in some of the best protective packaging that I’ve seen an NVMe SSD come in, but I appreciate the effort.

Unlike the Crucial P3, WD doesn’t include a spare screw for those unfortunate enough to misplace theirs during the installation process.

One of the major changes from the original SN850 is that the 500GB model has been dispensed with and a new 4TB option added instead.

These changes make perfect sense. The 500GB didn’t perform as well as the larger capacities, and the demand for larger sizes is one WD couldn’t continue to ignore.

Its removal eliminates the ‘sickly child’ from this range, as all the capacities are quoted as reaching the same 7,300MB/s read and only slightly slower 6,300MB/s write performance.

The only significant differences are reduced read IOPS at only 800K on the 1TB drive, whereas you can expect 1,200K on the 2TB and 4TB models. Write IOPS are the same 1,100K across the board.

If we compare the sequential performance of the SN850X with its predecessor, while the read speed increase of just 300MB/s seems modest, the write performance has jumped to either 6,600MB/s or 6,300MB/s from what was a maximum of 5,300MB/s on the SN850.

One strength of WD Black SSDs is that they generally have good TBW (total bytes written) values, and the SN850X is no exception. It has to match 600TB and 1200TB values for the 1TB and 2TB drives with its SN850 brothers but now includes the whopping 2400TB capability of the 4TB drive.

We’ve seen a general climb in TBW numbers in the last year, so these values aren’t exceptional, but they are huge numbers.

If you’re not editing 4K video or working with JWT data, then the idea that you’ll exhaust the TBW of the 4TB drive in a few years seems a remote possibility.

So what is special about the WD Black SN850X other than the technical tweaks that have squeezed extra performance out of this controller and NAND combination? A few things.

One is a new Game Mode 2.0 capability, a flexible software control that enables the drive to be specifically tailored for enhanced read speeds. More on this below.

As I’m using the same test rig, it’s interesting to look back at how the SN850 performed along with other PCIe 4.0 capable drives to see precisely how the WD Black SN850X compares.

All tests were performed using a 2TB capacity SN850X provided by Western Digital.

Its generally accepted that the default setting of CrystalDiskMark is overly optimistic, but using AS SSS instead revealed 6,110MB/s reads and 5,861MB/s versus 5,781MB/s reads and 4,865MB/s writes.

While write performance is only 20% faster on that test, the overall improvement is consistent, almost irrelevant to what benchmark I used.

For complete testing, I also played with the WD Dashboard that enables ‘Game Mode 2.0’ on the SN850X. The intention of this mode is to improve the load time of game titles, though the impact in most benchmarks was minimal.

If this module has a weakness, it’s one that many drives share in having mediocre 4K random write performance, but this isn’t a departure from its predecessor. Those wanting more random IOPS need to consider the Seagate Firecuda 530 or the Sabrent Rocket Plus.

Overall, the SN850X is an unequivocal improvement over the SN850, a highly respected design, and easily worth the small price premium that WD is asking.

The WD Black SN850 had a bonkers pricing scheme where the inclusion of the heatsink added more cost on larger drives for no apparent logical reason.

If you choose to buy from the more prominent online retailers, the prices generally appear in line with those direct from WD or even slightly higher. You can buy it from Amazon and BestBuy in the US and those in the UK can head to Amazon UK and Ebuyer.

Comparing this to other NVMe SSD that can be used in the PS5, the Seagate FireCuda 530 with heatsink can be found around $50 cheaper at 1TB, the ADATA XPG Gammix S70 Blade is equally inexpensive, and the PNY XLR8 SSD Gaming Kit 1TB is around $10 cheaper.

But, the drive that entirely undermines the cost of the SN850X is its predecessor, since the arrival of the SN850X, the SN850 has plummeted to under £110 for the 1TB model in the UK. And it can be found on Newegg.com for $139.99 in the USA.

If you just want more space for a PS5, the SN850 seems better value for money. But it’s likely that once the stocks of this drive in the channel decline, it might seem less of a bargain.

See our chart of the best SSDs to see all the top drives.

It’s easy to conclude that the SN850X is what the SN850 was originally envisioned, but for whatever reasons, the engineers responsible instead delivered a less ambitious device.

There are plenty of things to like here in terms of better read and write speeds, and the heatsink is invaluable if you want to enhance a Sony PS5 using this drive. However, the 4TB model doesn’t have a heatsink option, and WD doesn’t recommend using the SN850X in that console without one.

That’s a minor wrinkle in the generally well-considered specification of this design.

What do I think of Game 2.0 mode? Not much, if I’m honest. Yes, it does some temporary modifications to the cache to enhance loading times, but the impact on the write performance might make it counterproductive to those with limited VRAM.

This drive still lacks encryption, making it less appealing to those looking for high-performance workstation storage. Hopefully, WD will embrace those needs soon.

A bigger issue here is the launch price, which seems on the high side. It’s debatable if a gamer would notice the difference between this and a Seagate FireCuda 530 or WD Black SN850 if mounted in the PS5, but they would appreciate the cash that choosing one might leave in their bank account.

With crypto mining effectively devastating the PC GPU market, gamers will look for less costly options, and the SN850X might prove price sensitive. Once the launch phase is over, and the price becomes more demand-driven, it seems likely that the SN850X will adjust downwards, making it much more desirable.

That’s not to say this isn’t an excellent option for PC or PS5, but there are cheaper alternatives that offer better payback on their investment currently.