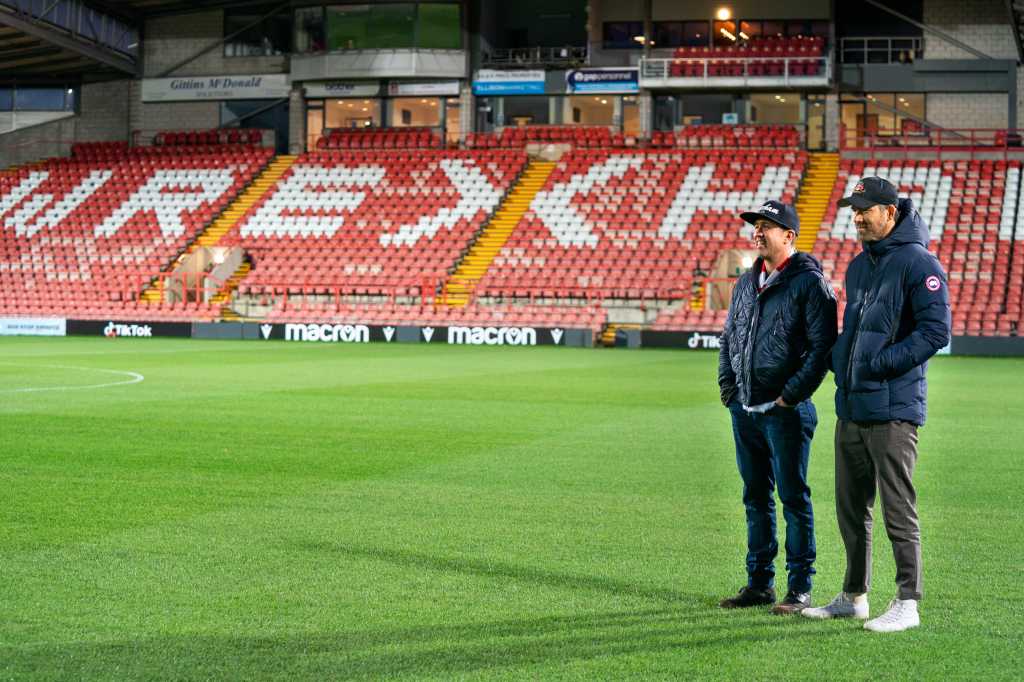 What do you get when a comedian and a superhero buy a struggling Welsh football team?

The answer, somewhat inevitably, is a multi-part documentary series for Hulu and Disney+.

The fact that Welcome to Wrexham exists at all is perhaps the biggest unanswered tension in the series, which follows Hollywood stars Rob McElhenney and Ryan Reynolds as they try to change the fortunes of Wrexham AFC – a former footballing great now languishing in the National League, the fifth (and lowest) tier of professional football in England and Wales.

Did they buy the club as a joke? As fodder for a TV show? As an extreme case of pandemic-influenced retail therapy? Or was this purchase genuine, a real attempt to work to improve the club and support the fragile community around it?

Welcome to Wrexham would certainly have you believe the latter, though with Reynolds and McElhenney heavily involved that shouldn’t come as any surprise. At times it’s easy to believe, whether thanks to It’s Always Sunny in Philadelphia co-creator McElhenney finding parallels between the post-industrial Wrexham and his own upbringing in Philly, or just glimpses of the two acknowledging that, after sinking £300,000 into repairing the pitch (twice), football clubs may not be easy investments after all.

The two actors are obviously the hook here – it’s hard to imagine a Wrexham AFC series drawing in crowds otherwise – but arguably the show’s biggest strength is that the two know better than to hog the limelight.

The five episodes provided to critics ahead of the show’s debut follow the club from shortly before the pair’s purchase in November 2020 through to the first few months of the following 2021/22 season – a period in which, thanks in large part to Covid, the pair never actually set foot in Wales.

That means they’re seen mostly in their Los Angeles homes, discussing the team’s fortunes from afar, or on Zoom calls reacting to the latest management crisis – not the most compelling material for a sports doc.

Instead, the show spends more time in Wrexham itself, profiling the players – and even more so the fans. Both are a far cry from the likes seen on Amazon’s popular All or Nothing series, which most recently followed Premier League giants Arsenal for a season.

That show follows millionaire players arriving at training in Ferraris and gliding about extravagantly fitted changing rooms and treatment areas. Down here in the National League, player salaries average £40,000, and even star signing Peter Mullin (whose supposedly outlandish wages are the matter of club gossip) lives in a pretty ordinary semi-detached.

Welcome to Wrexham flits between the club’s players, rarely returning to any after their first appearance, and they’re clearly not the focus. Neither is the football really – the show jumps between matches quickly, only dwelling on footage of occasional fixtures, and using the league table mostly to set the mood.

By contrast its fans are given star treatment, in a nod to the new owners’ repeated claim that their main goal is to do right by the people of the town.

From the local pub landlord with strong opinions about team composition, to the cancer patient whose band’s catchy song has caught on with the club, to the recent widow who attends every match with her girlfriends – nicknamed ‘the Dragons’ – Welcome to Wrexham is comfortably at its best when it focuses on what the team really means to the locals.

These aren’t glory hunters desperate for big prizes and star signings, but earnest supporters keen to see Wrexham break out of the National League, where it’s languished for years, and move up to the lofty heights of League Two (the country’s fourth league – football is weird like that).

The club is emblematic of Wrexham itself, a north Welsh town that’s seen better days, where jobs are few and there’s not much hope on the horizon.

I could question the wisdom of banking on rich Hollywood stars to come in and save the day, but that feels churlish in the face of the optimism that slowly develops in Wrexham’s fanbase as the series plays out. And besides, football club owners come a lot worse than a couple of funny guys from LA.

Can Reynolds and McElhenney really save Wrexham AFC – or Wrexham itself? If you want to check last season’s league table you can find out for yourself. But a club is about more than football, and a season is about more than results. Welcome to Wrexham is about the other stuff that keeps fans in the stands, and is all the better for it.

Welcome to Wrexham arrives on FX & Hulu in the US on 24 August, and Disney+ elsewhere on 25 August.