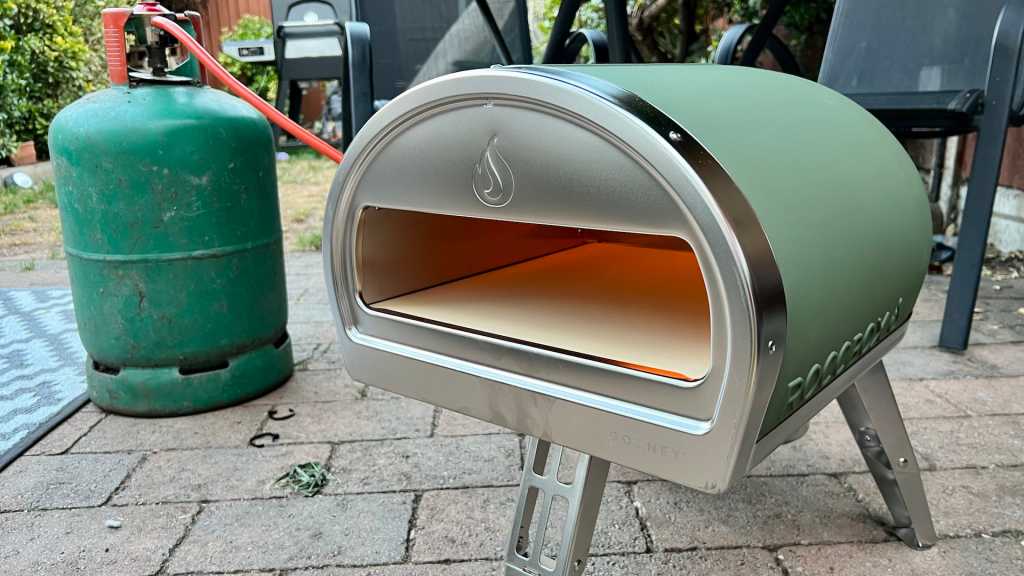 The Gozney Roccbox is a compact, portable pizza oven that’s a doddle to set up and use. The lack of a pizza door means it can take up to 30 minutes to heat up, and temps can be uneven when cooking, but as long as you rotate the pizza while in the oven you’ll still get the perfect stone-baked pizza.

While not all that popular a few years ago, outdoor pizza ovens are all the rage in 2022 – likely following a pandemic where we all started focusing more on home luxuries, let’s be honest.

Gozney is an established brand in this space, with a collection of outdoor ovens at a range of prices. The Gozney Roccbox is one of the cheaper pizza ovens in the company’s collection, but don’t mistake that for poor performance or quality.

It’s exceptionally well designed with one of the simplest setups we’ve seen, and the gas burner is much easier to use than wood alternatives. But, as with most things, it’s not the perfect option for everybody. Keep reading to find out why.

The Gozney Roccbox is a portable pizza oven that doesn’t compromise on style – and it’s not very often you can say that about a pizza oven.

There’s a thick silicone cover that clads much of the body of the Roccbox, helping keep the inside of the oven nice and hot while keeping the outside at a manageable temperature to avoid burns – though it can still get fairly warm to the touch when in use, so be careful.

The silicone cover is available two colours including a lovely shade of green, photographed here, and a dark grey, so you can find one that fits with the theme of your outdoor space.

But despite being the most portable oven in Gozney’s collection, don’t assume it’s lightweight. While lighter than much of the competition, at 20kg, you might break a sweat if you need to carry it more than a few steps. Still, the all-in-one nature of the Roccbox means it is still more portable than others for those that need an on-the-go pizza oven.

The stone within the pizza oven measures in at 315 x 340mm, allowing you to comfortably cook pizzas up to 12in – though in my experience with hand-making pizza dough, it’s tough to get one that big! There isn’t a door like the Ooni Karu 16 or Fyra 12 and that can have a knock-on effect on the cooking experience – but more on that a little later.

By default, the Roccbox uses a gas burner to heat up, although you can also opt for a combo model for an additional £100 that’ll let you use wood for a more authentic experience. We were supplied with a gas-only model, so we can’t comment on wood-fire performance.

Attached to the gas burner you’ll find a knob to control the heat level within the pizza oven, and a thermometer built into the side of the oven will provide an accurate temperature of the stone. It’s analogue, so it’s not as precise as digital alternatives, but it’s a handy gauge.

Design aside, the setup of the Roccbox is a breeze not only compared to outdoor grills that can take hours to put together, but even other pizza ovens.

Compared to the likes of the Ooni Karu 16 where you have to manually attach the door handle and other components, the Gozney Roccbox comes almost completely assembled out of the box – there’s even a handy Velcro carry strap to help you lift it out and move it into position.

I’d fully recommend keeping the strap handy too, as it’s the perfect accessory for when you do need to move the weighty pizza oven.

The only setup required is extending the foldable legs, slotting the gas burner into place on the bottom of the pizza oven and attaching the burner to a gas bottle for fuel. It really is that simple, and that further aids the Roccbox’s portable nature, allowing it to be quickly packed up and re-set up in a friend’s garden or at the park.

The question is, can it cook a pizza as well as one of its bigger, non-portable brethren?

The Gozney Roccbox can reach temperatures of up to 500°C (932°F), making it a versatile oven for more than just pizzas – though that’s what it excels at.

Igniting the Roccbox using the gas burner is as simple as pushing in the knob and turning it counterclockwise. It’s a simple way to get the ball rolling compared to a wood-fire oven, negating the need to constantly feed the fire as it heats up, allowing you to continue with your pizza-making prep while it comes up to temp in the garden.

Gozney claims that the Roccbox can reach the 350°C mark (recommended for pizza) in as little as 15 minutes when using the gas burner, though I found that even on hot evenings it’d take closer to 30 – worth keeping that in mind when it comes to prep time.

That’s likely down to the lack of a door system on the Roccbox, as much of the hot air escapes from the front hatch as it warms up. Though a pain, the bigger annoyance is that this causes an uneven cooking temp in the Roccbox, with the rear of the oven hotter than the front, and that means you’ve got to keep on top of the pizza rotation.

The good news is that the Roccbox comes with a full-size metal pizza slice in the box, making it easy to place, move and remove the pizza once it’s done. The rotation can be a little bit fiddly given the relatively narrow opening on the front, but it’s doable.

With all that being said, the Roccbox can produce exceptional stone-baked pizzas in as little as a minute. You can see the dough rise and the cheese melt within seconds of being placed inside, and there’s something truly satisfying about that.

The end result is a fresh, hand-made pizza complete with the signature leopard-spotted Neapolitan pizza look associated with stone-bake ovens.

You’re not just limited to cooking pizzas in the Roccbox either. It’s also possible to cook food like steak, buffalo chicken wings, deep-dish pizza and charred veg, with video guides on the Gozney website taking you through each step.

Clean-up is a fairly simple process as it’s largely self-cleaning – as the stone heats up, it’ll char any remnants to dust, making it easy to sweep out with a brush once the oven has fully cooled down.

Though not quite as cheap as a standard BBQ, the Gozney Roccbox comes in at a rather attractive $499/£399.

If, however, you want the full Gozney outdoor cooking experience, the company also has the $1,799/£1,199 Gozney Dome that can roast, smoke, steam or bake.

If you’re tempted, you can buy the Gozney Roccbox directly from Gozney in the US and UK, along with retailers like Amazon.

The Gozney Roccbox is a great portable oven with the easiest setup we’ve seen, and premium features like a built-in thermometer and a thick silicone outer-case to avoid burns when also make it more attractive.

However, while more lightweight than much of the competition, it still weighs 20kg, so it’s still fairly hefty to transport from one place to another. The bigger problem for many will be the lack of a door on the front of the oven, as it means temperatures are uneven when cooking – and it can take a little while to heat up too.

But, with a keen eye and regular rotation, the Roccbox can deliver a truly exceptional Neapolitan-style pizza in around a minute, with the signature leopard-spotted crust associated with stone-baked pizza.

It’s also really easy to use when hooked up to a gas burner, negating the need to add additional wood as you use the oven, though there is a multi-fuel option for those that love the wood-smoked flavour.

If you’re into cooking pizza and want to take the experience to the next level, the Roccbox is a great outdoor pizza oven that’s simple to use and easy to pack away.