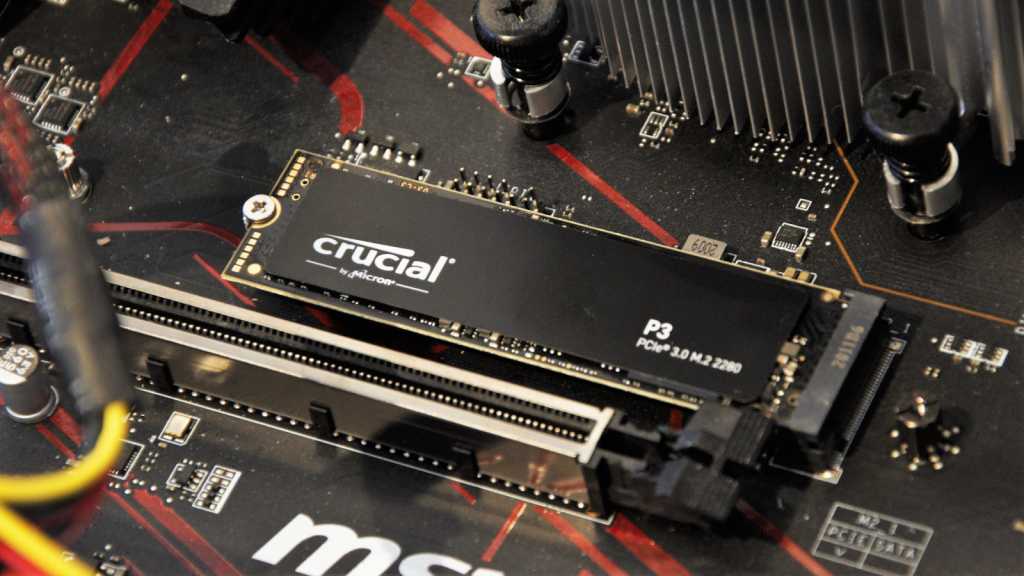 Mark Pickavance / Foundry
At a glance

There is little to be excited about with the P3 unless you are looking for an affordable P2 replacement that is 30% faster and comes in capacities up to 4TB. If you have PCIe 4.0 or intend to move to a system with it, the P3 is the cheap and sensible option.

If you’re wondering about the numbering convention of the Crucial (Micron) NVMe modules, then you’re not alone. First, Crucial released the P1, an M.2 form factor drive but SATA, not NVMe module.

Then it released the P2, a genuine but ponderously slow NVMe drive. Followed by the P5, a much faster storage device with a Plus option that supported enhanced operations using PCIe 4.0 mode.

So surely the next drive should be a P6? No, Crucial confounds our expectations with a P3.

It comes, like the P5, in a base P3 design built for PCIe 3.0 systems and an enhanced P3 Plus option that supports the greater bandwidth offered by PCIe 4.0.

Today we’ll look at the new P3, a module that replaces the slow P2 with something more agile but at a price that won’t leave system builders feeling gouged.

Those expecting something spectacular in terms of electrical engineering or heat distribution will be disappointed. It is a typical single-sided M.2 2280 board where all the chips are mounted on one surface and conveniently hidden by a label.

One oddity is that there are labels on both sides, one being upside-down to the other, and the one on the underside reveals the module was manufactured in Mexico, and the warranty is void if you remove that label. Hilariously, that label you can’t remove is not the one that covers the chips.

As with all Crucial modules recently, it comes in the most cost-effective packaging imaginable. The module is inside a plastic bubble tray along with a much-appreciated mounting screw and some minimalistic documentation. The inclusion of the screw is a simple but thoughtful action that could be critical to anyone who misplaced these evasive items.

What the P3 offers is a performance level that was at the very top of what NVMe drives offered before PCIe 4.0 arrived, a significant jump from the P2 that came before it. What you don’t get is any heat sink, LEDs or anything that makes this module seem unique. It also doesn’t offer hardware encryption, unlike the old Samsung 980 Pro.

Though, it does come in 4TB capacities for those that are working with larger data sets.

Its predecessor, the P2, used Micron 3D NAND modules and a Phison controller. The P3 uses Micron’s 176-layer NAND5, but the makers are not saying what controller is used in this or its P3 Plus brother.

This vagueness about what exactly is in a module isn’t coyness unique to Crucial, it’s something that consumer electronics companies across the globe are doing, but it doesn’t help potential customers to make strategic choices about the parts they want.

The quoted performance of the P3 is 3,500MB/s reads, and 3,000MB/s writes, putting it right up there with the likes of Samsung and Kingston.

But those performance levels aren’t on all capacities, with the 500GB option only offering sequential writing at 1,900MB/s. For this reason, I’d probably suggest staying away from the smallest model even if it’s the cheapest.

For the other capacities, these speeds were groundbreaking only a few years ago, although the arrival of PCIe 4.0 drives with read rates of up to 7,000MB/s has made them seem marginally less impressive.

For those with PCI 3.0 systems, the P3 is about as quick as this interface allows drives to go, and it’s worth noting that since it appeared, the P5 has disappeared from the Crucial range. This hints that it replaces not only the previous P2 but also the P5.

I tested the 1TB P3 and 1TB P3 Plus on a Ryzen PCIe 4.0 empowered test rig and found that the provided samples performed as predicted by Crucial, if not marginally better.

Using the default CrystalDiskMark 8.0.4 test delivered read speeds of 3,677MB/s and writes of 3,230MB/s. Other synthetic tests, like AS SSD and AJA, supported this balance, admittedly with slightly less optimistic numbers.

The ATTO test revealed much the same performance, but also the architecture of this drive allows it to reach full potential performance at a smaller I/O size.

Where most NVMe drives don’t get into their stride until transfer sizes of 256K, 512K or even 1MB in the case of the P2, this drive is at full speed at just 64K. Making it a good choice for those with lots of smaller files.

As with many NVMe designs today, the caching appears to be SLC-based, enabling decent performance for large writes up to the point that the SLC ratio of 1 to 3 exhaust available storage. What’s lacking here is hardware encryption or any quoted power demands.

The lack of encryption isn’t a massive issue for most customers, but not having any information about power draw isn’t helpful for laptop users that run on battery.

As the P3 doesn’t have any heat sink and instead relies on thermal chip management, it might throttle in the confines of a laptop installation.

The quoted TBW (total bytes written) are on the low side when compared to the P5. The 1TB P5 had a TBW of 600TB, whereas the P3 only offers 220TB. Unless you brutalise your NVMe storage, this might not be an issue, but clearly, some changes to the layout have enhanced performance by sacrificing resilience.

Online retailers are offering marginally better deals, with the 1TB model selling for $83.99 through Newegg and BestBuy. You can also buy it in the US from Amazon.

In the UK, it’s available from Amazon, Ebuyer, Scan and Box.

It’s interesting to note that this is a little more expensive than the P5 launched, but only by a tiny amount. What’s also different is that the differential between capacities is shrinking, with the cost per GB being somewhere between 10 and 9 cents (or pence) irrespective of what size you choose.

Therefore, you’re not penalised for choosing the biggest capacity, as you likely would have been in the past.

If we compare the P3 to the P3 Plus, the cost difference is between 10 and 14%, which seems very reasonable considering the P3 Plus is more than 40% faster.

Looking at the competitor market for PCIe 3.0 drives, the Samsung 980 1TB costs £83 in the UK but over $100 in the USA. For those wanting very cheap drives, the WD Green SN350 are below $75, undercutting the P3 very slightly. But the SN350 doesn’t perform as well as the P3 in many ways.

Less well-known brands can also be found that offer sub-$70 1TB options for those willing to go that route.

In short, the P3 is very competitively priced, especially from online retailers. However, with many offering the P3 Plus for only $10 more at some capacities, Crucial might be competing with themselves to a degree.

See our chart of the best SSDs to see all the top drives.

Crucial’s advantage over other brands is that it makes its own NAND modules through Micron, reducing overall costs.

NAND as a commodity has been in freefall recently, and news that SK Hynix has a new 238-layer 512Gb TLC 4D NAND that will be ready for production in 2023 isn’t the news that Micron wanted to hear. It would be reasonable to assume that Micron has parallel plans, but at this time, these aren’t being made public.

Ignoring those storm clouds on the horizon, Crucial is confident that most customers don’t need the raw speeds or capacities these developments represent. They want affordable product lines like the P3 and P3 Plus that are drop-in replacements for current or even older systems.

It’s disappointing that Crucial feels it is necessary to provide such limited specifications with this product, so it can change this whenever it chooses, but this appears to be the operating mode for many consumer electronics manufacturers now.

At the point of reviewing, those aiming to move to a PCIe 4.0 system soon should look at the P3 Plus, as it will run faster on that platform but also work on an existing PCIe 3.0 machine now.

But for those that want a quick and relatively cheap drive for a PCIe 3.0 system, maybe a laptop, the P3 has a few good things to offer.

Once you get over the slightly confusing aspect that the P3 replaces not only the P2, but also the P5, then the logic of this product falls more neatly into place.

The only issues unaddressed here are that if you tend to cannibalise parts, the P3 Plus is undoubtedly worth the extra cost over the P3. And for those looking for better than 4TB, it’s obvious that 8TB, 16TB or larger capacity drives from other brands are probably coming next year.