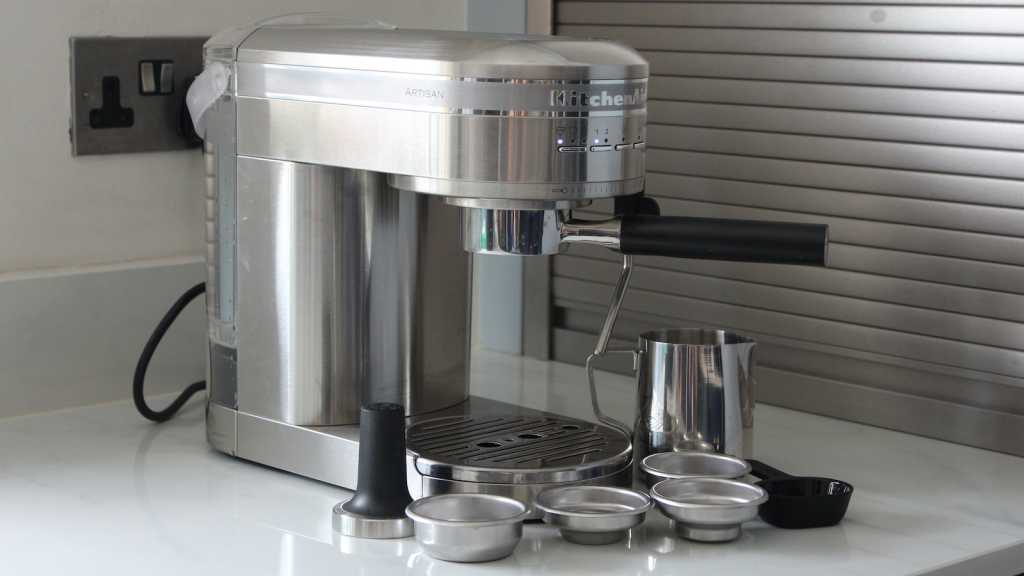 KitchenAid’s Artisan Espresso Machine is one for the devoted coffee drinkers. Designed to provide the experience of crafting your own drink without the disappointment of a less-than-flavourful brew, it puts café-style lattes, mochas and Americanos at your fingertips. As a hands-on machine it excels, but you’ll need to set aside time and a little attention for your morning brew.

Manual espresso machines can be tricky to use, especially if you’re a beginner. Put simply – it’s easy to spend a lot of time tamping and still end up with a lacklustre latte. However, the Artisan Espresso Machine makes the process almost foolproof.

By using sensors to monitor and control water temperature as your coffee brews, double-walled baskets for consistency (or single for when you’re more confident), and a low-pressure pre-infusion followed by pressure from a 15-bar Italian pump, it produces faultlessly authentic espresso, time after time.

Essentially, there’s just enough automation to ensure that your espresso is consistently good, but not so much that your coffee creativity is compromised.

The Artisan Espresso Machine follows the style of other appliances in the Artisan range, with distinctive branding, sleek lines, and a coordinating palette of four colours for its metal body (which weighs more than 5kg). A 1.4-litre water tank to the rear increases its footprint: while it’s not too tall at 28.6cm, it’s 41cm deep, meaning you may need to rotate it 90 degrees to sit at the back of a worktop if you’re short on space.

At one side is a steam wand that can be turned towards the drip tray, so it can be used to dispense hot water, or swivelled away from the machine, making it easier to warm and froth milk.

The portafilter itself is beautifully designed. It’s heavier than most you’ll find and has a flat base, rather than protruding spouts that make most portafilters rock from side to side on the worktop as the coffee is tamped into a puck.

Instead, the Artisan’s portafilter spouts are recessed, so tamping the grounds into a uniform, level shape is easier. It twists easily into the machine, with a guide to show at which point it’s properly locked in.

A stainless-steel milk jug, solid metal tamper and coffee scoop are included, as are two single and two double wall baskets: the former is designed to create full-bodied shots of espresso while the latter is better for beginners. While the baskets are labelled as to whether they’re for a single or double espresso shot, it can be easy to confuse which are single and double walled, especially first thing in the morning.

We found the Artisan Espresso Machine fairly intuitive to use thanks to a set of slim buttons with LEDs across the front that switch between its functions. Once the portafilter has been twisted into place and espresso selected, all you need to do is choose one shot or two, start, and the machine does the rest.

One issue we found with this is that while the distance between the portafilter and mugs was issue-free, brewing into espresso cups caused splashes. This is because the drip tray has only one position, rather than a choice of two or three like some coffee machines do.

However, the espresso it made was very good: smooth, aromatic and, perhaps most importantly, consistently so. The crema was less consistent: a double shot brewed into a mug featured a thick layer, while a single shot into an espresso cup had only a slight ring of crema around the edge. Subsequent espresso shots retained their crema layer so it can be hit and miss.

Emptying the portafilter was largely mess-free – as the coffee could be tamped in firmly, the grounds came out in one lump, so you won’t have to scoop out sloppy pucks.

Frothing milk is similarly semi-automated. You’ll still have to hold the jug and choose the motion and duration to create warm foamy milk but the machine creates steam with a single button push.

It’s time-consuming compared to an automatic milk frother but surprisingly easy even if you haven’t used a steam wand before. We also liked that you can dispense hot water directly after to keep the wand clean.

In the US, the Artisan Espresso Machine is available for $449, from Walmart and Amazon, although you may have to shop around to get the colour you want. At the time of writing, it’s not in stock at KitchenAid.

While there’s no getting away from the fact that the KitchenAid Artisan Espresso Machine is an investment appliance – given that it’s possible to buy an espresso maker for around $100/ £100 – its semi-automation and raft of features make it an appealing buy.

Beginners will appreciate its fuss-free buttons and flat portafilter, and those who are more experienced can toggle espresso volume, water volume and water temperature, as well as steam milk exactly the way they like it.

Overall, there’s a lot to recommend the Artisan Espresso Machine beyond its sleek looks. Whether you enjoy an espresso or latte made just so, or are keen to expand your coffee horizons beyond those offered by a pod machine or a fully automated bean-to-cup, this traditional maker uses plenty of tech to deliver just that.