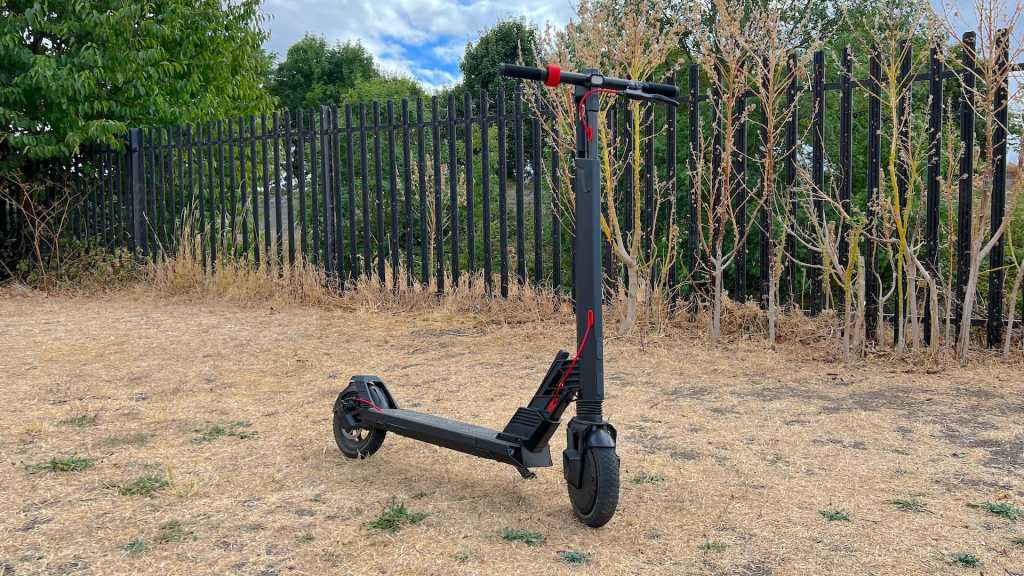 The Turboant V8 sports a unique dual-battery design, allowing not only for a boosted 50-mile range that beats most of the competition, but with simultaneous charging, it goes from flat to full in 4 hours. Throw in a 450W motor capable of speeds of up to 20mph, solid build quality and a simple folding system and you’ve got a strong all-rounder – even if it is a bit on the heavy side.

The Turboant V8 is the latest top-end scooter from the micromobility manufacturer, boasting top-end specs like a 450W motor and top speeds of 20mph alongside unique features like a dual-battery design that provides an impressive 50-mile range and slashes charging time in half.

It’s a huge improvement over the Turboant X7 Pro without the associated price hike, meaning it’s more affordable than you might think.

Is it enough to compete with the likes of the similarly priced Xiaomi Mi Pro 2 scooter? You might be surprised.

The Turboant V8 is a combination of form and function, with an industrial, angular look that flies in the face of the likes of the rounded Reid E4.

That’s not to say it’s not a good-looking scooter though, with a clean design largely devoid of brake cables that plague the stems of much of the competition. Where there are visible cables, the bright red colouring makes them pop against an almost entirely black body for added style.

The deck is fairly long and wide, measuring in at 500 x 175mm, and the grippy patterned texture helps you stay on the scooter even in wet conditions. With official IP54 water resistance, it’s able to survive a stint in the rain – though I’d avoid deep puddles if I were you.

The Turboant V8 has one of the simplest folding mechanisms around, with a single large latch at the bottom of the stem. When it’s time to fold, simply pull the lever away from the stem and towards the deck and the entire front stem will fold with it. It literally takes less than 3 seconds, locking into place on the board ready to be carried.

It’s compact enough to put into the boot of a car when folded, measuring in at 1160 x 505 x 460mm, though at a not-insignificant 21.6kg, it’s not the easiest to carry onto public transport. If you’re on the lookout for a lightweight scooter, the Mycle Cruiser Pro is a solid alternative.

But why is the V8 so heavy? Sure, it’s fairly bulky, but it’s much smaller than the likes of the 28kg Inokim Ox Super.

There are huge benefits to the range and charge time, which I’ll detail a little later, but the knock-on effect is that it’s much heavier than most of the competition.

The Turboant V8’s display is another feature of note, embedded centrally on the handlebars for a clean finish. It displays the standard information you’d expect, like speed, battery life and light status, but it goes a step further with rev-counter-like graphics.

As you apply the throttle to speed up and the brake to slow down, the pressure exerted on each control will be displayed in real-time, giving you a unique insight into how you’re controlling the scooter. It’s a nice touch that brings it closer to a car dashboard than a scooter and helps separate it from most of the competition.

Display aside, the 505mm-long handlebars sport firm grips on either end, along with a single brake control mounted on the left and a throttle on the right. Within the throttle, you’ll find a power button that doubles up as a control to change riding modes and turn on headlights – another nice change compared to competitors.

While most feature a power button embedded on or near the display, the throttle-based button of the V8 means it’s easy to adjust gear mid-ride without removing a hand from the handlebar – a huge plus for rider safety.

The 3W light, mounted at the top-most part of the stem, is more than bright enough to illuminate the ground immediately in front of you in dark conditions. That’s flanked by four ambient lights placed around the deck that provide additional lighting when riding at night, and a bright LED taillight means you’re clearly visible on dark roads.

The only area where the Turboant V8 is lacking is in the app department; without a companion app for iOS and Android, the V8 lacks smart features like remote locking, journey overviews and the ability to tweak settings on the fly – all features found on cheaper scooters like the Ninebot Kickscooter D38E.

At the heart of the Turboant V8, you’ll find an upgraded 450W motor, 100W more than the company’s own X7 Pro and competing scooters from Xiaomi – and as you might expect, that translates to a rather nippy riding experience.

In fact, with a top speed of 20mph (32km/h) it’s one of the fastest scooters we’ve seen at Tech Advisor – beaten only by the 28mph Inokim Ox Super – though with that comes complications about legality in the UK. Electric bikes are limited to 15.5mph, and it’s likely that it’ll match that if (or hopefully, when) scooters are legalised on UK roads.

It’s also worth noting that, unlike Inokim’s scooter, you can’t add a speed limiter yourself.

Still, if you’re not based in the UK or you plan on riding the scooter on private land, it’s a fantastic experience.

The 450W motor gets to work quickly, with great acceleration and faster top speeds than most of the competition that allows you to get from A to B incredibly quickly. It’ll even take you up hilly 15-degree inclines, though at a slightly slower speed than usual.

As with most scooters, there are three riding modes to choose from – Eco, Comfort and Sport.

Eco mode is the most battery-efficient way to get around, but it comes at the expense of acceleration and top speed, limited to just 6mph. The Comfort mode takes things up to 9mph, while the Sport mode throws everything into high gear with the top 20mph speed and rapid acceleration – though at a cost to overall range, as you might expect.

Features like automatic cruise control make longer journeys more comfortable, negating the need to constantly hold the throttle, and the combination of air-filled 9.3in tyres and a rear suspension system should negate bumps and cracks in the road – in theory, anyway.

In practice, the Turboant V8 is still rather bumpy when riding on anything but a perfectly tarmacked surface – likely down to the lack of matching suspension in the front wheel, which the stem connects to. It takes the edge off compared to scooters with no suspension at all, but it’s not quite as smooth as it could be.

The good news is that, even at such high speeds, the dual braking system (a combination of a disc brake and an electronic brake) brings the scooter to a stop very quickly.

The powerful motor also allows the scooter to accommodate for heftier riders, with a maximum weight limit of 125kg.

As mentioned earlier, the Turboant V8 is one of very few scooters to sport a dual battery design, with not one but two 36V 7.5Ah batteries found within the scooter’s stem and deck.

The combined 15Ah (720Wh) capacity of the V8 means it can offer up to 50 miles (80km) of range from a single charge – almost double the range of similarly priced scooters like the Xiaomi Mi Scooter Pro 2.

Of course, it goes without saying that the true range will be affected by factors like rider weight, speed and acceleration, road inclines and even the weather, but it certainly alleviates battery anxiety as you explore.

While the battery within the deck can’t be removed, the one in the stem can, and that means you can charge both batteries simultaneously, going from flat to full in just four hours – a big difference from the usual 7-9 hours from long-range scooters.

The scooter comes with two identical chargers in the box, and a dock for the removable battery to sit in while charging. You do, of course, have the option of charging both batteries within the scooter itself, but it’ll essentially double the charge time.

With premium features like a 450W motor and 50-mile range, it shouldn’t come as a surprise that the Turboant V8 isn’t an entry-level scooter – though it’s priced much more affordably than you might expect.

The Turboant V8 is available for $649/£540, bringing it in line with the likes of Xiaomi’s Mi Scooter 2 Pro while besting it in most areas. It’s only available directly from Turboant and comes with a 12-month warranty – though you’ll have to ship it back to Turboant yourself to make a claim.

To see how it compares to the competition, take a look at our pick of the best electric scooters.

The Turboant V8 is an impressive scooter that’s ideal for getting around cities. The 450W motor is more powerful than the competition, providing top speeds of 20mph and rapid acceleration that make getting from A to B quick and simple, though it’s still relatively bumpy despite a rear suspension system.

The real standout feature of the V8, however, is its dual-battery design. It sports two 36V 7.5Ah batteries – one built-in, one removable – that combine to provide up to 50 miles of range per charge, alleviating battery anxiety on longer rides. You can even charge them in tandem thanks to a second battery dock, bringing charge time down to just 4 hours.

Throw in nice little extras like brake and throttle gauges on the display, a multi-function button built into the throttle and one of the easiest folding systems we’ve seen and you’ve got a capable scooter at a rather affordable price.