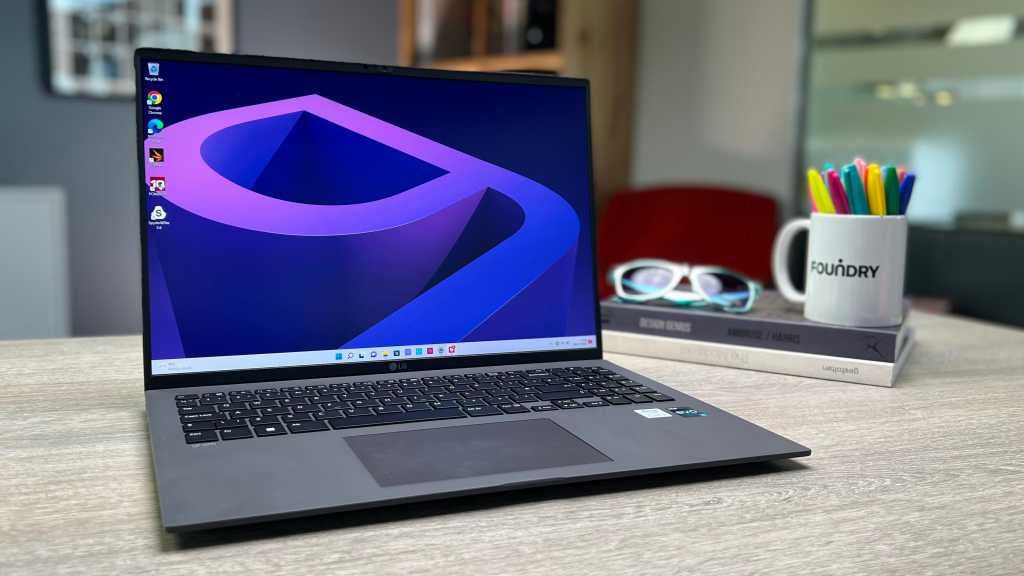 The LG Gram 16 is a stunningly thin and lightweight laptop that’s a joy to carry in a rucksack. It doesn’t compromise on durability, display quality or battery life – though you’ll certainly find more powerful laptops on the market at a similar price if performance is what you’re after.

While working a 9-to-5 in the same office every day was the norm a few years ago, there has been an explosion in remote and hybrid working – and that means people are working on the go more than ever before.

As the name suggests, the LG Gram 16 is a lightweight bit of kit that’ll surprise you as you effortlessly lift it with one hand. It weighs in at an impressive 1.2kg, while the smaller LG Gram 14 weighs in at 999g – less than 1kg.

Combined with relatively compact dimensions (355 x 242 x 16.8mm) for a 16in laptop, the Gram 16 is easily one of the best laptops around for portability, with noticeably less heft when carried in a rucksack compared to my MacBook Pro (2021) – though it isn’t any thinner or lighter than last year’s near-identical model.

That lightweight form factor is achieved by using a combination of magnesium and plastic within its chassis and lid – but that also means it’s less rigid than metallic alternatives, and it doesn’t feel quite as premium either.

However, the MIL-STD 810G rating helps alleviate any potential fears about it being less durable than the competition, able to withstand shock, extreme temperature, dust and more.

There’s even a small LED next to one of the TB4 ports to indicate charge when plugged in – a nice small touch.

Believe it or not, you’ve also got the option to upgrade the Gram 16 yourself. There’s a second empty M.2 2280 SSD slot hidden within the chassis allowing you to add extra storage, though the process of accessing it is a little fiddly. A more user-friendly approach would’ve been nice, it has to be said.

In terms of colour options, the LG Gram 16 comes in the same black and grey finishes as last year’s variant, with the latter supplied for review.

The full-size keyboard is great for word processing (something I can attest to!), with a firm, crisp response and just the right amount of travel that’s surprisingly satisfying to type on.

There’s a two-stage backlight beneath the keyboard that’ll keep it illuminated in dark conditions, media keys built into the function keys and a full Numpad to the right, with the latter a particular boon for anyone that works with numbers.

Beneath the keyboard sits the large 132 x 83mm trackpad. While trackpads are notoriously hard to get just right, the Gram 16 excels with a responsive surface and firm click feedback that makes swiping the mouse around an absolute joy. You won’t be ditching your mouse anytime soon, but you won’t have any complaints about the trackpad when using the laptop on the go.

While laptops usually feature bog-standard low-res 720p cameras, LG is one of a growing number of manufacturers to realise the importance of a high-quality camera in times of remote and hybrid working.

The 720p webcam of last year’s model has been upgraded to 1080p, which is not only more detailed but brighter with impressive low-light performance, ideal for those that spend a lot of time on video calls.

With a fancy new webcam in place, LG has decided to utilise it – along with its upgraded AI smarts – to introduce a bunch of webcam-based features unique to the Gram 16.

That includes features like blurring the display when you’re away from your laptop, moving the mouse between displays with a glance when using multiple displays, and a particular favourite of mine, an alert when someone is looking at your screen from over your shoulder. No more peeping Toms on public transport and flights!

The upgraded webcam is also Windows Hello compatible, allowing you to scan your face to get access to the laptop, but in doing so LG has removed the fingerprint scanner from the power button. That’s a little disappointing, considering the Windows Hello scanner requires your face to be in just the right position for it to successfully scan.

The LG Gram 16’s display is stunning, with slim bezels on two of the four edges that allow the screen to stretch to almost the very edges of the casing for a premium look, and the taller 16:10 aspect ratio is great for split-screen use, reading and number-crunching.

It’s technically a great display too, with the 2560 x 1600 LCD panel delivering great coverage from the three major colour spaces – 100% sRGB, 89% AdobeRGB and 100% DCI-P3 in testing – and a maximum brightness of 372cd/m2. Combined with a matte finish to deter reflections, I had no issue using the laptop indoors or outdoors.

Generally speaking, the display is phenomenal, with plenty of detail, vibrant colours and great contrast, making it ideal for both working on spreadsheets and catching up on a bit of Netflix in the evening – although the taller display means letterboxing is more of an issue than traditional 16:9 panels.

The only pain point is the standard 60Hz refresh rate, though with a minimal response time, it still feels smooth and responsive in use.

For those that need more screen real estate, LG has revealed the +View external display, designed for use with the Gram 16. The lightweight (670g) monitor can sit horizontally or vertically thanks to an iPad-esque folio cover, and connects to the laptop via USB-C.

Unlike most alternatives, the panel used in the external display is of high quality, matching the resolution, size and colour profile of the Gram 16 for a consistent experience across both displays. It’s sold separately, and it’ll set you back $349/£299, but it’s a solid choice for an external display.

There aren’t visible speaker grilles that sit on each side of the keyboard like some alternatives, but the two hidden 1.5W speakers – complete with DTS:X Ultra certification – deliver a surprisingly rounded audio experience.

It’s more than enough for watching YouTube videos or even catching up on Netflix shows, with a relatively balanced output and notable bass to round it off.

For those that haven’t heard of the i7-1260P, it’s a 28W Alder Lake-generation CPU designed to be used in ultralight laptops – and if the Gram 16 isn’t ultralight, I don’t know what is!

The CPU sports 12 cores – four dedicated to performance and eight for low-power tasks – which sounds great, but it’s less powerful with two fewer cores than the standard i7-12700H used in high-end alternatives, and that has a knock-on effect on performance as shown in our benchmarks.

As seen above, the LG Gram 16’s ultralight CPU can’t quite compete with similarly specced laptops like the Huawei MateBook 16s (2022) equipped with the standard i7-12700H, both in terms of compute and graphical performance. In fact, results are more in-line with the $899/£949 Samsung Galaxy Book 2 360 and its i5-1235U and 8GB of RAM.

Those are just numbers though; in real-world performance, the Gram 16 is fast and responsive. It boots up from cold within seconds, with apps like Chrome, Slack and Microsoft Word opening near-instantly, and it can run plenty of apps on-screen at the same time. There’s a reason it’s Intel Evo-certified, after all.

However, it begins to struggle when it comes to processing-heavy tasks like video editing and gaming, with the surprisingly audible fans kicking in fairly quickly. You can opt for a model with an external RTX 2060 GPU in some regions, but that kind of defeats the purpose of an ultralight laptop.

There is a reason for the trade-off in sheer performance though; battery life.

Considering just how lightweight and thin the LG Gram 16 is, you’d expect battery life to be relatively poor – how could LG fit a big battery into a case so small, after all? Well, it seems the eight power-efficient cores of the i7-1260P are doing the job, because the Gram 16 is an impressive beast when it comes to battery life.

Though it’s behind Apple’s M1-enabled MacBook Air at 19:55, it’s rare to come across the battery life to size ratio that the Gram 16 offers, offering a perfect blend of portability and all-day performance.

That’s with the caveat that more power-hungry applications will drain the battery a little faster, of course, but I’ve found the battery would comfortably last a whole day of work – browsing, writing and light photo editing – without needing a top-up.

When it comes to charging, USB-C power delivery means the included 65W USB-C PD charger provided 33% charge in 30 minutes in testing, while a full charge can take around an hour and 45 minutes.

While last year’s LG Gram 16 came running Windows 10, this year’s model sports the upgraded Windows 11 Home and all the benefits that come with it, including a refreshed user interface, the ability to run Android apps and much more.

There are a few LG-branded apps pre-installed, but these have been redesigned, consolidated and cleaned up for a more user-friendly experience than previous iterations, making it easier to install software updates and make the most of LG’s webcam smarts.

That’s no doubt expensive, especially when you consider the Huawei MateBook 16s starts at £1,299 (around $1,550) and comes not only with a higher resolution display, but better performance – though it weighs double the LG Gram 16. Apparently, a lightweight design comes with a hefty premium.

If you’re tempted, you can buy the LG Gram 16 (2022) in its various configurations from Amazon in the US and Amazon and AO in the UK. For more laptop inspiration, take a look at our selection of the best laptops available right now.

The LG Gram 16 (2022) is a marvel of engineering, with a lightweight chassis that doesn’t compromise on durability all all-day battery life too – though the long battery life comes at the sacrifice of a less powerful CPU than similarly priced alternatives.

Performance aside, the LG Gram 16 feels like a premium bit of kit, with a responsive keyboard, large trackpad, great speakers and a high-quality display – even if the latter is capped at 60Hz.

If portability is key, you won’t find anything as lightweight with as large a display as the Gram 16, but there are certainly more powerful laptops on the market at a similar price if performance is your main goal.