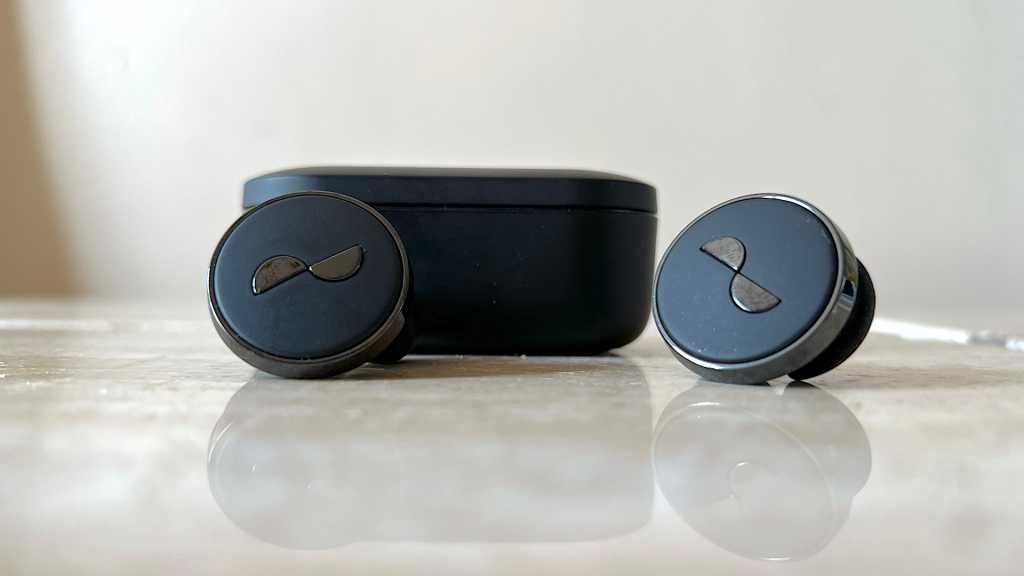 The NuraTrue Pro wireless earbuds are an impressive bit of kit, not only offering Nura’s signature personalised sound output but, for the first time, CD-quality lossless audio over Bluetooth – though only with phones running Qualcomm’s Snapdragon 8+ Gen 1. Even without lossless, there’s a lot to love, with spatial audio support, a premium fit, great battery life and adaptive ANC to boot – they’re just on the expensive side.

Nura has a reputation in the audio industry for offering impressive personalised audio that truly enhances music playback – but while it’s impressive, it hasn’t been truly high quality, lacking the ability to support lossless audio via Bluetooth. That is, until now.

It’s a genuinely exciting step forward for the industry as a whole, but there’s a catch.

The NuraTrue Pro sports a design almost identical to that of the standard NuraTrue buds, but that’s no bad thing.

The iconic circular earbuds look premium, sporting an all-black design that provides an understated yet elegant look. That’s further enhanced by the introduction of ceramic with the Pro model, found on the outer rim of each bud and the Nura branding on the case lid too.

It’s a small change to an otherwise identical design, but one that makes the buds feel more premium – especially as you tend to grip the circular buds by the ceramic outer rim.

As with its predecessor, the Nura logo on each bud doubles up as a capacitive touch control that allows quick access to a range of features like disabling social mode and pausing music.

There are quite a few functions available, with single, double, triple-tap and tap-and-hold shortcuts on both buds. That’s up to eight functions, beating most rivals, and they’re well implemented, with no accidental activations or mis-taps during my time with the buds.

Though the circular design of the buds may not look ideal for fit and comfort, the combination of swappable eartips and earfins – along with a seal test in the Nura app – provides a great fit with no real need to readjust the buds during longer listening sessions.

There are several sets of eartips and fins in the box too, meaning it shouldn’t be hard to find a combination that works for you.

When not in use, the NuraTrue buds live in the accompanying all-black charging case. The buds magnetically snap into place to provide a secure charge, and small (usually hidden) LEDs on the front glow green and red to indicate the battery life of the buds and the case itself.

The case is taller and wider than rivals like the AirPods Pro, but that’s mainly down to the design of the buds stored within.

The NuraTrue Pro offer the standard smart features we’ve come to expect from high-end wireless buds, including automatic play/pause technology and a transparency mode, but there’s plenty more to them than that.

Premium features include the ability to connect to two sources at once for easy hand-off between the two, with the option to pause music on the first source before switching to the second to avoid playback issues.

There are also more microphones on each bud this time around, not only improving the ANC capabilities – more on that in a bit – but also vastly enhancing the mic quality in calls.

While those on the phone would complain about muffled, unclear sound when using the standard NuraTrue buds, there were far fewer complaints when using the NuraTrue Pro. That’s not to say they perform as well as the likes of the AirPods, but there’s certainly an improvement.

There are also new features available via the Nura companion app for iOS and Android, introducing a custom EQ for the first time. It’s not quite as user friendly as some rivals, with no presets, but it’s a nice touch for audiophiles that want to tweak the output to suit their tastes with five frequency bands.

That’s a total of 32 hours, which could be further extended if you were to disable features like spatial audio and ANC. Though with those features being highlights of the Pro model, it’s likely you won’t.

Qi-enabled wireless charging is a new addition to the NuraTrue Pro, providing a more convenient charging experience than a wired USB-C connection. However, if you do opt for wired charging, faster charging speeds mean it’ll go from flat to full in around an hour – half the time of the standard NuraTrue buds.

That’s all fairly impressive, but it’s in the audio department that the NuraTrue Pro really shines.

When it comes to Nura products, personalised audio is the headline feature, tailoring the output to your ears to enhance overall performance.

When you first set up the NuraTrue Pro buds on the Nura app, you’ll go through a quick test to determine the frequency response suited to your ears, and the buds will then adjust the output to match it. There’s a handy demo during setup that showcases just how much of an improvement there is, along with the option to increase the immersion.

It’s an impressive feature that makes Nura products shine among the competition, providing added detail in long-time favourite tracks, with rich, full, detailed sound and plenty of bass too. You’ve also got the EQ available in-app if it’s not quite to your taste, as mentioned earlier, but I never felt the need to.

While that’s impressive, the NuraTrue Pro take things a step further with support for lossless CD quality audio over Bluetooth – a first for wireless earbuds.

Nura worked with Qualcomm to integrate its QCC5171 BT audio SoC chipset into the buds, which allows you to stream 16-bit/44.1kHz at an impressive 1.2Mbps via Qualcomm’s new aptX Lossless codec without any connected cables. Nura brands it as CD quality, but it technically just falls shy of true 1.4Mpbs CD Quality – though it’s still much closer than you’ll get from any rival, knocking Sony’s 990kbps LDAC codec from the top-spot.

You’ll still need access to high-res audio on your smartphone, available from the likes of Apple Music, Tidal and Amazon Music, but it’s a huge deal for audiophiles.

However, there’s a catch to the lossless audio support; there aren’t any phones on the market right now that support it.

Nura says that you’ll need a smartphone with a top-end (and not yet readily available) Snapdragon 8+ Gen 1 chipset and Bluetooth 5.3 to make use of lossless audio. Given the NuraTrue Pro’s slated October 2022 release, this shouldn’t be as much of an issue at launch, but you’ll still need one of the latest Android smartphones to appreciate truly lossless audio.

It’s also bad news for iPhone users, with no support for lossless playback now or in the future due to a lack of compatibility with Qualcomm’s aptX Lossless audio codec. There will be a USB dongle available at launch to allow for high-res playback from a PC or Mac, but that won’t be much help to iOS users.

So, while it’s an exciting step forward for lossless audio over Bluetooth, there are a few hoops to jump through to truly appreciate it.

A new feature that isn’t exclusive to a handful of yet-to-be-released smartphones is spatial audio support. Unlike rivals, Nura doesn’t make use of multichannel audio to process its spatial sound, instead upscaling stereo sound to provide a more natural listening experience.

It’s not quite as immersive as the experience on Apple’s AirPods, arguably the best spatial audio experience around complete with head-tracking, but the sound is notably more natural – especially when combined with the personalised audio.

It’s hard to explain to those yet to experience it, but it essentially brings the audio from within your ears to the space around your head for a speaker-like listening experience. Considering most recording studios use speakers instead of headphones for audio mastering, it’s arguably closer to the artist’s intended sound.

The active noise cancelling has also seen a boost this time around, upgraded to Adaptive ANC that’ll adjust the noise-cancelling frequencies depending on the noise in your environment.

This means the NuraTrue Pro does a notably better job at tacking specific sounds like chatter and the rush of cars going by as you walk down the street than its predecessor, though it still performs better with low-frequency tones than higher ones.

The NuraTrue Pro are available to back on Kickstarter right now – a hat-tilt to the OG campaign that kickstarted the company back in 2017 – with release set for “later this year”. According to the Kickstarter campaign, that’ll likely be around October 2022.

With such premium features, it should come as no surprise that the buds are comfortably premium with a $329/£299 price tag, putting them up against the likes of the Sony WF-1000XM4 (currently our top pick for wireless earbuds) and the Bose QC Earbuds.

The good news is that if you decide to back the Kickstarter campaign, you’ll get a discount – but be quick if you are tempted, as there’s only limited stock available.

If you can’t wait that long, take a look at our hand-picked selection of the best Bluetooth headphones.

The NuraTrue Pro are a genuinely exciting next step in Nura’s journey, offering not only personalised audio that’s rich and full, but for the first time ever, (almost) CD-quality lossless audio support via Bluetooth. The issue is, at the time of writing, there aren’t any smartphones with the Snapdragon 8+ Gen 1 to take advantage of it – though that’ll be less of a problem at launch later this year.

Still, lossless audio aside, there’s a lot to love about the NuraTrue Pro. It has a lightweight yet elegant design with ceramic highlights, solid battery life both in the buds and the accompanying case, and new touches like wireless charging, spatial audio support and upgraded adaptive ANC make the high price tag a little easier to swallow.