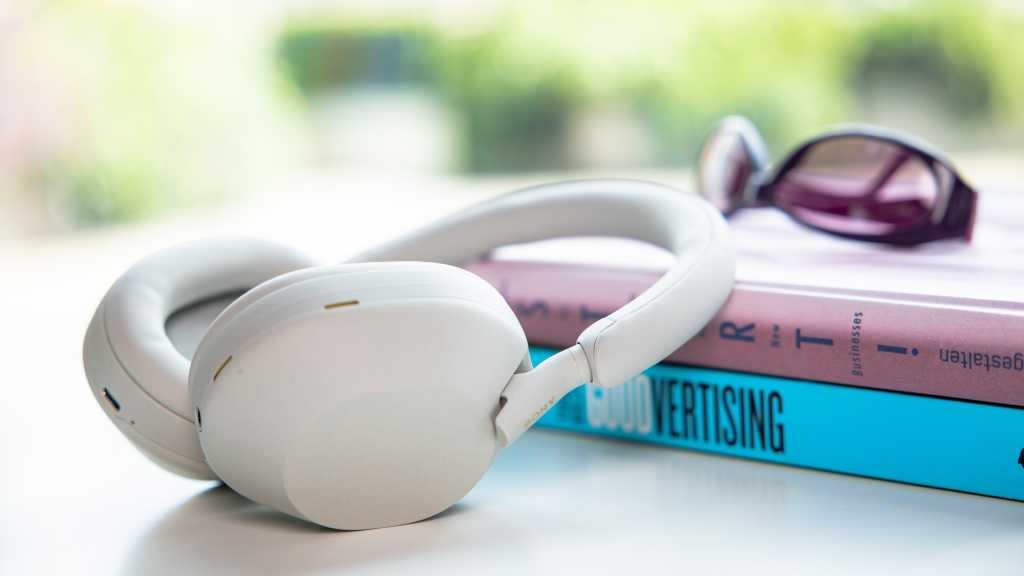 The WH-1000XM5s are another pair of fantastic noise-cancelling headphones from Sony. The company has tweaked and refined sound quality, ANC, and the design, and all for the better – though some will no doubt miss the option to fold these away to fit a pocket.

The WH-1000XM5 is the fifth generation of Sony’s over-ear noise-cancelling headphones. Despite strong competition from rivals including Bose, year after year Sony’s efforts have been widely recognised as the best ANC headphones on the market, and there’s no sign of that changing yet.

Admittedly, not much has changed from last year’s excellent XM4s, but that’s the price of excellence: Sony is limited to refining, rather than re-inventing, with a focus on design tweaks, a totally new carry case, and upgrades to audio, ANC, and call quality.

All of that has brought with it a price increase too – but the XM5s are still worth the premium, and prior generations have all enjoyed generous price cuts post-launch, so we’d expect to see the same here.

At first the XM5 headphones may look pretty similar to last year’s XM4s, but dig deeper and you find a plethora of design tweaks.

Once again they’re available in a basic choice of black or ‘platinum silver’, though the latter – pictured – is to my eyes more like a light cream. Other colours may arrive in the future. When I first unboxed the XM5s I was a touch disappointed by the look and feel, and to me the plastic used across the body felt strangely cheap.

I’ve stopped noticing after a couple of weeks with the headphones though, and I won’t complain too much given that the change seems to come from an admirable move to recycled materials as per the LinkBuds and LinkBuds S. The packaging is also plastic-free.

The broad shape is essentially the same, though the design has been simplified and streamlined. There’s a slightly sharper angle to the slanted edge of each cup, making the outer touch-sensitive area smaller.

The headband has had a bigger redesign. It’s smaller and sleeker, though still comfortably padded. Stepless adjustment means tweaking the fit is a smoother experience, and allows for a more delicate design, though overall the headphones weigh about the same (250g).

Overall, these are certainly comfortable cans. They’re light, adjustable, and the soft (faux) leather earcups are snug and supple – though sweaty in the heat.

One downside to the design is that, unlike their predecessors, the XM5 headphones can’t fold up. That means it’ll be impossible to cram them into a pocket or purse, so they’re a bit less portable.

As a consequence the new carry case (included with the headphones) is quite tall too, and will take up most of a backpack – though since it’s thinner too, the new shape may suit some slim bags better. Sony describes the case as ‘collapsible’ when the headphones aren’t inside, though in practice you can only squeeze it a little to eke out a few millimeters more space.

Controls are sparse. There are only two buttons, both on the left cup: a power button that’s also used to activate Bluetooth pairing, and a toggle button for noise cancellation and ambient mode. Touch controls are limited to the right earcup (sorry lefties) and are used to play, pause, skip track, and adjust volume.

After using the same audio internals for two generations, Sony has revisited its approach for the XM5 series. Counter-intuitively, the company has actually adopted smaller speaker drivers – 30mm, down from 40mm – which you might worry would worsen output, especially at the low end.

I didn’t review the XM4s, and it’s been two years since I tested the XM3s, so I won’t dare to make direct comparisons on audio quality. What I will say is that audio is excellent, and I don’t remember previous versions delivering anything better.

The clarity and openness to the soundstage here is almost unmatched, with expansive, precise audio.

The upper end of the spectrum is rich, detailed, and vibrant, making these perfect for poppy vocals and guitar-led indie.

Bass is just as clear, with none of the muddy murkiness often found at the low end. That doesn’t mean there’s a lack of power though, with plenty of oomph to drive the propulsive beat of Run the Jewels’ ‘Out of Sight’ or Blue Hawaii’s trancey ‘Where Is the Sun???’.

If you want absolutely eardrum-quaking bass these probably aren’t the cans to deliver it, though cranking up the bass on the adjustable EQ in Sony’s official app will compensate somewhat. This will really only be an issue for the extreme end of electronic music and hip hop though, and it’s hard to imagine that any headphones that beat the XM5s on bass would also match them on clarity.

Calls are also excellent. A variety of microphones, voice isolation, and wind noise reduction all combine to pick your voice out well from the hubbub around you.

As you might expect from flagship Sony headphones, the WH-1000XM5 offer Hi-Res Audio by way of Sony’s own LDAC codec (there’s no aptX here) so you’ll get up to 24bit/96kHz audio without wires if you have a compatible device such as the Sony Xperia 1 III. Otherwise it will revert to the more basic SBC and for iPhone users, AAC.

Sony’s XM series has always excelled at active noise cancellation (ANC), and this generation takes another – albeit small – step forward.

The key inclusion here is the ‘Integrated Processor V1’ chip, which works alongside the existing QN1 noise cancellation processor to improve performance.

Those two chips, together with no less than eight microphones, do an excellent job of cutting out audio. I’m writing this on the hottest day on record in the UK, with a Dyson fan at full blast mere inches from my face, and I can’t hear a thing – not even the sound of the air itself hitting the headphones.

The XM5s do a great job of cutting out everything from traffic noise to trains, replacing it all with a comforting blanket of silence. There really is basically no better.

The ANC is joined by an Ambient mode which amplifies outside sound – allowing you to hold conversations with the headphones on, or hear your surroundings when you want to cross the road.

There’s a dedicated button for this on the headphones, but also an optional ‘Adaptive Sound Control’ mode. This tries to learn based on where you are (at home or the office, for example) and what you’re doing, scaling the ANC up or down or switching to Ambient as appropriate – increasing external noise when you’re by a road, but decreasing it if you’re sitting still.

Last time I tried this on a pair of Sony cans I turned it off within hours, but the tech has come on a long way. There’s still work to be done though – the headphones are still prone to mistake sitting on public transport for walking by a road – and to be honest, if you walk a lot in a city you might not want ambient sound to be amplified every time you’re near traffic, which may well be all the time.

Many of the smart features included in the XM5 are returning from the XM4s – or are rapidly becoming standard at the premium end of the headphone market.

Google Assistant and Amazon’s Alexa are both built in, with hands-free voice activation available for both.

There’s also full support for Android’s Fast Pair tech, which makes setting the headphones up on an Android phone basically a matter of a single tap. It also supports the Google Find My service, making it easier to track the headphones down if you misplace them. There’s also Swift Pair for Windows devices.

Multipoint connection means you can pair the headphones with two devices simultaneously, letting you watch a video on your laptop then switch to your phone seamlessly when a call comes in.

Spotify Tap support means a quick double-tap of the ANC button can get your music going immediately, and support for both Dolby Atmos and 360 Reality Audio will kick in for compatible content.

Setting aside third-party integrations, the headphones will pause your music the moment you take them off, and resume when you put them back on – which has proved pretty reliable to me.

Hold your hand over the right cup and Ambient mode will also kick in immediately if you need to quickly hear your surroundings. I’m also a fan of the Speak-to-Chat mode – the name may sound like a truism, but this is actually tech that pauses your music and activates Ambient mode when it detects your own voice, before restoring your settings shortly after you stop speaking – ideal for short conversations with shop staff and baristas.

One thing Sony hasn’t changed is battery life. The company estimates that the XM5s will run for the same 30 hours it predicted for the XM4 model with ANC on, and you can get an extra 10 hours if you switch noise cancellation off.

It’s tricky to exactly measure headphone battery life, but I can say that in the two weeks I’ve been using the XM5s I’ve only had to charge them back up once despite fairly regular use – so longevity doesn’t seem to be a problem.

Charging is nippy too. The headphones have a USB-C port for topping up, and if you use a USB-C PD charger (not included) you can get up to three hours of battery back in just the same number of minutes. A full charge takes just a few hours.

The WH-1000XM5 headphones are available now worldwide, and you can buy them direct from Sony or from Amazon and other retailers.

Arguably the biggest rival for the XM5s are the XM4s though. Last year’s model remains excellent, and cost a little less at full price – but you needn’t pay that much as they’re often available for much less. Most buyers will get better value by buying an older generation.

For more rivals, check out our guide to the best headphones, or more specifically the best noise-cancelling headphones.

The WH-1000XM5s are only a small step forward, but a reminder that Sony is near-unrivalled at high-end comsumer headphones.

The premium design benefits from a streamlined headband and improved adjustment, though some may well prefer older models’ option to fold into a compact, pocket-friendly shape.

The new 30mm drivers still deliver plenty of bass, but balance it with phenomenal clarity and openness, while Sony’s ANC remains the absolute business.

Throw in impressive battery life and an array of helpful smart features and shortcuts, and it’s hard to see much room to improve on – which is pretty much what we thought last year too.

They’re certainly not cheap, but if you can afford to pay for the quality then right now you can’t do better – and if you can’t, then you can always pick up last year’s model on the cheap.