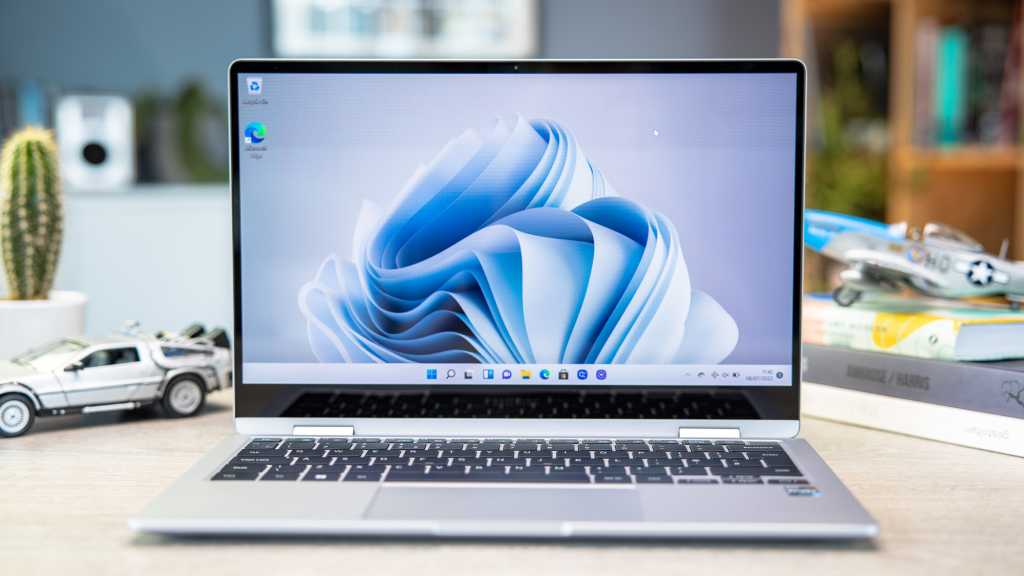 Dominik Tomaszewski / Foundry
At a glance

The Book 2 360 nails the basics to provide a compelling laptop experience. Samsung fans will be satisfied, but better value can be found elsewhere in the ultra-competitive laptop market.

For a company that stopped selling laptops in Europe as recently as 2014, Samsung’s recent rise has been impressive.

The Galaxy Book range has rapidly expanded over the last few years and now offers a device at nearly every price point. Starting at $899.99/£949, the Galaxy Book 2 360 is one of the more affordable options, particularly among those running Windows 11.

But competition at this price point is fierce. Is this lightweight convertible worth buying, or is your money better spent elsewhere? Here’s my full review.

The design of the Book 2 360 is typical of most modern Samsung laptops. It’s an impressively thin (12.9mm) and light (1.16kg) device, but retains all the hallmarks of the premium Galaxy Book range.

An aluminium finish adds to the high-end look and feel, but Silver is your only colour option in the UK – there’s a Graphite version available to US customers. But Samsung is clearly going for an understated, minimalist aesthetic, which is only interrupted by a discrete logo on the back.

This design certainly won’t be turning many heads, and it looks very similar to many other modern laptops. But it’s clearly effective, and there’s no need for Samsung to take big designs risks on a device like this.

A 360° hinge is anything but revolutionary, but a durable build means you get convertible functionality without it feeling flimsy. The option for a ‘tent’ mode or tablet is useful in some scenarios, but the pure tablet experience still isn’t great. The Book 2 360 is much heavier than even the Surface Pro 8, making it uncomfortable to hold for more than a few minutes.

The best experience is still as a traditional laptop, where I was impressed by the lack of screen movement while typing. This is something that often affects convertibles, including some made by Samsung.

You still get a decent sized 13.3in display, but the chunky bezels above and below it are a disappointment. Samsung has managed to keep them razor-thin on the sides, and there’s no obvious benefit to making them so big here.

Indeed, the only thing you’ll find above the screen is a 720p webcam, but Samsung hasn’t shown it much love. Stills and video are low quality and grainy, making for an underwhelming video calling experience. Dual mics mean you sound pretty good, but I’d highly recommend buying a separate webcam for anything more than casual calls with friends and family.

Without a separate IR sensor, you can’t use Windows Hello face unlock on the Book 2 360. The fingerprint sensor built into the power button is your only alternative, but it performs very well. Following a fast and easy setup process, it proved to be a fast, reliable method for unlocking the device.

Despite being relatively thin, Samsung has still made room for a decent port selection. Either of the USB-C ports can be used for charging, although only one supports Thunderbolt 4 for ultra-fast data transfer.

It’s joined by one USB-A, full-size HDMI, microSD card reader and 3.5mm headphone jack. Adding another USB-A port would make this pretty much perfect, but it’s still above average for a thin and light laptop.

The Galaxy Book 2 360’s design isn’t anything to get excited about, but the display is a different story. It’s a 13.3in AMOLED panel at a resolution of 1920×1080, giving it the increasingly rare 16:9 aspect ratio. However, adjusting from a boxier 16:10 or 3:2 screen should only take a few minutes.

This isn’t the absolute best display you’ll find on a laptop, but it’s still mightily impressive. It delivers rich, vibrant colours and an excellent level of detail – most people won’t miss not having a higher resolution. A high refresh rate would’ve been nice, but it’s usually reserved for high-end devices or gaming machines.

Internal testing reflects the quality of the screen. According to SpyderX Pro, the Book 2 360 covers the full sRGB and P3 colour gamuts and 96% of Adobe RGB. A peak brightness of 369 is less impressive, meaning you’ll struggle to use the device in most outdoor environments.

Touch support is a real plus, especially when the keyboard is folded out of the way. Windows 11 is much better than Windows 10 for touch input, so it was nice to use this alongside other navigation methods. There’s no S Pen built into the device or included in the box, but it’s still compatible with Samsung’s stylus if you’d like to buy it separately.

Audio is delivered via dual 2W speakers. The sound they produce is crystal-clear, but it lacks the depth you’ll find on other laptops. Voice-based content still sounds great, but music tends to be a bit washed out. It’s fine for casual use, but doesn’t match the immersive experience offered by the display.

The Galaxy Book 2 360 has fairly standard dimensions, so it’s no surprise to see a full-size keyboard. I’m glad Samsung decided not to squeeze in a separate number pad here, as it makes for a much more comfortable typing experience. Each key offers three levels of backlighting, meaning you can still work in near total darkness.

But you will have to get used to a relative lack of key travel, meaning you miss out on that satisfying clicky response when you type. However, typing is significantly quieter as a result.

Samsung has put the row of function keys to good use, with the regular brightness and volume controls joined by quick access to Settings, external display options and a screen lock. However, you do have to hold down the Fn key to start using them.

There’s still room for a large trackpad, which is very responsive and supports the full range of Windows 11 gestures. But from where your palms naturally rest, it’s fiddly and awkward to use. That lead to quite a few accidental presses during testing, while at other times it wouldn’t register at the first time of asking. For anything longer than a few minutes, I’d recommend connecting an external mouse.

Even on the cheapest configuration, performance is impressive. My daily workflow typically involves browsing the web, sending emails, typing documents and the occasional video call. The Book 2 360 handles all this with relative ease, even when completing several tasks at once. A built-in fan does eventually kick in, but it remains quiet and effectively prevents the device getting warm.

There was no noticeable slowdown whatsoever, making it a great everyday laptop. Opting for the i7 model will boost performance even further, but I’d be reluctant to recommend it for more demanding tasks.

That’s because it uses Intel’s Iris Xe integrated graphics, rather than a discrete GPU. It’s a great option for a lightweight convertible, but don’t expect to be able to edit 4K video or properly game without some significant slowdown. Indeed, 3DMark predicts Battlefield V – a AAA title – can only run at under 20fps when set to 1440p. If you’re serious about gaming, there are plenty of great alternatives.

When it comes to internal storage, you can choose between SSDs of 256GB or 512GB. It’s unlikely anyone buying this laptop needs 1TB, and you can always connect a microSD or external hard drive if you are running out of space.

The size of the Galaxy Book 2 360’s battery varies slightly depending on the model you choose. On the Core i5 model you get a 61.1Wh cell, but the Core i7 version has a fractionally higher 63Wh capacity. That may offset the slight increase in power consumption of an i7 chip, but you probably won’t notice a difference.

In general, battery life is excellent. You’re looking at a full day on a single charge, provided you don’t play lots of hi-res videos or keep the brightness close to max – more than can be said for many laptops these days.

What’s more, our testing proves you can eke even more out of the battery. Looping a 720p video at 120 nits isn’t typical of real-world usage, but the Book 2 360 lasted 14 hours and 58 minutes – one of the best scores we’ve seen. That was with battery saver mode turned off, too.

When you do run out of charge, the 65W adapter included in the box will soon get you up and running again. I recorded 24% in 15 minutes from off, then 46% by the half-hour mark. In under 75 minutes, it was fully charged. Either of the two USB-C ports can be used to get these impressive speeds.

As expected, the Galaxy Book 2 360 runs Windows 11 Home out of the box. Unlike with phones, the software experience here is consistent with almost every other Windows 11 laptop. It’s well-optimised for a 13in display, and there are plenty of customisation options available.

However, that hasn’t stopped Samsung from pre-installing lots of its own apps. The company has its own versions of settings, gallery, notes, updates, alongside separate search and sharing tools. These genuinely add something to the experience if you have a Samsung phone or tablet, while they’re easy to ignore for everyone else.

As it’s running the latest hardware, the Book 2 360 will be among the first to get any new software updates. It’ll be supported by Microsoft and Samsung for many years to come.

That puts it in flagship laptop territory, where there are already several great options. Despite having a lower price tag than some other Samsung laptops, the Book 2 360 can’t be considered an affordable device by any means.

A more realistic area of success is among 2-in-1 devices, where the Pro model from 2021 ranks highly. Its successor has the S Pen included and the option for a 15.6in screen, but if you don’t care about either of these things the regular Book 2 360 is still a decent pick.

If you want your next laptop to be a convertible, the Galaxy Book 2 360 is definitely worth considering.

Despite not having top-of-the-line specs, it performs well across three key pillars of a great laptop: display, performance and battery life. Charging speeds are decent too, while there are more ports than you’d expect from such a thin and light device.

However, it’s not all good news. The Book 2 360’s webcam is a real disappointment, while the keyboard and trackpad could both do with some work.

These won’t be dealbreakers unless you rely on the internal camera for video calls, although the strength of the competition makes it more difficult to recommend. If you’re set on a Samsung laptop this will serve you well, but better value for money can be found elsewhere.