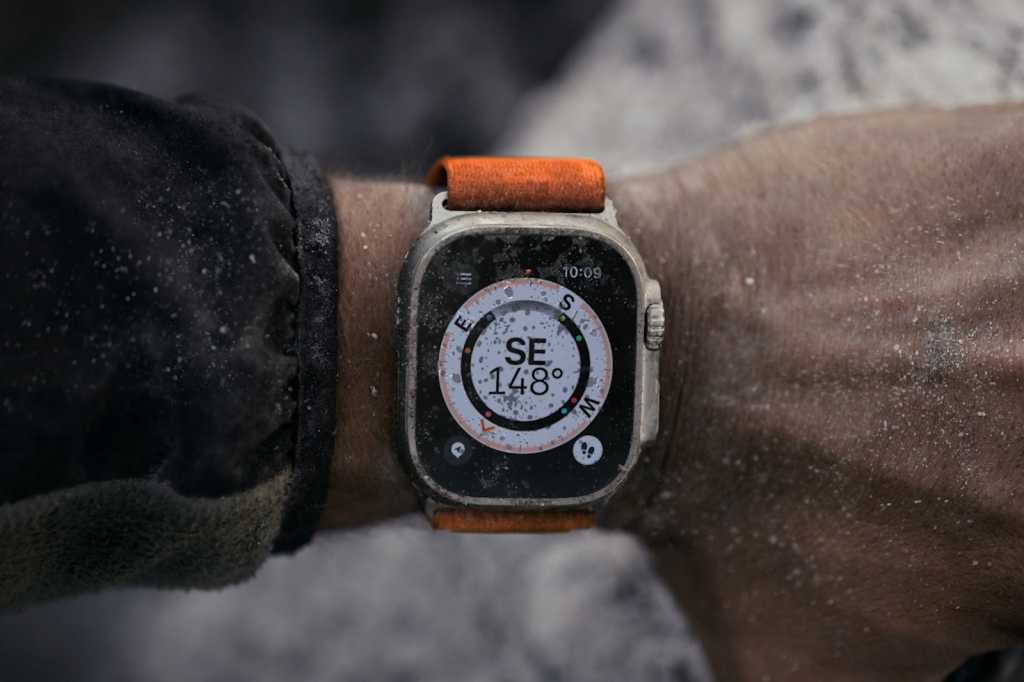 Apple has launched a brand new Apple Watch, called Ultra. The smartwatch, which costs $799 / £849 is designed for outdoor activities that are more extreme than standard Apple Watches can cope with.

The case is made from titanium and it rises up to surround the completely flat screen, which is made from sapphire crystal (as found on iPhone cameras). This should help to protect the Watch Ultra’s screen from damage while you’re rock climbing.

The display, which measures 49mm across (1.93 inches) is twice as bright as any previous Apple wearable, capable of 2000 nits. That should help you see which direction to go even in the brightest condition.

Plus, there’s a new orange button – the action button. This does (almost) whatever you want it to. For example, you can press it to drop a waypoint along your route, so you can find your way back later.

There’s a dual-frequency GPS which supports L1 and L5 frequencies. Along with new positioning algorithms, it’s the most accurate GPS in an Apple Watch yet. But should you still get lost or run into serious trouble, there’s an 86dB siren that can alert rescue teams to your position.

The crown and side button have been re-designed: they’re more prominent and can be used while wearing gloves. And talking of gloves, the Ultra is tested to work in temperatures from  -4° F (-20° C) to 131° F (55° C). It’s also certified to military-spec standards for things such as low pressure (altitude), temperature shock, contamination by fluids, humidity, sand and dust, freeze/thaw, freezing rain, plus shock and vibration.

Apple has added a second speaker for louder sound, and there are three microphones so those you call can better hear you.

Call you can, because all Ultras have built-in cellular connectivity. However, the rumoured satellite comms aren’t present, so you’ll still need to be close enough to civilisation to get a phone signal.

One rumour that turned out to be true is that the Ultra has a larger battery than a standard Apple Watch which can provide up to 36 hours of ‘normal’ use. But if you won’t be able to charge it for longer than that, there’s a power-saving mode which extends that up to 60 hours at the cost of lower-frequency GPS updates and heart rate readings.

Designed to take advantage of the bigger screen is the Wayfinder face. This has a compass built into the dial, as well as space for eight complications. It also has night mode which turns the display red to make the face easier to read in the dark. It’s enabled by simply turning the crown.

Apple says you can wear your Watch Ultra for “recreational diving”, which means up to 40m / 130 feet. It also has a new depth gauge which works with a new Depth app to provide the current depth, water temperature, duration under water and the maximum depth reached.

It also has all the usual Apple Watch features including ECG and blood oxygen monitoring, and the new body temperature sensor that’s in the Series 8 which is designed to more accurately track women’s cycles, as well as the motion sensors for detecting when you’ve been involved in a car crash (and automatically calls the emergency services for you). Processing power comes from the same chip in the Series 8, too.

The Watch Ultra runs watchOS 9, which includes a redesigned compass app that has three views. One is a hybrid that shows an analogue and digital compass, but another displays your latitude, longitude, elevation and incline, while the third is an ‘orienteering view’ that displays waypoints and Backtrack.

The latter uses GPS to trace your route to the current position, so you can go back the way you came if you become disoriented.

It’s available in Australia, Canada, France, Germany, India, Japan, the UAE, the UK, the US and 40 other countries.