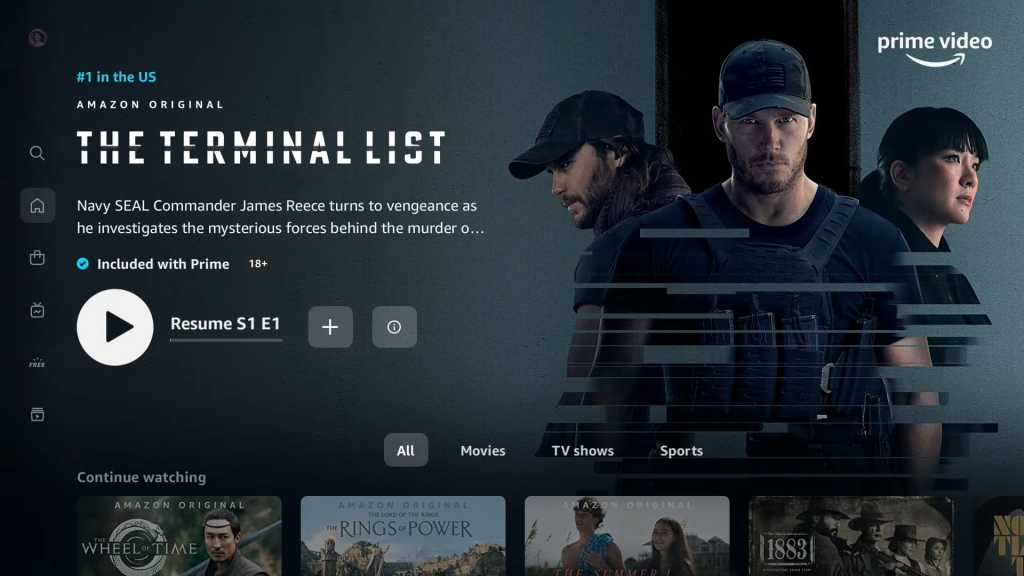 Amazon has confirmed that Prime Video will be rolling out a brand-new interface over the next couple of weeks across the globe, with a revamped home screen, new carousel designs, a section dedicated to live TV, and more.

The redesign has taken 18 months to develop, with feedback from testing groups throughout the process. Amazon’s previous Prime Video interface was known for being clunky, so this refresh is long overdue

The new design isn’t dissimilar to the home and search sections of Netflix. On the left, there is a vertical list with six navigation icons: Find, Home, Store, Live TV, Free with Ads (where Amazon Freevee content will sit) and My Stuff. The centre of the screen meanwhile is dominated by a trailer that plays for a film/series based on the algorithm of the user.

The Home page has sections for films, TV shows and sports, as well as a top 10 screen for the most popular shows on Prime Video at the time. These are all tweaks to help people easier find and search for content more efficiently.

Amazon Originals and Prime Exclusives are displayed in a poster-style carousel (something Amazon dubs a ‘Super Carousel’), and again trailers automatically play when the user scrolls over a certain show to further entice viewers to keep watching.

Prime Video does still have a mix of free content for subscribers, as well as paid TV shows and films. However, the free content has a blue checkmark in the description, so people know that they do not cost extra, whilst paid shows and films are marked with a gold shopping icon.

The ‘My Subscriptions’ row on the Home page can be used to filter content that is only available on subscriptions on that account, making the catalogue much more streamlined. Users can also subscribe to other streaming services (such as Paramount+) through the app via the Store section.

Product Director Helena Cerna noted that the new layout emphasises some of the things that make Amazon Prime Video stand out against competitors.

“In usability testing, we repeatedly heard the phrase, ‘wow, I didn’t even know Prime Video had live TV’”, she said.

The Sports section is also a win for Amazon, as this is an area Netflix and Disney+ do not cover.

The new interface will be rolling out initially to Android phones and tablets, smart TVs, Amazon Fire TV devices, Roku devices, Apple TV, Android TV and games consoles. iOS and web users of Prime Video will have a little longer to wait, but the design will be available in the future.

Those with older devices will miss out on the redesign. For example, it won’t be supported on PlayStation 3 and the third generation Apple TV (2012). These will only run the old version of Prime Video.

See how Prime Video compares to rivals in our list of the best TV streaming services.