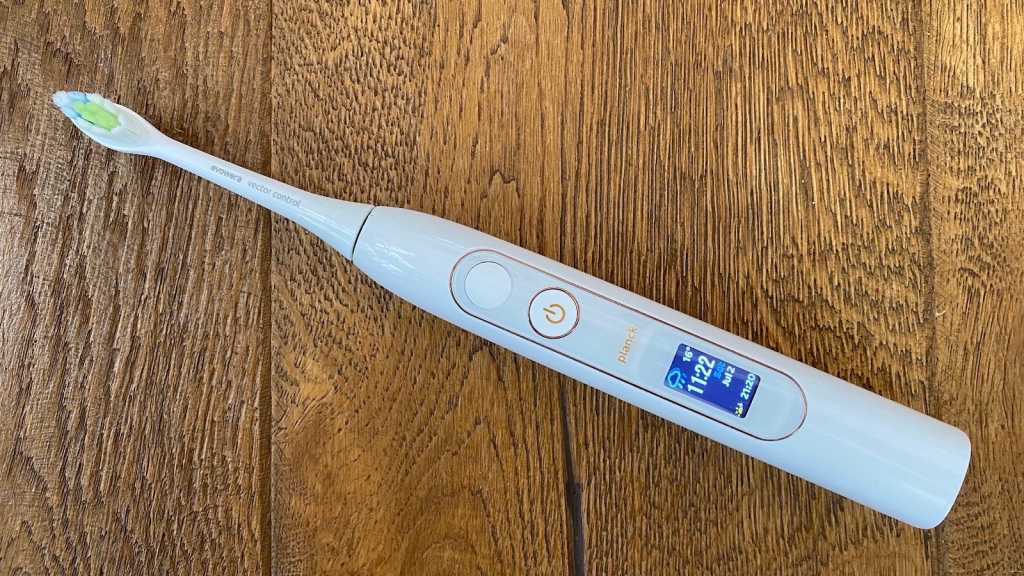 Emma Rowley / Foundry
At a glance

It’s an effective, well-made sonic toothbrush with a good range of brushing modes, excellent battery life and quick charging. But its over-complicated smart features are more likely to overwhelm the user with data than improve brushing performance.

The Planck O1 is the first sonic toothbrush to be launched by consumer electronics company Evowera. It’ll give you brushing feedback and even adapt its cleaning strength to your dental needs. We check out the buzz.

The Planck O1 is a sonic toothbrush, available in both black and white. At first glance, it looks like many competing sonic toothbrushes on the market, with a small oval brushing head and a chunky, slightly squared-off handle. It doesn’t look a million miles away from a Philips brush, for example.

But if the overall shape is commonplace, its high-quality build isn’t. It’s light in the hand, with an attractive glossy finish. The display and power button are finished with a copper-colour trim. It’s waterproof, as well, with an IPX7 rating, so you can take it into the shower.

In the box, you’ll get the Planck O1 brushing handle, two replacement brushing heads, a cable and a wireless charging base with a USB connector. The base lights up as the brush is charging. You can even use this illumination as a night light.

Stand the Planck O1 in the base and it’ll reach full charge in 3.5 hours – in my testing, perhaps even a little less. If you’re used to a brush that takes 12 hours to charge, this is a huge plus.

The Planck O1 claims a battery life of 28 days. While testing it, it achieved a little over three weeks, but I was brushing for longer than the dentist-recommended two minutes, twice daily.

It doesn’t come with a travel case, which is a shame. With its long battery life, it would be an ideal brush to take on trips.

There are other features that set the Planck O1 apart. First off is the full-colour LCD screen that displays the date and time when you pick it up. There’s a choice of eight screen themes – some also show the local temperature and time of sunset.

There are two buttons on the handle. There’s on/off button and a second that lets you choose between six brushing modes, which are displayed on the screen: clean, white, sensitive, comfort (a second gentle programme) and therapy (for gum care). As you’re brushing, you can opt to turn the intensity up or down, which is another great feature.

There’s also an adaptive mode that claims to learn the way you brush and adapt to your technique. Does it? What I can say is that it noticeably changes frequency as you move it around your mouth.

During brushing, the screen displays the two minute timer and when it stops, it’ll show a map of your teeth with the brushing coverage you’ve achieved.

You can also see battery life and the expected life of the brush head on the screen. That’s a lot of useful information – but there’s also some that’s less useful. For instance, I’ve been using the brush for over a month. At the end of each session, it shows three bars, labelled coverage, duration and stress.

It seems that, if you’re brushing well, coverage and duration bars should be at their maximum level – but what’s the ideal amount of stress? What does that bar mean, exactly, and how I should use that information to take better care of my teeth?

And that’s before we even get to the app data.

You’ll need to use the app, at least during set-up, as you can’t access all settings on the brush handle itself.

There’s an extremely annoying power chime that you’ll probably want to switch off, and you can only do this in the app (although if you like it, you’ll be happy to hear that there are five annoying chime options for you to explore).

Plus, you’ll need the app to change the screen theme and choose the hand you brush with (important for mapping the mouth).

You can also change the standard brushing duration and mark up a mouth map to show sensitive spots, braces, root canal work and teeth with potential decay, which the Planck O1 will apparently then brush more gently.

The brushing feedback is shown in the form of radar charts and line graphs. It’s not really the kind of ‘at a glance’ information display that lets you know you’re brushing too hard or that you keep missing an area at the back of your mouth.

The data are in several categories: duration, coverage, amplitude, time interval (standard brushing time) and force. There’s a lot going on here, it doesn’t feel very user-friendly, and I’m not sure how to apply the information in the amplitude or force charts to improve my brushing.

Mechanically, the Planck O1 is a quiet brush (Evowera says it’s under 48 dB A) but it makes a high-pitched whine as it cleans that may be more off-putting to some than a noisy motor.

But it does brush effectively and will leave your teeth feeling clean. And the intensity range means you can get brushing just right. Everyone should be able to find a cleaning mode that works well for them and adjust it based on daily needs.

As I previously mentioned, the screen on the handle also shows brushing coverage achieved. I’m not entirely convinced of its pinpoint accuracy, but overall, I think this feature did help me to be more mindful of brushing carefully.

There’s a lot going on with the Planck O1, so it’s disappointing that it’s missing one key feature: an easy to read, real-time pressure sensor that alerts you if you’re pressing too hard when you’re brushing.

The Planck O1 is available in black or white for $179.99 from Amazon US and it comes with three additional replacement heads. In the UK, it costs £149.99 and you can also get it in black or white.

The other expense to take into consideration is the cost of replacement brush heads. These are pricey. In the US, they cost $29.99 for a three-pack in either black or white.

In some publicity materials, Evowera says you can use brush heads from other brands, although on the website it says not to. I gave it a try and can confirm that Philips Sonicare brush heads fit onto the handle (although there’s a big gap between handle and head) and the brush seems to work normally, although brushing feedback may be affected. Generic Sonicare brush heads, then, could save you some money over time.

Where its smart features are concerned, it’s a case of information overload. Simpler feedback would be more useful to most people than the in-depth charts. Plus, some of the extra features are unnecessary. Do I need a toothbrush to give me information abut the weather? Or track my menstrual cycle (which, according to the website, it can also do)? No, I don’t.

However, this is a well-made, effective sonic toothbrush. Its brushing performance is excellent and the choice of modes and intensity settings is useful. And to top it off, the fast charging and long battery life are great features.