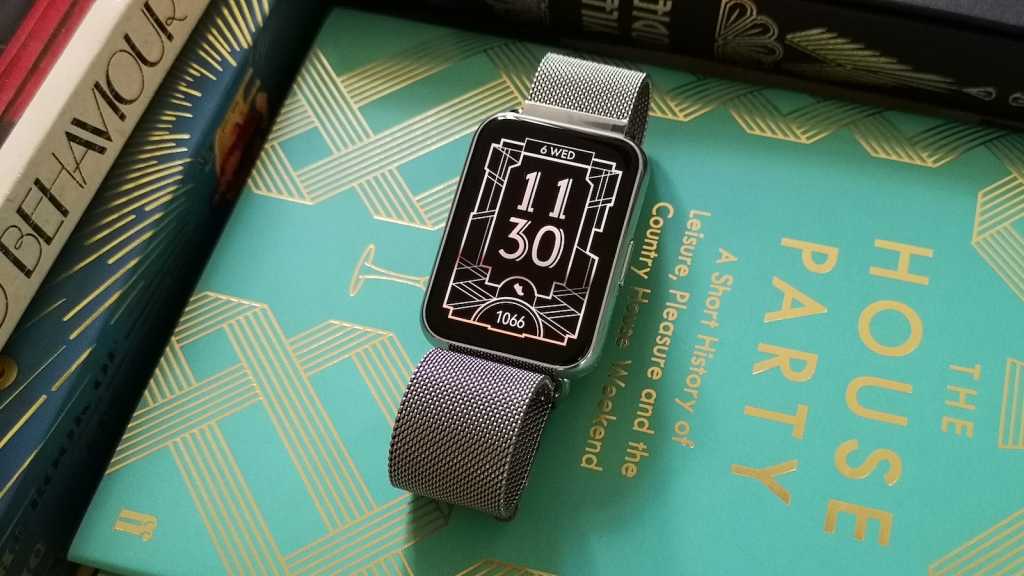 The Huawei Watch Fit 2 is a real head-turner, and a capable fitness instructor. While it’s easy to get to grips with, offers great battery life, and is competitively priced, for fitness purposes, it’s better suited to beginners than 24/7 gym dwellers.

The Huawei Watch Fit 2 is one of the latest smartwatches from Huawei with an emphasis on fashion as well as fitness.

It’s a little cheaper than Huawei’s own Watch GT 3 Pro and Watch GT Runner, but is also a bit pricier than the Fitbit Charge 5, and the recently-launched Huawei Band 7. It sits somewhere in the same price bracket as the running-centric Polar Pacer.

The Watch Fit 2 is therefore better suited towards people who are more interested in light exercise or who are just starting a Couch to 5K-type program, and/or people who want a smartwatch that’s something of a statement piece as well as an exercise aid.

The Huawei Watch Fit 2’s design is simple yet stylish – it’s a rectangular case with rounded corners, and a single button on the side.

The watch case measures 46 x 33.5 x 10.8mm, and while that’s not as flush to your wrist as, say, the Fitbit Charge 5, the profile is still pretty low, meaning most long-sleeved garments ought to slide nicely over the top.

Like the original Watch Fit, it looks more like a miniaturised phone than the likes of the Huawei Watch GT Runner or Polar Grit X Pro, whose circular displays and chunky straps mimic traditional watch designs.

There are three versions of the Huawei Watch Fit 2, Active, Classic, and Elegant Editions, and it’s easy to tell who these are all aimed at.

The Active models are made from plastic, feature silicone straps, and are clearly geared more towards people who aren’t likely to mind if their watch gets rained on, or caked in a bit of mud.

The Classic version features an aluminium body and a leather strap, and is a bit pricier, while the Elegant watches are pricier still, but feature a very fetching Milanese mesh strap which fastens with a magnetic strip instead of the typical buckle.

The version I was sent was a silver Elegant model, and the magnetic clasp was very nifty indeed. Having said that, the mesh strap did often move around on my wrist a bit during runs in the park. While I never felt that the thing would fall off, it did make me wonder if the accuracy of the heart rate monitor would be compromised.

Again, if your interests lie more in the direction of calisthenics than aesthetics, your choice is clear. It’s good that you have a choice as well – the original Watch Fit only came with one strap option and that was silicone, or go home. The straps also connect to the case with a click to release mechanism, so switching one out for another will be no problem.

Regardless of which version you opt for, the internal components and functions are the same.

The Watch Fit 2’s display is bright, detailed, and responsive, all of which makes it easy for you to read messages and action commands whether you’re mid-exercise or in the middle of a meeting. The speaker’s also loud enough for you to be able to easily hear encouragements from the virtual coach when working out, and the speaker combined with the internal mic lets you answer and take calls via Bluetooth.

Huawei doesn’t list the maximum brightness of the AMOLED display, but I can confirm that it’s more than bright enough for you to be able to check your pace, distance, time and the rest when outside on a sunny afternoon.

The 9-axis IMU sensor, comprising an accelerometer, gyroscope, and geomagnetic sensor is clever enough to detect when you’re raising your arm in order to check on your vitals, powering on the display so that you can get a quick look at things. As with the Huawei Watch GT 3 Pro, there’s no way to adjust the sensitivity of this tilt-to-wake feature, but it’s good enough as it is.

Even if you’ve worked up a sweat, actually using the Watch Fit 2 is rarely a hassle, although more physical controls might have made this easier.

The Huawei Watch Fit 2 runs on HarmonyOS 2.1, and offers a user experience similar to what you get on watches like the Watch 3 and Watch GT 3 series.

The responsiveness of the display is complemented well by a reasonably logical layout which affords you a degree of customisation, although there are limits to what you can do.

Swipe right from the home screen and you’ll move through a series of panels, or ‘cards’ as Huawei calls them. These are things like shortcuts to the SpO2 (Pulse Oximetry) reader tool, heart rate monitor, call log, and weather widget, all useful stuff that you’d likely want to have close to hand when exercising.

But you can’t, for example, pin controls for basic functions, like volume, or brightness, as cards. And while you can add a shortcut to training plans you create on the Huawei Health mobile app, you also can’t add a shortcut to any specific workout routines.

It’s nice to be able to customise things like the appearance – I added a fancy art deco-type background to mine – but the customisation feels skin deep.

Other useful features include the Ringing tool, which causes your phone to ring if you’ve lost it, but also emits a voice which says ‘I’m heeeere’ in a way that’s not at all creepy. Music controls are simple, but effective, and whenever a text message comes through, you’re given the option of replying with a number of pre-set responses, or swiping the message away.

Huawei has added a wide range of workout guides to the Watch Fit 2, mostly centred around running, walking, cycling, and swimming, but there are also programs designed to track your efforts on cross trainers and rowing machines. While there’s no program specifically for things like yoga or lifting weights, you can still record exercise times and your heart rate as a generic ‘other’ workout routine.

For the most part, you’ll likely be recording workouts on an ad-hoc basis, or picking from a number of pre-set courses, ranging from the gentle ‘Run/Walk-Primary’ to the more intense ‘HIIT Run’.

You can plan out longer routines in greater detail via the Huawei Health apps (iOS, Android). These have simple layouts, and are easy to navigate. As well as acting as a dashboard from which you can look up daily step counts, and drill down into things like sleep data.

The Huawei Health app lets you share results of your efforts, either in the form of a JPEG, which is good for social media bragging, or in the form of GPX and KML files, should you wish to share your routes with other people on platforms which can accept these files. You can also offload heart rate, calories burned, and cadence in the form of TCX files, if you want to use this data elsewhere.

Huawei says that you’ll get between 7-10 days’ worth of power off of a single charge, and based on my observations, I’d say that’s an accurate estimate.

It depends greatly on what you’re doing. If you’re working out every other day, you’re likely to need to reach for the charging cable sooner, but if you’re not exercising as frequently, you’ll be able to go further on a single charge.

For example, after 8 days, including a full working week, 1 workout, and 1 stag weekend, I was on 9% battery.

The supplied USB-A charging cable is a little fiddly to connect to the underside of the Watch Fit 2, and doesn’t easily stay in place. As is typical of most smartwatches, there’s no mains adapter in the box, just the cable.

Using a Huawei SuperCharge 22.5W mains adapter scavenged from an old Huawei P20 Pro review unit, I was able to go from empty to 87% full in half an hour, taking 53 minutes in total to charge up from flat.

The Huawei Watch Fit 2 is available to buy now, directly from Huawei.

On Huawei’s UK site, the Active Edition is priced at £130, while the Classic Edition models are £160. The most expensive Elegant Edition models cost £190.

You can also pick up Active Edition and Classic Edition models from Amazon UK, which is selling them for £129 and £159, respectively. There’s also currently a deal on at Amazon which sees you getting either version of the watch with some Huawei FreeBuds 4i bundled in, for £189.98, and £219.98 each.

Currently, only the Active Edition versions of the Watch Fit 2 are listed on Huawei’s Australian site, but it’s not possible to buy directly.

Instead, buyers should head to Auptimal, which is selling the Active Edition Watch Fit 2’s for AU$299, and the Classic Edition with the white leather strap later in the year, or MobileCiti, which has stock of Active Editions only, for AU$298.

Amazon Australia lists both Active Edition and Classic Edition versions of the Watch Fit 2, but was out of stock at the time of writing.

U.S. pricing and availability information was not available at the time of writing.

The Huawei Watch Fit 2 is a great-looking and easy-to-use smartwatch that’s geared towards health tracking, and comes with some useful extra features, such as the phone locator and Bluetooth calling. With the most expensive option priced at under £200, it’s more affordable than some competitors.

While there are a lot of options, you have less control over the fitness data than you would with other smartwatches, which might frustrate some, but those after a smartwatch which looks great and can help people kick start a new fitness regime, it’s a very compelling offer.