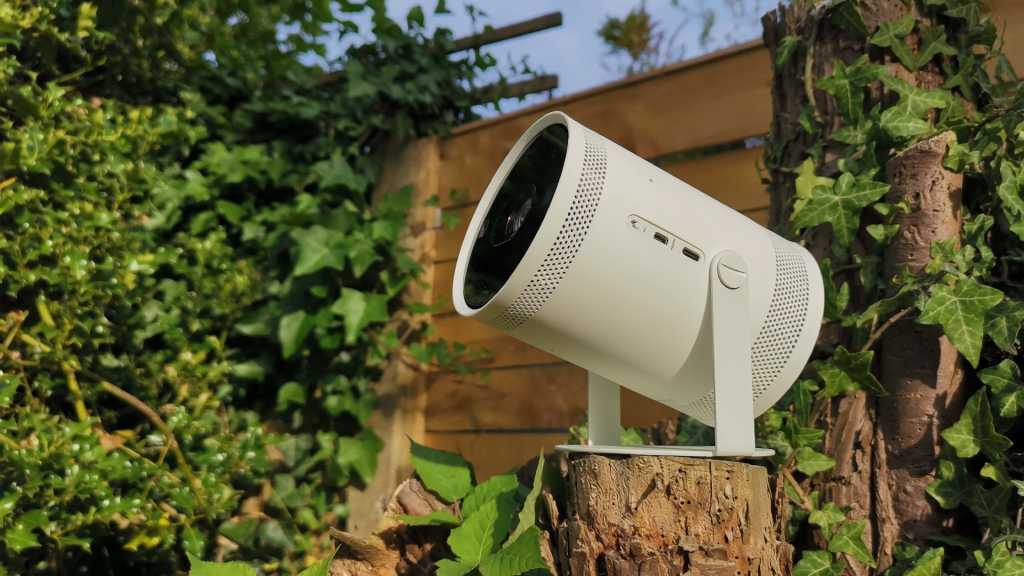 The Freestyle is a category-redefining projector that anyone can use. It’s ideal for al fresco movie nights, sporting events and kids’ parties, just don’t expect high-end performance

Projector, media streamer, ambient light source – the Samsung Freestyle is all these things, and probably a few more. We’ve seen portable Pico-style projectors before, but this is an almost unrecognisable evolution.

The cute circular beamer has an angled stand which allows you to point at a wall or the ceiling. It can also be driven off an optional battery pack, for wire-free use.

So is this the next-gen display device you’ve been waiting for?

The Freestyle, to give it it’s full name, has the girth of a jumbo can of beans (17 x 10cm) and sits on a directional pedestal stand that allows it to be pointed forward, backwards or straight up, 180 degree style.

It comes in white as standard with Forest Green an option in the UK. Across the pond, US buyers will have to spend extra on a skin to turn the Freestyle Forest Green, Blossom Pink or Coyote Beige for $29.99.

Physical controls are minimal. Once aimed, the projector’s auto-focus mechanism clicks in and its picture snaps into focus. The Freestyle can also automatically keystone-correct skewed images, within reason, to present a regular widescreen frame.

There’s a mini HDMI port, plus USB for external power supply use; the big idea is to use it wirelessly, connected via Bluetooth and Wi-Fi to your smartphone.

The projector squirts audio through a ring of perforations, to give something akin to 360 sound, while the base incorporates a full-width woofer. Audio power output is rated at 5W. There’s a plastic cap provided to protect the lens, which is surrounded by some touch-sensitive controls for volume, microphone and power.

Bundled is a tidy remote control, with menu navigation and Netflix, Prime Video, Disney+ and Samsung TV Plus hot buttons. Home calls up the main UI.

When it comes to usability, the Freestyle is built around the familiar interface of Samsung’s Tizen smart platform as per the firm’s TVs such as the QN95A. With access to a wide range of streaming apps and catch-up TV services.

Provided as standard are Disney+, Netflix, Prime Video, Samsung TV Plus, iPlayer, ITV hub, Apple TV, Now, YouTube, All4, My5, and Plex, but you can add more by opening the Samsung app store. It took just a few minutes to add the UFC Fight Pass app to my go-to services.

There are rails of curated content from the catch-up services, plus channels from the Samsung TV Plus free-to-watch programme bouquet. There’s no TV tuner onboard, but with such a diverse selection of live streaming apps on hand, you’ll hardly notice.

The projector can also be used purely for audio, streaming over Bluetooth, making this an over-specified smart speaker (details on the audio quality below).

While the Freestyle doesn’t have a built-in battery for true portability, it can run off the optional matching battery pack, or any external USB battery pack cells that are USB-PD and have a 50W/20V output or above. Check our list of the best laptop power banks for some options.

If you’re more into mood than movies, then there’s Ambient Mode, which offers a variety of coloured patterns and messages (‘Happy New Year’, ‘Happy Birthday’ and ‘Welcome’ for example). Other niceties include a Sleep Timer and Contrast Enhancer.

Arguably the most important characteristic of any small Pico projector is brightness. Thankfully, the Freestyle doesn’t fall at this first hurdle. Light output is rated at 550 lumens (aka nits) which is not bad for a device this size.

The Freestyle isn’t really suitable for use in rooms with high ambient light, but dim things down a bit or watch after dark and you’ll be impressed.

Resolution tops out at Full HD (1080p), and ostensibly there’s some support for HDR10 and HLG sources, but the idea that this projector is HDR capable is misleading. This isn’t a performance product, it’s a lifestyle gadget.

The light engine is LED, and is notable mainly for its solid reds and blues. Picture modes comprise Dynamic, Standard, Movie. Standard is the best all-rounder, offering the best blend of sharp imagery and colour authenticity.

There’s an inevitable constraint on the projector’s black level performance, and in a fully dark room, deep blacks are really grey, and near black detail is lost. Brighter images work better. But balance that with the ability to create a big picture in virtually any room space, and this shortfall will seem a price worth paying.

Sonically, the Freestyle is impressive – at least when compared to more conventional projectors. That circle of dispersion delivers a nicely balanced sound, with clean treble definition and appreciable mid-range weight. At everyday day volume levels, it easily drowns out operating noise, which is a little on the loud side at 30dB.

The Samsung Freestyle sells for US$899.99/£999 (model number SP-LSP3BLAXZA or SP-LSP3BLAXXU respectively). Australian buyers can pick one up for AUS$1,299

You can customise the Freestyle with a coloured cover. Choose from Coyote Beige, Blossom Pink and Forest Green, for $/£29.99 askin. There’s also an IP55 rated carry case complete with carabine clip, the VG-SCLA00G/XC, which can protect from dust and water when you’re out camping and the like. It’s priced at $/£59.

You can buy the Freestyle from Samsung as well as retailers including Argos, John Lewis, Currys, Very, Amazon, AO, Selfridges and more.

In the US, as well as the official store, you can get it from BestBuy, Newegg and Amazon.

The Samsung Freestyle is a novel projection proposition that could very well usher in a new category of display technology. Its HD performance eclipses standard small-form Picomodels, and it’s unquestionably versatile.

We think it can be used pretty much anywhere. It’s a great big-screen solution for smaller rooms that are unsuitable for a large, permanent TV  but conveniently have a wall ready to be filled, and works just as well in a kid’s bedroom or open plan kitchen space.

It’s even small enough to park on a desk if you want to bring a huge news feed to a spare wall in your home office.

Value is harder to judge, as it has no direct competitors. Overall though, we rate the Freestyle a top tier gizmo.