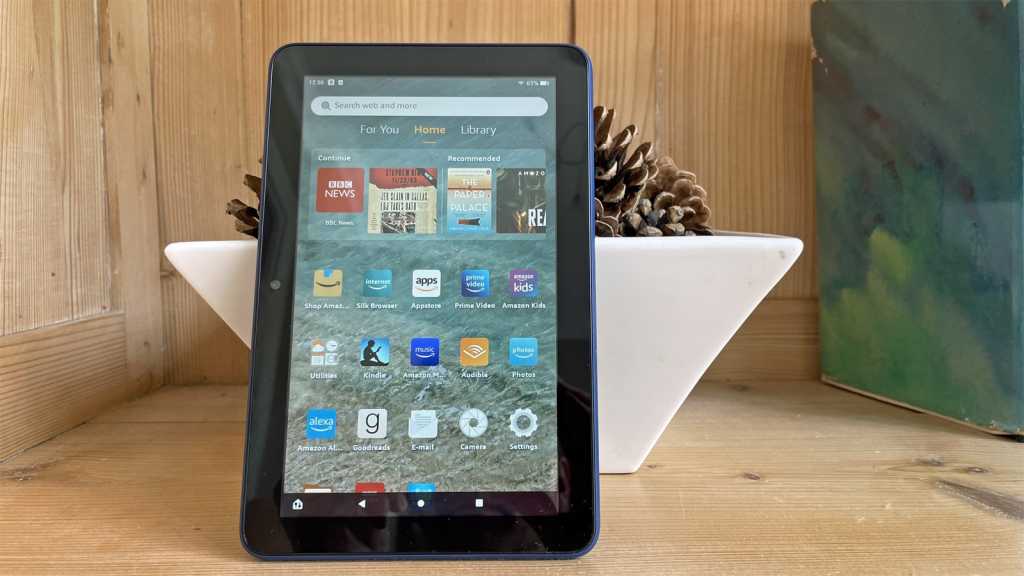 Improved battery life and (slightly) better performance make this new Fire 7 worth the extra money. It’s great for kids, but you may want to spend more if it’s for an adult.

Amazon calls it the 12th generation model, but that includes all models back to when they were called Kindle Fire. If you count only those called Fire 7, it’s the fourth generation.

None of this is relevant, of course, if you simply want to know whether this budget tablet is worth buying. And that’s exactly what we’ll explain in this review.

These might sound like criticisms – and they are – but you can’t reasonably expect better when you’re paying this little for a tablet. The entry-level iPad, for context, costs $329/$319, which is over five times more expensive.

As ever, it’s crucial to remember that the Fire 7 runs Amazon’s own operating system called Fire OS. It may be based on Android but there is no Google Play Store and no Google apps or services. The whole point of Fire tablets, as far as Amazon is concerned, is to be a shop window for Amazon services including Prime Video, Kindle, Audible, Amazon Music and, naturally, Amazon shopping. We’ll talk more about software later on.

The 2022 Fire 7 isn’t a recycled 2019 model: it’s genuinely new, with a new button arrangement that sees the power and volume buttons placed together, a USB-C port (instead of microUSB) and – usefully – a headphone jack for traditional wired headphones. You can pair Bluetooth headphones if you want to go wireless, though.

The screen and cameras are unchanged, which is a shame as all are extremely basic quality. The bezel around the screen is more pleasing to the eye as it’s the same width all round. The front-facing camera has been moved from the short side to the long side, meaning you’ll need to hold the tablet in a landscape orientation for video calls, as opposed to portrait on the older model.

Colours have changed, too: instead of Twilight Blue there’s now Denim, and instead of Plum there’s Rose. Sage has been dropped completely: the only other option is Black.

As usual, the base model has 16GB of storage, with roughly 9.5GB available for your apps, games and files. You can pay more for the 32GB model, which has around 25GB of usable storage. It’s possible to add up to 1TB more via a microSD card but from previous experience, it’s best to install apps on the internal storage.

There’s a single speaker on the top-left corner (top being the side with the camera), and it sounds very tinny with no bass. It’s just about passable for watching videos and playing casual games, but not for music.

Build quality is fine: Amazon says the Fire 7 is twice as durable as the 2021 iPad mini. So it’s more likely to survive accidental drops without the screen cracking. If you’re considering buying this for a child, the Kids Edition comes with a bumper case that adds a lot more protection along with a two-year warranty that covers accidental damage and a year’s access to Kids+, Amazon’s subscription service that’s packed with child-friendly videos, games, apps, books and more. But, the Kids Edition does cost twice as much.

It offers no water resistance, so although it’ll probably survive the odd splash of water, it can’t be submersed.

With a 2GHz quad-core processor and 2GB of RAM, the 2022 Fire 7 has more grunt than its predecessor. Not a whole lot more, mind: Amazon says it’s 30% faster which sounds good, but the Fire 7 has always been described as sluggish and the increased firepower doesn’t do a lot to change that.

Scrolling and navigating around Fire OS 8 is a relatively smooth and responsive experience, but you soon begin to notice the lack of pace when you tap on an app. The screen will go grey and an orange circle will spin for a few seconds before it appears. It isn’t a deal-breaker: it’s what you get when you spend $60/£60 on a tablet.

Benchmarks such as Geekbench 5 confirm that the newcomer is roughly 30% quicker, which puts it on a par with the Fire HD 8 that uses the same processor and RAM. With a multi-core score of 515, it’s a way behind budget phones such as the Samsung Galaxy A13 (which scored 585), which we also criticised for being too slow.

Don’t buy the Fire 7 for gaming, unless the games you have in mind are undemanding puzzles, or the endless-runner types such as Jetpack Joyride and other non-3D titles like Among Us. Unfortunately, neither of those is available in Amazon’s Appstore, illustrating the main drawback of opting for an Amazon tablet: the choice of apps is much more limited.

Better examples include Crossy Road and Fruit Ninja, which can be installed easily. (It’s possible to install Android games, and certain Android apps such as the PCMark benchmark we use, on a Fire tablet, but it involves jumping through quite a few hoops.) Roblox is also available, but doesn’t run very smoothly.

Battery life is the real highlight of this new model. In our tests, it lasted almost exactly the 10 hours Amazon claims – up considerably from the 2019 model that lasted around six hours.

Recharging the battery is, unfortunately, very slow. Amazon includes a tiny 5W USB charger which takes slightly over four hours to refill the Fire 7 from empty to full. There’s no fast charging option, and you’ll barely get 20% charge if you have only 30 minutes to charge it from empty.

There’s little new to say: both cameras offer very poor quality compared to even budget smartphones. They have the same resolution as previous Fire 7 tablets and even in good light, you’ll be disappointed (as will your kids) with photos and videos.

In low light, don’t even bother trying to use them.

The front camera is passable for video calls, partly because you’ll be focused on the other people on the call rather than your own video. Usefully, as well as Alexa calling, you can get Zoom, Skype and Facebook Messenger on the Fire 7.

The Fire 7 runs Fire OS 8, which is based on Android 11. That’s already the previous version available on many Android phones, but here it doesn’t really matter.

You wouldn’t know it was Android except for a few similarities such as the way you swipe down from the top to see the shortcut tray and notifications. Compared to the 2019 Fire 7, you do get some minor extra features including more detailed permissions for what apps can and can’t do (such as using the microphone and webcam), and whether they can do things in the background or not (such as accessing your location).

There’s also a ‘proper’ dark mode. Fire OS is dark by default and has offered the choice of dark or light modes before. Now, with official OS support, apps should now follow suit and adopt whichever mode you choose.

As mentioned, there’s no Google Play Store which limits which apps you can (easily) install on a Fire 7. Unlike Amazon Fire TV devices, the official YouTube app is not available for Fire tablets, a constant annoyance for users who have to use Amazon’s web browser to watch via the YouTube website or install one of the unofficial YouTube apps, which are generally not as good as the real thing.

There are lots of popular apps (think Spotify, Netflix), but what you won’t tend to find are ‘service’ apps such as mobile banking and smart home apps for your smart lights, security cameras and others.

This is where Alexa can be helpful as it’s often possible to enable the Alexa skill for such gadgets. But you’ll still need a smartphone to get those devices set up in the first place.

Alexa is hands-free on the Fire 7, though you’ll need to enable the assistant and then enable hands-free mode in the settings as both are disabled by default.

You can also spend the same amount to upgrade to the 32GB model.

These are available in the same colours as the tablet itself, though they’re called Wild Rose and Deep Sea Blue, not Rose and Denim, for some reason. One advantage is that they have a built-in stand for watching videos or following recipes hands-free.

You can read our reviews of the other Amazon Fire tablets for a better idea of how the various models compare. If you’re buying for a child, it’s well worth reading our roundup of the best kids’ tablets.

There are enough upgrades and improvements here to make the Fire 7 well worth the extra $10 / £10 over its predecessor. It’s great to have longer battery life, slightly improved performance and the USB-C port, which makes it so much easier to attach the charging cable.

The tiny price means you’ll have to live with dismal photo and video quality from the cameras, and the low-resolution screen.

For $30 / £30 more, you could instead get the Fire HD 8 that has a bigger, higher resolution screen, double the storage, better sound and even longer battery life, but you’ll still be stuck with the same cameras and the same limitations in terms of app choice.

There aren’t really any comparable Android tablets at this price, especially if you want to stick to known brands such as Samsung. If your budget won’t stretch further than $60 / £60, this is the best tablet you can hope for, but just don’t expect too much.