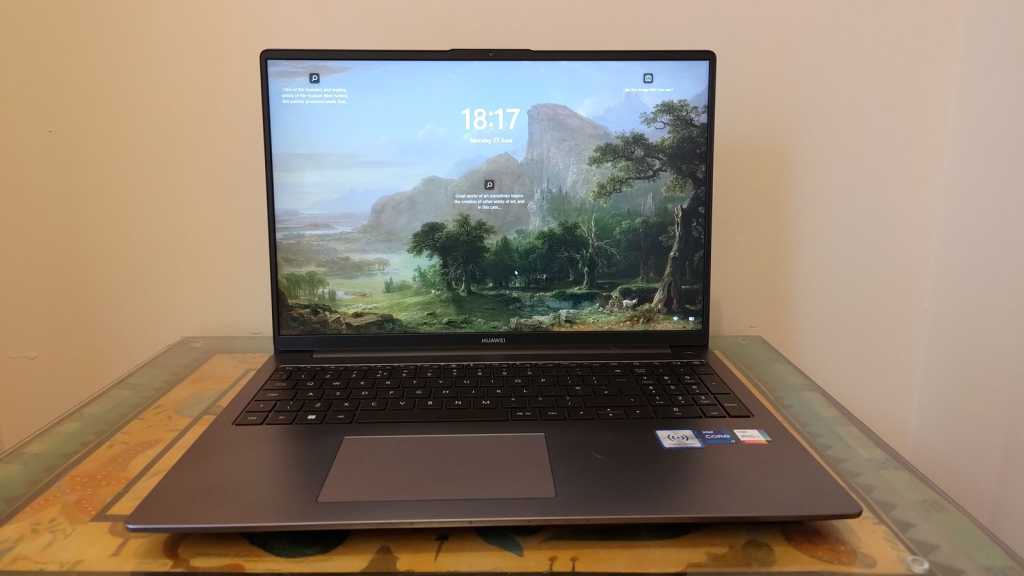 Anyron Copeman / Foundry
At a glance

The second-gen MateBook D 14 is a serious upgrade over the original, with performance and video calling among the areas to benefit. But two key pillars of a great laptop – battery life and display – are things you’ll have to compromise on.

It’s hard to believe, but Huawei released its first ever laptop just six years ago. The company has since established itself as a major player with several new products that have been widely praised. Avoiding the impact of the ongoing US trade ban has been a major contributing factor – all Huawei laptops run a full version of Windows.

In 2021, we saw the latest new addition to Huawei’s laptop lineup – the MateBook D 16. It has a large 16in display, making it one of the biggest PCs Huawei makes. Last year’s original was powered by AMD, but Huawei has switched to Intel silicon for this second generation.

Was it a wise move? And is the new webcam position enough to justify the upgrade? I answer these questions and many more in this full review.

There’s nothing groundbreaking about the MateBook D 16’s design, but big changes were hardly necessary. Huawei has got the sleek, premium aesthetic down to a T, even if comparisons to the 16in MacBook Pro are inevitable.

Space Grey and Mystic Silver colour options do nothing to discourage them. It’d be nice to see other finishes available, but I’m a still big fan of the MateBook D 16’s minimalist aesthetic.

The only interruption is a Huawei logo emblazoned on the back, but this feels much less prominent on a device of this size. It’s highly reflective and shimmers when it catches the light, adding to the device’s premium feel. Impressively, it’s also the only area of the laptop that attracts noticeable fingerprint smudges.

When opening the MateBook D 16 for the first time, its main design upgrade is immediately visible. Huawei has abandoned the webcam built into one of the function keys, returning it back above the display.

Whether you’re an occasional user of the webcam or rely on it for regular video calls, this is a big step forward. However, the one caveat is that you lose a physical privacy shutter of any kind.

The quality of the sensor itself has also been upgraded to 1080p. Having a Full HD camera to call upon meant I didn’t need a separate webcam – it offers impressive detail and accurate colours in good lighting. Things become a bit of a struggle in darker environments, with exposure the main issue, but this can be corrected with separate lighting of your own.

With no separate IR sensor, the MateBook D 16 still doesn’t support Windows Hello face unlock. It means you’ll be relying on the fingerprint sensor built into the power button, although I found this very reliable and enjoyable to use.

One disappointment is the bezel around the outside of the display, which is coated in plastic. This gives it a slightly cheap feeling that you wouldn’t associate with such a premium device, but it’s not a dealbreaker for most people.

At 1.7kg, the MateBook D 16 is relatively lightweight for a 16in laptop, albeit significantly heavier than the LG Gram 16. A thickness of 18.4mm isn’t bad either, and crucially ports haven’t been sacrificed to get there.

Either of the two USB-C ports can be used for charging or fast data transfer. They’re joined by a 3.5mm headphone jack, full-size HDMI port and two USB-A ports – this is rare for a modern laptop. Most people won’t need to worry about attaching adapters or dongles, which I can really appreciate.

The size of the MateBook D 16 means there’s plenty of room for a full-size keyboard and separate number pad. Some people will find this setup useful, but coming from a smaller laptop, this felt awkward at first. However, you do soon get used to it.

Overall, the MateBook D 16’s keyboard delivers a convincing typing experience. Each key is tactile and responsive, although I was expecting slightly more travel. It does mean typing is quieter than your average laptop, though – great if you plan on regularly using it in public.

There’s no webcam within the keyboard anymore, but Huawei has still put the function keys to good use. Standard brightness and volume controls are joined by a Wi-Fi toggle, Calculator shortcut, window resizer and plenty more. Learning what each of these does will save you a lot of time in the long run.

One example is the F3 key, which controls the backlighting of the keys. But I was hoping for more brightness levels, as you only get two here.

The size of the MateBook D 16 means there’s both a large trackpad and plenty of space to rest your palms. I was impressed with the level of control the trackpad provides – it’s very responsive and satisfyingly clicky.

But Huawei has decided to locate it directly under the main keyboard section, making it slightly left of centre. This makes it more annoying to use than the average laptop (if you’re right-handed), but it’s another one of those things you get used to.

Still, there’s no doubting this is a solid display. Colours are rich and vibrant, with that high resolution delivering excellent detail.

Internal testing suggests colour accuracy is good, too. According to the SpyderX Pro, it covers 98% of the sRGB colour gamut and 76% of both AdobeRGB and P3. For most people, this means the MateBook D 16 delivers a great visual experience.

However, brightness is a slight issue. Huawei only advertises a maximum of 300 nits, so my figure of 303 wasn’t far off. That’s still fine for most indoor environments, but you can pretty much forget about using it outside.

There are also two missing features that you will find on other laptop displays. Touchscreens still aren’t universal, but I really missed not having it here. A high refresh rate is much less common, but something higher than 60Hz would’ve been nice.

Most people will be able to manage without both features just fine. But with no OLED and low brightness, you’ll find better laptop screens out there.

In terms of audio, the MateBook D 16 features dual stereo speakers. But they’re downward-firing, meaning sound is being transported away from you. There’s plenty of space for front-facing speakers here, so I can’t understand Huawei’s decision here.

The sound it produces has excellent clarity, avoiding distortion even at high volumes. But it lacks the definition and bass of some rivals, something which is particularly apparent when playing music.

It’s a similar story with the MateBook D 16’s four microphones, but this makes it a solid option for video calls. Voices are clear and crisp, and it does a good job of blocking some of the background noise.

Internals are an area which laptop companies regularly update, but there are big changes on the MateBook D 16. Last year’s original used AMD’s Ryzen 4000 Series, but this version uses Intel’s latest 12th-gen chips instead.

Specifically, it’s the performance-focused Alder Lake-H Series, with a choice between Core i5-12450H and Core i7-12700H. I tested the latter, which pairs it with 16GB of DDR4 RAM – you’re limited to 8GB on the cheaper model.

In general usage, it’s hard not to be impressed by the MateBook D 16. It excels across all my regular tasks, covering web browsing, watching videos, creating documents and managing emails. In fact, you can do all four at the same time without any slowdown of note.

More demanding apps such as Photoshop or Premiere Pro are well within reach, but I’m hesitant to recommend it for gaming. That’s because the MateBook D 16 uses Iris Xe integrated graphics, rather than opting for a discrete GPU.

During the most demanding workloads, that becomes a limiting factor. Indeed, the 3D Mark benchmarking software predicts Fortnite can only run at around 35fps, with lower estimates for the AAA titles such as Battlefield V. If you want a great gaming laptop, look elsewhere.

Nonetheless, the MateBook D 16 still delivers excellent all-round performance that makes it perfect for everyday usage. It also runs very cool and quietly – you won’t hear the fans most of the time.

This solid performance is reflected in the benchmarks below:

You only have one option when it comes to internal storage: a 512GB SSD. This is plenty of space for most people, although power users may miss the option for a 1TB configuration.

Like all 2022 laptops not made by Apple, the MateBook D 16 runs Windows 11 Home out of the box. Huawei’s Android skin has been well documented in the past, but it’s influence here is much more limited.

In fact, the only real indicators of this being a Huawei machine are two pre-installed apps. ‘Link Now’ is an alternative to Microsoft’s ‘Phone Link’ companion app, while ‘PC Manager’ offers several tools to help connect all your devices.

However, this only really applies if you also own a Huawei phone, watch or tablet. Should that not be the case, both apps are easy to ignore.

The MateBook D 16 features a 60Wh battery. That’s a slight upgrade over the 56Wh cell on the AMD model, but I was hoping for more. Huawei doesn’t make any specific claims regarding how long it’ll last, which is perhaps telling.

In our test looping a 720p video, the MateBook D 16 lasted a total of 8 hours and 49 minutes. That’s below average, and you’ll struggle to get a full day’s usage without needing to plug it in. This test is set at a relatively low 120 nits of brightness, while a range of everyday tasks deplete the battery much more quickly.

Turning on battery saver mode and ensuring the screen is off when not in use will help, but the gains will be marginal. Unfortunately, you simply can’t rely on the MateBook D 16 to last for more than a few hours before reaching for the charger.

Things are more positive when you do, though. The 65W charger in the box will get you up to 23% in 15 minutes, then 44% by the half-hour mark. Within two hours, the battery was fully charged.

That pricing puts it in direct competition with former sub-brand Honor and its MagicBook Pro. LG’s Gram 16 is another option, but it’s also worth considering laptops of other sizes. Huawei’s own MateBook X Pro isn’t much smaller at 14in, while the Surface Laptop 4 is available with a 13.5in or 15in display. Plenty more are available in our best laptop chart.

But despite its shortcomings, the MateBook D 16 still offers impressive value for money.

The original MateBook D 16 from 2021 was already an impressive laptop, and this follow-up improves the experience in two key areas.

Intel’s 12th-gen CPUs aren’t necessarily better than AMD Ryzen 6000 Series, but they’re a clear upgrade over the Ryzen 4000 chips in the original. Performance is excellent as a result, but without a discrete GPU it’s still not a gaming machine.

Huawei has also returned the webcam to its rightful place above the display, upgrading it to a crisp 1080p sensor in the process. Just make sure you’re in a well-lit environment to make the most of it.

Other highlights include an excellent port selection, great fingerprint sensor and premium build, but it’s not all good news. Battery life is a real concern (despite decent charging speeds), while I was hoping for more from the display and keyboard.

But unless you spend hours away from the charger, none of these are dealbreakers for most people. The MateBook D 16 still delivers a compelling case to be your next laptop – provided you specifically want a 16in device.