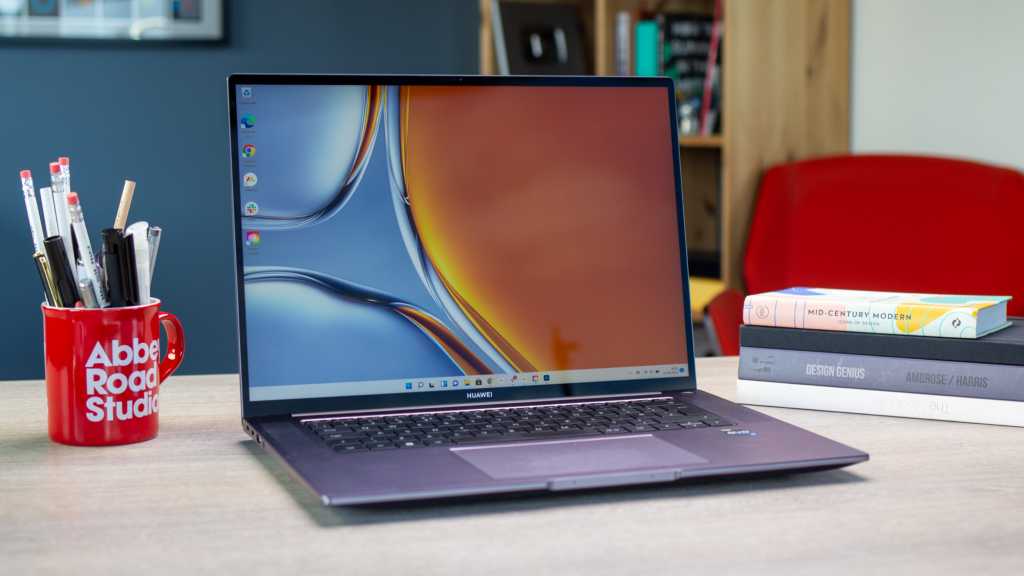 The MateBook 16s is an impressive improvement from the already excellent MateBook 16. A switch to Intel delivers promising performance, and touchscreen support and a new 1080p webcam are winners too. But can you live without a dedicated GPU?

Do you really need a 16in laptop? For most people the answer is a resounding no. But for a select few a portable powerhouse with a big screen is a godsend – and Huawei clearly agrees, choosing to launch two of them at the same time to the European market.

The MateBook 16s is the more premium of the pair (though the affordable MateBook D16 is no slouch, to be fair), targeting graphic designers, video editors, and other users with heavy professional or creative workloads.

The big caveat is that there’s no option to grab the 16s with a discrete GPU, and Huawei is instead banking on the combination of Intel’s powerful 12th-gen H-series CPUs, Thunderbolt 4 support, and a high-quality 2.5K display to persuade creatives that the MateBook 16s is up to the task.

Huawei has settled comfortably into a stable design language for its MateBook laptops, and the 16s does little to upset the apple cart.

Like most of the company’s devices this laptop only comes in Space Grey, and the restrained design is simple and professional. At worst you might call it a little dull, but this certainly isn’t an unattractive piece of kit, from the clean, symmetric lines of the body to the slim bezel around the expansive display.

This is a 16in laptop, and necessarily that means it’s big. Huawei has done its best to minimise that, and did keep the laptop svelte enough to earn Intel Evo certification. Still, it’s 17.8mm thick and weighs 1.99kg, which isn’t quite ultrabook territory.

This is about as portable as a laptop this size gets – the ludicrously light LG Gram 16 is the only notable exception, and the MacBook Pro 16 is heavier – but you’ll definitely notice the weight when you slide it into your backpack.

The display is one of the MateBook 16s’s strengths, and a key part of Huawei’s pitch that the laptop can deliver for creatives.

The size is one thing, but it also boasts a high 2.5K resolution (2520×1680, to be precise) in the increasingly popular 3:2 aspect ratio. This boxier shape gives you extra vertical screen estate to work with, and is optimised for productivity, allowing you to fit more of a document on-screen at once or edit photos and videos with less letterboxing – though the inverse is true for watching content, where you’ll almost always have black bars above and below whatever you’re streaming.

Colour calibration is impressive, though not quite the best around. Testing with a SpyderX Elite, I recorded coverage of 96% of the sRGB gamut, 73% of AdobeRGB, and 72% of DCI-P3. The panel is let down a little when it comes to brightness though, peaking at 330 nits in my tests, which will be a particular limitation when it comes to HDR.

The bezel around the display is slim for a laptop this size – 7.3mm at the thickest point – with a 90% screen-to-body ratio. That’s not too slim to squeeze in a webcam though – in this case a 2Mp, 1080p camera. That’s a definite edge in a market still dominated by 720p sensors, making this one of the better laptops around for video calls and the like.

One final upgrade is the fact that the display is a 10-point touchscreen – an increasingly popular option for Windows laptops that gives you a few extra ways to navigate the OS.

There’s an open debate as to how much the speakers on a laptop really matter, but Huawei has clearly invested here. You certainly can’t miss them, with two large grilles that run down either side of the keyboard, but the sound is impressive enough to justify their prominence. Music comes through punchy but crisp, and there’s enough clarity to pull out dialogue in films and TV – and even some halfway decent bass output.

One consequence of the two large speakers is that while you do get a full-size keyboard in the MateBook 16s, you don’t get a dedicated numpad along the side, as in some rivals – including the new MateBook D16.

Still, the keyboard is otherwise impressive. The 1.5mm key travel is deeper than in many laptops, and combined with what Huawei calls ‘soft-landing’ tech the result is excellent. Huawei has long rivalled Dell at the top end of the laptop keyboard experience, and this is no exception – there’s really nothing I can find to complain about.

To the top-right of the keyboard you’ll also find a Huawei staple: a power button with a built-in fingerprint scanner. So far this has worked smoothly and reliably.

The large glass trackpad is also a winner. Sadly it doesn’t feature the haptic tech or right-up-to-the-edge design you’ll find on Huawei’s premium MateBook X models, but it’s large, smooth, and comfortable to use.

Finally, ports. You’d expect plenty on a 16in device, and for the most part I think Huawei has delivered. Two USB-C ports – one of which includes Thunderbolt 4 – are found on the left, alongside HDMI 2.0 and a 3.5mm headphone/mic jack. On the other side you’ll find two USB-A 3.2 ports.

Some users will likely miss an Ethernet connection, though the bigger omission is the lack of any SD card slot, meaning many creatives will still need to carry a dongle round with them despite the laptop’s size. More than one Thunderbolt 4 port wouldn’t go amiss either, but for most this setup should suffice.

Huawei is the latest manufacturer to put its faith in Intel’s Iris Xe graphics processing, shipping the MateBook 16s without any discrete GPU option and instead relying on Intel to deliver the goods.

To back that bet, Huawei is using Intel’s most powerful laptop chips right now: the 12th-gen H-series CPUs, which are bigger, beefier, and higher wattage than most other laptop chips.

I’ve been testing an i7 model with 1TB of storage space, and from a performance perspective I have little to complain about. My day-to-day needs are mostly simple – a lot of work in Chrome and a bit of relatively light Photoshop and Lightroom – and predictably the 16s has breezed through the lot.

In benchmarks, it’s no surprise to see strong performance in the CPU-focussed Geekbench 5, though the more generalised PCMark 10 test sees it drop back a little, even lagging behind last year’s AMD Ryzen-powered MateBook 16.

If Huawei is serious about this performing as a professional creative device then graphical output is the real test. Despite the lack of a true GPU, the 16s holds its own in the 3DMark Night Raid test, showing once again that with Iris Xe, Intel means business. It’s predictably trashed by gaming devices like the RTX 3050-enabled Asus ROG Flow Z13, but beats almost every other integrated option and matches some less powerful GPUs. And that’s just the i7 model – the i9 would no doubt push things even further.

As for connectivity, the 16s supports Wi-Fi 6E and Bluetooth 5.2. There’s no option to add a SIM card for 5G, but that shouldn’t come as any surprise.

Huawei has equipped the MateBook 16s with a generous 84Wh battery, though between the big display and the powerful processor, it still runs down pretty fast. It lasted for about 12 hours of constant video playback in our battery test – a pretty average score.

That means there’s enough power here for a working day, but only if you’re not doing anything too intensive – Huawei’s professional target market will likely still need to stay close to a charger.

Fortunately that’s not too painful thanks to the combination of fast charging and compact USB-C power adapters.

There is a little variation here though. If you buy the i5 or i7 model, it will ship with a 90W adapter, while the more powerful i9 version in turn comes with a faster 135W charger. They’re about the same size though, and with USB-C support will double as chargers for your phone, laptop, and other tech so that you don’t need to carry multiple leads round.

My i7 model shipped with the 90W charger, which was able to restore 43% of the laptop’s battery in just half an hour – impressively fast for a laptop, and a welcome balance to the average battery life.

If you follow the tech world at all then you may know that Huawei has had problems in the phone space, where its access to Google services has been limited, in turn driving it to adopt its own rival software to Android: Harmony OS.

The good news is that none of that applies here. The MateBook 16s ships with Windows 11, and includes full support for everything you’d expect – Microsoft, Google, and otherwise. In essence, this runs just like any other Windows device.

The only difference in fact is that Huawei adds a little extra on top for anyone who also owns other Huawei tech – especially phones, tablets, and monitors.

You can quickly pair a Huawei phone to the MateBook to share the screen or send files, connect to a MatePad tablet to use it as a secondary screen or drawing pad, or wirelessly expand your laptop display onto a MateView monitor.

This is all surprisingly seamless, and Apple is really the only company that can match Huawei for ecosystem support right now. Of course, that only helps if you own other Huawei tech – or are open to buying some in the future – but it does unlock an extra edge if that’s you.

There are offers for early birds though. Pre-orders for the i7 version open today, and will net you a free MateView monitor – worth £599. If you miss that, purchases between 13 July and 23 August still net the £349 MateView GT 27 monitor.

If the 16s is a little steep for you, the new MateBook D16 offers the same H-series i7 chip from £999, dropping to just £749 if you don’t mind an i5. Last year’s MateBook 16 is also a little more affordable, but will have older silicon, a worse webcam, and no touchscreen.

For more options, check out our overall ranking of the best laptops.

The MateBook 16s certainly won’t be for everyone, but it’s not trying to be.

Although Huawei has tried its best to keep things trim, most people don’t need a laptop this big or bulky, and will be better off with smaller alternatives.

For those who need the extra screen space, the 3:2 display here will be a big part of the 16s’s draw. It’s expansive, well proportioned, and carefully colour-calibrated, and is certainly one of the biggest and best displays available at the price.

CPU performance is also exceptional thanks to Intel’s 12th-gen H-series chips, making this a powerful performer. The lack of a dedicated GPU option will undeniably limit the appeal to serious video editors or anyone hoping to use this to game, but don’t write off the integrated Iris Xe graphics, which provide plenty of oomph for office work and even photo editing and graphic design.

If you want a 4K OLED panel or an Nvidia RTX GPU then the MateBook 16s won’t be for you – but then nothing at this price point will be. But with plenty of power in a relatively compact chassis, and all at a competitive price, this will deliver plenty for anyone who’s slightly less demanding.