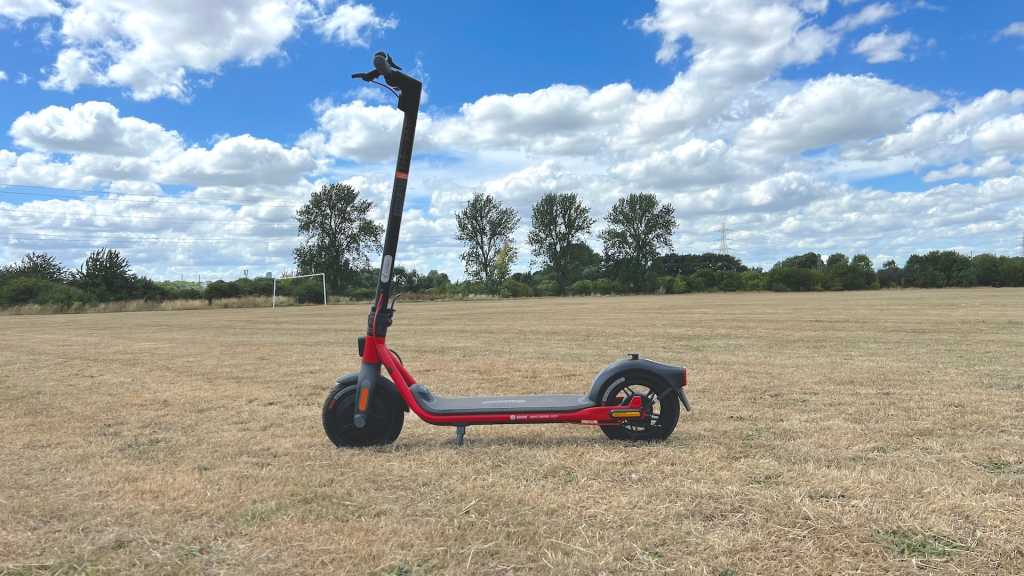 The Ninebot KickScooter D38E ticks most boxes, offering a powerful 350W motor, decent range and even high-end features like app compatibility and IPX5 water resistance at a competitive price. It doesn’t have all the bells and whistles of high-end alternatives, but it’ll get you from A to B comfortably.

In a market filled with generic white label electric scooters, Ninebot looks to introduce something with style and substance. That comes in the form of the Ninebot KickScooter D38E, one of the latest entries to the company’s sprawling collection of electric scooters, e-bikes and other electric-powered micro-mobility options.

Offering competitive specs including a 350W motor, a 23.6-mile range, water resistance and a companion app for iOS and Android, the Ninebot KickScooter D38E could give popular Xiaomi scooters a run for their money.

While the majority of electric scooters are fairly bland in design, sporting the same overall look and grey and black colour scheme, the Ninebot KickScooter D38E bucks that trend.

Sporting an eye-catching design with bright red accents that run down either side of the footboard, it’s safe to say that the D38E stands out from the crowd. That’s complemented by matching red brake cables and subtle (but stylish) Ninebot branding that makes the scooter look like a premium bit of kit.

Of course, there’s much more to it than a flashy colour scheme, but it’s nice to see.

Broadly speaking, the Ninebot D38E sports a standard electric scooter design, with wide handlebars, a centrally-embedded display, a large footboard and the ability to fold down to a more compact form for storage and transport.

It’s easier than some to fold down, with a single release mechanism on the stem allowing it to go from standing to folded in a few seconds – ideal if you want to quickly change forms of transport. It clips into place by an attachment on the rear wheel cover to make it easier to carry, and it’s just as easy to unlatch it too.

It also helps that, despite some fairly beefy specs, the Ninebot DS38E weighs in at a relatively svelte 16.3kg. It’s not quite as lightweight as the likes of the 15kg Mycle Cruiser Pro, but it’s easy enough to get in and out of the house without a struggle in my experience. It’s certainly an improvement on the 28kg Inokim Ox Super, that’s for sure!

The footboard isn’t the widest around at 180mm wide, but there’s enough space to get comfortable when riding – at least it was for me and my size 11s. The grippy rubber finish, complete with Ninebot branding, helps keep you steady on the board during tight turns and wet conditions.

That’s also helped by the official IPX5 water resistance – a relative rarity at this price point – which should keep the scooter going in light rain, though I’d recommend avoiding puddles and stormy weather to be on the safe side.

Like the footboard, the handlebars are fairly narrow at 480mm wide, helping to keep a sleek profile, but that’s still wide enough to ride comfortably. There’s space for a throttle on the right, as well as a centrally-embedded display to show stats including speed, battery life and the current gear, while the left houses the single brake control and a bell.

There’s a front-facing 3W LED light that’s bright enough to illuminate the road ahead in dark conditions, and its placement at the bottom of the stem means it does a better job than alternatives with LEDs close to the handlebar, illuminating more of the road immediately ahead of the front wheel.

Unlike most electric scooters, there’s a companion app available that adds extra functionality. The Ninebot app for iOS and Android not only provides stats on how far you’ve travelled, estimated range, remaining battery power and the ability to adjust the energy recovery from regenerative braking, but it allows you to remotely lock the scooter too.

While it won’t be a deterrent for a determined thief, the locking system will apply the e-brake and make a beeping sound whenever movement is detected, ensuring they can’t simply ride off into the sunset with your scooter.

With a 350W motor at its heart, the Ninebot D38E is in-line with similarly priced alternatives like the Xiaomi Mi Scooter 2 Pro and Turboant X7 Pro, with great all-round performance that makes getting around an absolute treat.

As you might expect, there are three speed levels to choose from – Eco, Standard and Sport – with an additional walking mode available via the Ninebot app to help keep you at the same pace as someone walking by.

Each level differs in terms of overall speed and acceleration, with the Eco offering the most eco-friendly option and the Speed mode getting you from A to B as fast as possible.

It’s most enjoyable in its Sport mode, with a top speed at the scooter’s maximum 15.5mph (though it’s measured in km/h on the display with no way to change it) and the ability to tackle 20-degree inclines with ease.

The 350W motor means it’s faster off the mark than the likes of the Mycle Cruiser Pro and its 300W motor, making it a great option for the stop-start of city life.

The 10in air-filled wheels are among the biggest around in the electric scooter market, and this means it’s easier to skirt over dips, bumps and cracks in the road – and though the scooter isn’t designed for it, the big wheels mean it’s surprisingly adept at off-road use too.

The inclusion of air-filled tyres isn’t quite as convenient as their solid counterparts, but it does provide a smoother ride – though you’ll still feel bumps and cracks on particularly unkept surfaces, lacking any proper suspension.

No matter how fast you’re travelling, the combination of an electronic front brake and rear drum brake means you’ll come to a stop very quickly – in fact, the brakes are so sensitive that it took me a bit of getting used to during testing.

The inclusion of a single brake control on the handlebar is a little disappointing, providing less control when emergency braking at high speeds, but it’s commonplace among mid-range electric scooters.

Despite the relatively lightweight dimensions of the Ninebot D38E, it has a range of up to 23.6 miles (38km) delivered by a 367Wh battery hidden within its body.

Of course, it should go without saying that battery life varies greatly when it comes to electric scooters, with performance depending on factors including rider weight, speed, incline and even the ambient temperature.

It’s likely that Ninebot got that result from riding on a flat surface in the slowest gear, and that’s not true to life.

With that in mind, the Ninebot D38E won’t last the full 23.6 miles for most people. But, in my experience, I’ve found that I can comfortably squeeze 10-12 miles at full speed before requiring a charge. That’s fine for quick trips and even short commutes, but for anything longer, you’d be better off looking at the Ninebot Max G30.

Charge time isn’t the fastest around, taking around 6.5 hours to fully charge from flat via a port hidden in the base of the stem, but the scooter will display the current charge while charging to give you an idea of how long you’ve got left.

The Ninebot D38E comes in at a rather competitive £459 (around $565) in the UK, making it cheaper than the likes of the popular Xiaomi Mi Scooter 2 Pro while matching – or besting – its specs. It’s available from the Segway Store in the UK and Europe, as well as retailers like Currys in the UK.

The Ninebot D38E isn’t available in the US at the time of writing, but I’ll update this section in future if that changes.

To see how the Ninebot D38E compares to the competition, take a look at our selection of the best electric scooters.

The Ninebot D38E is a solid mid-range all-rounder that boasts great performance, decent range and a unique style among a sea of generic electric scooters on the market in 2022.

Its slim dimensions and relatively lightweight nature make it one of the easier electric scooters to carry around when folded, and small details like 10in air-filled tyres and LED headlight placement really perfect the experience on offer.

It won’t do long-distance rides, and the lack of dedicated suspension means the ride can get bumpy at times, but it’s an ideal option for short trips and general city life.