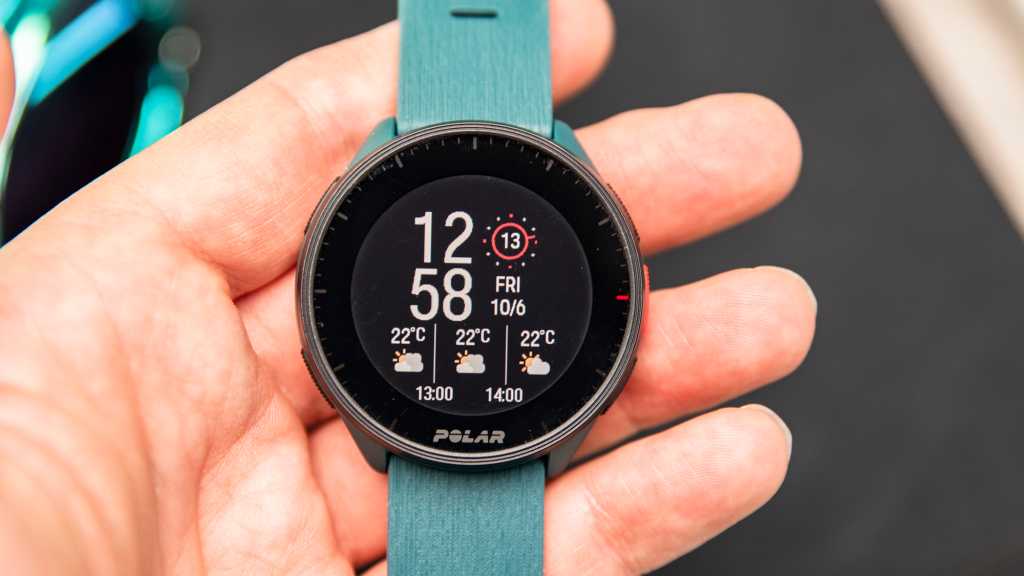 The Polar Pacer refines Polar’s vision of a running watch to its purest form. It’s an excellent device that skimps on smartwatch features to hit an attractive price point.

If you want a running watch that lasts several days on a charge, tracks your workouts effortlessly, spits out insightful data, and won’t bug you with notifications, the Polar Pacer is it.

That happens to be the point of the Pacer, which is cheaper and less advanced than the Pacer Pro released at the same time. That’s OK in my book though – most runners aren’t pros, including me. The regular Pacer is more than enough running watch for most people.

Polar’s watches all look quite similar. The Pacer is more lightweight than past models which is welcome, with the upside that most of the tech from older, more expensive watches has trickled down to this one at a cheaper price.

It’s a quite plain design that I think looks nicely understated in the teal colour I have been using, and it’s also available in standard black, as well as white and a pastel purple. The casing and strap are these colours, while the bezel around the circular watch face and screen remain black whichever you pick.

The watch has a very light plastic construction, much daintier than older Polar devices. It means it’s pleasant to wear all day long and very unobtrusive, not sitting too far off the wrist but still packing in full GPS connectivity and a heart rate sensor.

With full IP68 water and dust resistance you can also not worry about taking the Pacer off when it’s pouring with rain or if you hop in the shower.

The Polar Pacer doesn’t feel top tier premium, but I also don’t think Polar is concerned about that for the asking price of £169.50 (perhaps the £259 Pacer Pro, which I haven’t tested, fills that role).

The best thing about the Pacer’s display is how readable it is in direct sunlight. The downside to most digital displays on smartwatches and phones is they can be very reflective and become washed out when the sun is shining on them.

Not so with the Pacer, whose 1.2in 240 x 240 screen laughs in the face of the sun’s rays. It’s actually clearer when in direct light – a big win. This is thanks to the memory-in-pixel (MIP) tech Polar uses, which is more power efficient than an LCD or OLED as well as being far more readable in sunlight. This means it’s less readable in low light, but the backlight here makes up for that.

The screen on the Pacer is not touchscreen but simple button controls on a fitness watch that doesn’t run third party apps is fine in my book. You don’t need to poke about on a display this small, and the whole point of the Pacer is it stays out your way until you need it.

There’s no speaker or mic on the watch so you can’t talk into it Star Trek-style for calls.

The software on the Polar Pacer is quite simple, mostly to its advantage but occasionally to its detriment.

I like how the time is always on the home screen and how the up and down buttons on the right side cycle through various data sets: date, daily activity goal percentage, how active you’ve been recently, heart rate, how long ago your last training session was, ‘nightly recharge’ sleep tracking information, workout recommendations, weather, how long you worked out last week, and music controls (if switched on in settings).

This is all useful but cycling through isn’t necessarily the best way to view all the data and I often forgot it was there. It’s all much easier to view on the Polar Flow app for iOS or Android, which syncs comprehensively with the watch, but only when the app is open, and when you press and hold the lower left button. Many smartwatches can update their companion apps automatically and this really should be the case for Polar.

The most annoying thing I came across was when paired to an Android phone. If you have enabled notifications but haven’t separately enabled music controls, the watch vibrates and prompts you with a notification every time you play or pause audio such as a music track on Spotify or Tidal. It is infuriating and pointless because you can’t even interact with the notification to control the audio.

I discovered if turned on music controls via the app I was then was able to play, pause, skip track, and adjust volume as long as I was on one of the rotating home screen faces. I get that Polar is allowing people to turn notifications and music controls off to keep the Pacer less distracting, but the software doesn’t explain this at all, and I only got the watch set up how I wanted through tricky trial and error.

You can also choose whether notifications, if on, ping you during a workout. But it’s difficult to select which apps you’d like to notify you – you can block them, but they only show up as options if and after the app has sent a notification to the watch from your phone. This is much less advanced than other watches where you can already pick which apps should ping you, rather than having to manually opt out after they have already done so.

The Polar Pacer is absolutely stuffed with fitness features. It’s so good at what it sets out to do that I found it quite easy to forgive its plainness and some of the annoying quirks I’ve described.

Running tracking is dead simple with the built in GPS, Glonass, Galieo, and QZSS satellite support. Simply select ‘run’ from the workout list and the signal connects quickly, and then you’re a button push away from starting the recording. You can cycle through key metrics, which I find well laid out over a few screens. The main one, with heart rate, pace, duration, and distance is excellent.

There’s a new walking test feature for the Pacer series that makes you get your heart rate up then measures your aerobic fitness by ordering you on a brisk walk to maintain a high rate. The watch gives on screen instructions throughout and vibrates to let you know when your rate drops below the threshold. You also have support for cycling, indoor cycling, swimming, triathlon, HIIT sessions, treadmill running strength training, hiking, and mountain biking.

Polar’s tracking has always been good so it’s great to see it adding new features. The ‘running index’ the app creates for you after each run collates your heart rate and speed to measure performance and progression. At a street party, it was telling me to ‘get a better posture’, which I found sassy. It worked though – I thought about this a lot more on my next run.

Accurate route tracking using the built in GPS lets you leave your phone at home, but there’s no option to load music directly onto the watch and listen with headphones so if you want music you’ll still need to bring your blower. I also missed the automatic workout detection found on other watches, but given the Pacer is an intentional runner’s watch I didn’t ever forget to record a run.

You can also set ‘fueling’ reminders directly on the watch to remind you to carb load and the ‘serene’ function mimics Apple Watch’s breathe app to get you to take a moment to relax and concentrate on breathing.

Sleep tracking measures your slumber and lobs the data into your recovery stats too – wear the Pacer all day every day while frequently exercising and you’ll soon build up an intricate picture of your health.

So intricate in fact, that the well-featured Polar Flow app is actually quite overwhelming. There’s so much data to look at and it’s all hidden in unintuitive menus. Once you get used to it you should be fine but it took me a few days to get my head around it, and it’s not the first time I’ve reviewed a Polar device.

Workouts are easiest found in the calendar tab, where a full run down of stats reveals just how much you pushed yourself. Heart rate, calories burned, pace, ascent and descent, altitude, cadence, pace per kilometre and a map of your route are standard fare on running watches, but Polar has the basics nailed and presents them well.

Swimming tracking is no problem thanks to 50 metre water resistance, and the watch also lets you link your Polar account up to third party social fitness services such as Strava, Adidas Running, and Nike Run Club to pull data across to whichever you use.

Polar says it has put an improved CPU in the Pacer and it shows, although my last dalliance with a Polar watch was in 2019. The processor doesn’t habve to drive a mini-computer like the Apple Watch though, and is only 200MHz. The watch has only 5MB RAM and 32MB storage, but that’s no bother for its functionality.

Menus are snappy to respond via the physical buttons, and GPS locks on incredibly quickly outdoors.

If on, notifications come through instantly, and syncing works well though it’s still frustrating that you must do this manually by opening the Flow app and then pressing holding the lower left button. Perhaps it’s a battery-saving thing, only drawing the power needed to sync via Bluetooth when you actually want to update your stats on your phone.

The Pacer doesn’t have Wi-Fi (it doesn’t need it) but nor does it have NFC for mobile payments, which is a little more disappointing.

Battery life is excellent, with a promised 35 hours with full GPS and heart rate tracking on bearing true from the 256mAh cell. I could go for about 5 days without charging but if exercising every day the battery will obviously take a hit. Power save mode offers 100 hours, but with a very stripped back experience.

The charger is a proprietary USB-A cable with two magnetic numbs on the other end that clip to the back of the watch. Don’t lose it!

You can buy it globally direct from Polar.

Garmin’s comparable Forerunner 55 undercuts it in the UK at £149.99 but it is a similar beast to the Pacer. If you want more smartwatch functionality than the pure fitness of Polar, then the Apple Watch Series 7 or Samsung Galaxy Watch 4 will be more your thing but they start at a lofty £369/€429/$399 and £249/€269/$249 respectively.

There is about a week-long learning curve to get used to the mobile app and button input but the Polar Pacer rewards with focused and accurate fitness tracking.

If you are trying to get into running or even if you are already hitting the trails the Pacer will prove an excellent addition to your kit with strong battery life, a superbly readable display, lightweight construction, and the smarts to show you how you are performing and to help you improve – all for under £200/€200/$200.