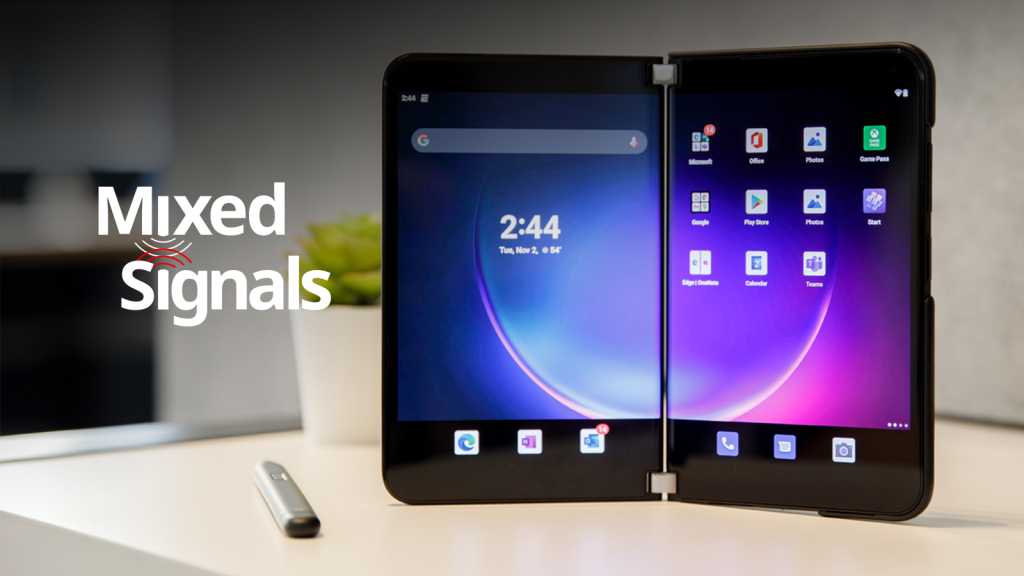 Take one look at the Surface range in 2022 and you’ll notice a clear outlier. Every PC in the lineup runs Windows 10 or 11, with one exception: the Surface Duo 2. Both generations of the Duo run Android, after Microsoft returned to phones for the first time since Windows Phone’s demise.

It’s an obvious choice for any new handset that comes to market, with Android the only credible alternative to Apple’s iOS. But it could be argued that the Surface Duo isn’t really a smartphone at all. Microsoft has been reluctant to label it as such, preferring to promote its versatility and multitasking abilities instead.

Realistically, most people who buy the Surface Duo won’t be ditching their regular smartphone – at least not completely. A simple slab of glass just works better in some scenarios, whether it’s making a call without headphones, texting or snapping a quick photo.

Rival foldables such as Samsung’s Galaxy Z Fold 3 and the Oppo Find N get around these issues with a separate external display, but that’s missing from the Duo. Fitting a SIM card tray to a device doesn’t make it a phone, as several recent portable PCs have proven. Many of these run Windows 11, something I believe the Duo would benefit hugely from.

Think about it. Microsoft is investing heavily in the development of Windows 11, which includes optimising it for a range of different form factors. At the same time, the company delivers software updates to the Duo 2 every month, a device which accounts for a tiny fraction of the firm’s total revenue.

Alongside a price drop, these updates have transformed it from buggy mess to worthwhile purchase, but I can’t help feeling that time would have been better spent doing what developer Gustave Monce has been busy with.

For months, Monce has been documenting his project to get Windows 11 optimised for the Duo. This is an unofficial project and not supported by Microsoft, but seeing Windows 11 running on the Surface Duo, makes the feeling that it shouldn’t be limited to Android that much stronger.

You can even download the latest version of the project and try it on your own Surface Duo, but be warned: it’s likely to be buggy and some features may not work properly.

Of course, Microsoft lending a hand to development would significantly accelerate the process. It would be quite something if it did, but it’s great to see people putting time and effort into things like this.

Objectively, Windows 11 on the Surface Duo makes a lot of sense. It already has extensive split-screen multitasking options, while touch input has taken a big step forward in recent updates. By the time the 23H2 update arrives next year, Windows 11 could be just as suited for touch as it is mouse or trackpad. That’s something that couldn’t be said about Windows 10.

If Microsoft really wants the Surface Duo to be a powerful computer in your pocket, it needs to run the full desktop versions of some apps. The Android equivalents of Word, Photoshop and Zoom just don’t cut it, so using Windows 11 is the obvious alternative.

Admittedly, dual 5.8in displays aren’t what most people would choose for a ‘productivity’ device, with the cancelled Surface Neo arguably a better fit in that regard. Its 9in displays would’ve provided a total screen real estate of 13.1in – similar to many traditional laptops.

But unless Microsoft resurrects that device or launches a bigger version of the Duo, the Surface Duo 3 running Windows 11 could be a hit.

We discussed this in episode 119 of Fast Charge, our weekly podcast, and you can watch it below: