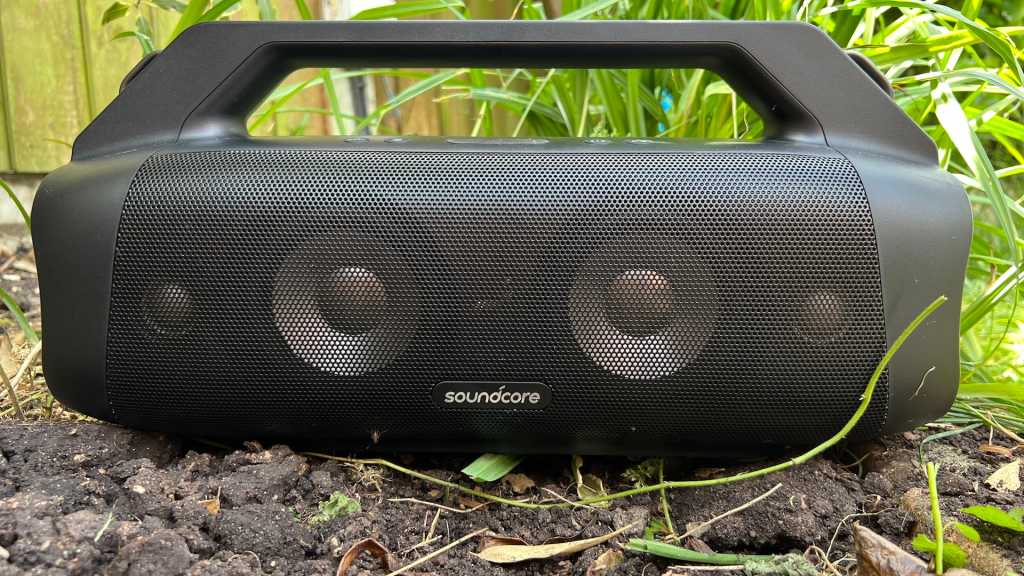 Lewis Painter / Foundry
At a glance

The Soundcore Motion Boom Plus is an impressive outdoor speaker with great battery life and impressive sound – just be ready to put up with its large build and relative heft.

As Spring turns into Summer, we begin to venture outdoors more and more. Whether it’s a walk in the park or a trip to the beach with friends, we’re all spending more time outdoors as temperatures rise and the sun shines.

But what about music? Sure, you can use small portable Bluetooth speakers to provide background music, but what about for true beach parties? That’s where the Soundcore Motion Boom Plus comes in.

Sporting a rugged design, impressive IP67 water and dust resistance, the ability to float in water and 80W of booming audio power, the Soundcore Motion Boom Plus is built for the outdoors.

The Soundcore Motion Boom Plus is an outdoor speaker, and that’s evident from even a quick glance.

It’s a bigger speaker than most alternatives, measuring in at a large 388 x 140 x 195mm. Though that’s slightly smaller than its standard Motion Boom sibling, it frankly dwarves standard Bluetooth speakers like the 73 x 184mm UE Boom 3.

As you’d expect, large dimensions come with heft, and the Soundcore Motion Boom Plus is certainly not lightweight at 2.4kg, but the inclusion of a built-in handle makes it easier to lug around.

There’s also a detachable strap included, allowing you to hang the speaker over your shoulder and listen to your favourite tunes as you explore the great outdoors. These are great options that negate the overall weight, but it’s not as lightweight as truly portable alternatives.

In fact, the waterproofing rating suggests it’ll survive for up to 30 minutes in water, and Soundcore has specifically designed the speaker to be buoyant, meaning it’ll float if it falls in a swimming pool or the sea.

There are a handful of controls beneath the handle of the speaker, allowing you to adjust playback without the need for the connected smartphone, and it’s also where the various ports are housed.

There’s the USB-C port, used for charging the speaker itself, but there’s also a USB-A port for charging other devices and a 3.5mm headphone port for playback from devices – like TVs and older tech – that don’t support Bluetooth.

Bluetooth is very much the main way to connect to the speaker though, with Bluetooth 5.3 connectivity for wireless playback and support for Soundcore’s PartyCast 2.0 tech, allowing you to sync various Soundcore speakers for true stereo playback.

The latter isn’t something I was able to test during my review with only a single sample, but it should be great for larger gatherings.

Like most premium speakers, the Motion Boom Plus plays well with the Soundcore companion app for iOS and Android. It’s not only where you update the firmware to get access to new features, but it offers an EQ system with four presets and a custom mode to adjust music playback to your personal taste.

It’s not unique, but it’s nice to see nonetheless.

If there’s one thing to say about the Soundcore Motion Boom Plus, it’s that it’s loud. Seriously.

That’s no surprise when you consider the speaker array below the speaker’s hard shell, sporting two 30W woofers, two 10W tweeters and two passive radiators for a combined 80W of booming sound.

It’s not quite as loud as the UE Hyperboom, but considering that’s over double the price of Soundcore’s speaker, that’s just fine.

Crucially, it’s not just about sheer volume; the Motion Boom Plus sounds impressive, even at high volumes where many competitors begin to distort.

That’s down to a combination of the use of titanium drivers that improve treble and Soundcore’s proprietary BassUp tech that enhances the bass.

With that all being said, it should come as no surprise that the Soundcore Motion Boom Plus is a capable beast in the audio department, with powerful bass that doesn’t drown out the mids or highs, and the impressive volume means it sounds just as good outdoors as it does indoors.

The bass of Billie Eilish’s You Should See Me in a Crown really hits, with deep powerful tones, but it’s also bright and clear in acoustic tracks like Over the Rainbow, offering the best of both worlds.

Of course, if the tuning isn’t to your taste, you’ve always got the option of using one of the four custom presets on the Soundcore app, or if you know your stuff, there’s also a custom EQ to play with.

I was happy with the default Soundcore Signature preset, but the Voice, Treble Boost and Balanced will be to the taste of some.

Where the Soundcore Motion Boom Plus really excels is in the battery department, with a whopping 13,400mAh battery within – around double that of the largest capacity smartphones in 2022.

As you might expect from such a high capacity, the speaker has the potential to operate for around 20 hours before needing a top-up, though exact playtime depends on factors like overall volume.

Still, that’s longer than competing speakers including the 15hr UE Boom 3 and the 12-hour JBL Flip 6, both popular options for outdoor use, though it falls just behind the 24 hours of the UE Hyperboom.

In reality, 20 hours is more than enough for most outdoor shenanigans, leaving the extra juice to top up tech like your smartphone via the USB-A port, or simply be ready to go the next time without a supplementary charge.

Though the competition is more portable than the Motion Boom Plus, it offers better audio performance and longer battery life too, so there’s a trade-off to be had.

If you’re tempted, you can buy the Soundcore Motion Boom Plus from Soundcore directly, along with retailers like Amazon in the UK and US.

The Soundcore Motion Boom Plus is a great speaker for the great outdoors, sporting a rugged design that’s not only water and dust resistant but completely buoyant, and a handy strap allows you to throw it over your shoulder on longer trips.

It’s not quite as portable as some alternatives with a large, rugged build and a weight of 2.4kg, but it makes up for it in terms of audio performance and battery life.

It sports a speaker array capable of a combined 80W output that sounds impressive, even at high volumes, and 20-hour battery life means it’ll keep on going too.

Throw in benefits like USB-A charging, Aux-in support and preset and custom EQs via the Soundcore app and you’ve got a capable outdoor speaker that’ll handle just about anything you throw at it.