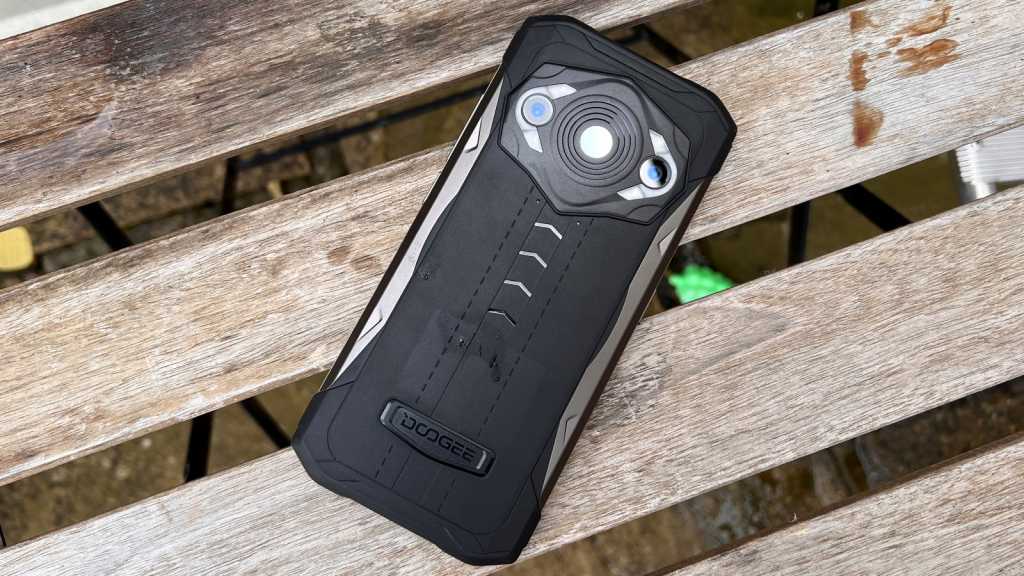 An excellent mid-range phone packed into a tough shell and sold at an impressively low price given its feature set. It may look like it could double as a house brick, but it’s actually very comfortable to hold and offers the kind of performance that blow the majority of rugged devices out of the water.

Doogee makes modern rugged phones and the S98 Pro is the latest model. It’s bulky and calls to mind what science-fiction movies from the 90s would have imagined a smartphone to look like.

It offers solid performance, good battery life, and an impressively bright display – even if it is an LCD. It’s also impressively built, with a tough outer shell and a Gorilla Glass display.

Then there are its cameras. The standard 48Mp sensor is sharp enough, but the additional night vision one is great – and can be used for thermal imaging, too.

If all of this sounds good to you, then you’ll be pleased to know that at around £350/$439, the Doogee S98 Pro is impressively affordable, and it should last you a while too since, not only is it tough, it’s running Android 12 right out of the box.

The Doogee S98 Pro looks an awful lot like the S98 that launched earlier this year – it’s bulky, with a ridged back that makes it surprisingly comfortable to hold with one hand. On the back, you’ll find a 48Mp main camera and a 20Mp Night Vision camera, both from Sony, positioned centrally. Doogee says it’s alien-inspired design features the camera bump as the alien’s head and the lenses as the eyes.

It’s also got a sizeable 6.3in LCD display with a ‘teardrop’ camera notch at the top that houses a 16Mp snapper that supports facial recognition. While the bezels are pretty thin, the ridges around the display’s edges make it tough to notice, while there’s a subtle hexagonal shape to the phone’s outer case.

On the left-hand side, there’s SIM card slot with room for additional storage, as well as a customisable button that’s raised slightly and easy to find whichever way you’re holding the phone. On the right, there’s a volume rocker, a lock/sleep button that doubles as the on/off button, and a subtle fingerprint scanner if you’d prefer that to unlock with your face (for example, if you’re often wearing a mask).

On the bottom, there’s a flap that’s pretty tough to get into (which is kind of the point), with a USB-C port inside. All of this, combined with something Doogee calls an “anti-explosion film” helps the S98 Pro hit the water and dust-proof rating of IP68 and IP69K – the highest rating you can get including protection against high-temperature pressure jets.

Curiously, though, the phone comes bundled with an additional case that covers the corners and not a lot else. That could be an indication that it’s perhaps not as tough in those spots, but I wasn’t about to throw it against a wall.

It’s no surprise that the S98 Pro is thick and heavy, but some of the weight is due to the huge 6000mAh battery – more on that later. Still, 320g is a decent amount lighter than the Doogee S88 Pro.

While we’ve seen more affordable phones stretch to as big as 6.7in displays, the 6.3-inch panel on the S98 Pro is much better than you’d find on the likes of the Moto G22.

It’s impressively bright at 480 nits, even in direct sunlight, and it’s great for watching movies or TV shows – I enjoyed an episode of Kenobi on it just fine, with the Full HD+ resolution feeling just right for a phone at this price point. Viewing angles are decent, too, helped by solid contrast, and while this is an LCD screen as opposed to an OLED one, it never feels too dull. There’s a pixel density of 409ppi, which actually gets it close to iPhone 13 Pro levels, too.

You’ll also have to be ok with a standard 60Hz refresh rate here as Doogee hasn’t been able to fit anything higher for the price here.

It’s also worth noting that, in line with its “rugged” ambitions, the screen is composed of Corning Gorilla Glass which makes it a tough customer – though Doogee doesn’t state what version. I chose not to take a hammer or anything similar to my review unit, but between the strengthened glass and the sizeable ridges that surround the display, it’s nice to know that the S98 Pro will be tough enough to take on whatever the world throws at it.

In fact, the only issue I have with using the S98 Pro as a multimedia device is that it lacks stereo speakers, although I do concede that the speakers it does have, at the bottom, are plenty loud and offer a solid soundstage.

Often, when a phone is designed for a very specific market (say, users that need their phone to be protected from the elements), performance can suffer as manufacturers take a ‘that’ll do’ approach. I’m very pleased to report that the S98 Pro is not such a case, and offers genuinely good performance thanks to its 8-core Helio G96 processor, as found in the Infinix Note 12 G96.

I ran our usual series of benchmarks and hit a multi-core score on Geekbench 5 of 1690 – it’s not flagship material, but it’ll run a solid number of apps at once, backed up by 8GB of RAM.

I did get some stutter when playing the latest Diablo Immortal release, though, so hardcore gamers will want to look elsewhere. Interestingly, the Doogee offers a Game Turbo app that can help eke out additional performance.

If you keep a lot of photos and files on your device, though, you’ll be pleased to know that there’s 256GB of built-in storage, as well as support for additional storage up to 512GB via a microSD card (not included).

Firstly, an apology – when heading out to test the S98 Pro’s cameras, I didn’t realise that there was a (bizarre) setting that added a Doogee watermark to each image until I was looking back at them the next day. Consider this a note to any prospective buyer to deactivate that in the settings immediately.

Still, once you get over that caveat, there’s a lot to like here. The main camera offers HDR support, while the night vision camera is ideal if you’re looking for, well, night vision on your phone.

Detail can be an issue with zoomed-in shots, though, as you can see from the image of the seagull where its face is completely obscured.

The selfie camera is solid, too, and picks up plenty of detail in average lighting conditions. The portrait mode is one of the better ones I’ve used in recent months when it comes to noting hair and ears, but the external background does get a little too blurred for my taste.

As for Night Vision, it’s excellent here and simply shows up in the camera menu alongside all of your more standard options. As you can see from the dusty keyboard I found at the back of a very dark cupboard, there’s an impressive amount of detail shown in shots.

Then there’s thermal imaging, which is accessed through a separate InfiRay app. As you can see, it’ll not only highlight the temperature of something, but it’ll mark it, too – I had no idea how warm my laptop’s docking station was getting!

I took the Doogee on a few long walks to snap photos, used it as a way to catch up with social media and email, and played games on it and it gave me just over two days of battery life.

That’s thanks to its huge 6000mAh battery, but also likely down to a lack of 5G support as well as an LCD screen. Doogee says it can last up to three days, and with a little less playing around with the thermal camera, I got to around two and a half days with ease.

Our usual PC Mark Work 3.0 test hit 13 hours and 33 minutes, which seems a little low considering the large capacity here and in the general mid-range market it’s solid but rivals like the Nokia XR20 and Motorola Defy went much longer in this test (see the benchmark chart above).

Fast-charging is supported, too, so you can top that sizeable battery up relatively quickly. I got it to just over 20% in 15 minutes, and 46% in half an hour. The charger in the box is a 33W PD (power delivery) fast-charger. There’s also wireless charging at a slower 15W speed, but this is rare for the mid-range.

The Doogee S98 Pro offers Android 12 as standard, meaning you’ll get access to all of Google’s latest OS goodness, including the customisation features.

As you’d expect, all of Google’s stock apps are here, as well as Google Assistant, and everything is nice and responsive throughout. In fact, the only place we spotted even a modicum of slowdown was when opening the camera app,

In line with its rugged ambitions, there’s an app bundle called Outdoor Toolkit that includes a compass, alarm, protractor, and more, making it a handy device to have on a toolbelt. Aside from that and the aforementioned Game Turbo app, there’s little in the way of bloat here.

There’s also the option to hide or show the software “navigation” buttons at the bottom of the screen. I was fine toggling them off, but many users will undoubtedly want to keep them on the screen for quick access to the home screen. As with any modern Android phone, you can switch to gesture-based controls, too, so that a swipe brings you to your home screen while holding opens multitasking.

Doogee doesn’t make any promises about OS updates but I imagine the phone will at least get Android 13.

The S98 Pro is rolling out globally with a price of US$439.99. It’s only available in black and you can buy it from Doogeemall for that RRP, though it says it’s $160 off which does not match with the RRP given to us.

The phone is also available via AliExpress for around £350, which is slighter cheaper if you convert the $439.99. The regular S98 is available from Amazon UK so hopefully the Pro will be added soon.

Check out more options in our chart of the best rugged phones.

Doogee’s S98 Pro is an excellent option for anyone looking for a phone that’s tough enough to withstand water, dust, and anything else thrown at it (maybe even explosions), but it’s also much more than that.

It’s a great Android 12 device with some very cool cameras, impressive battery life, and a bright display, and it’s easy to recommend at this price point – as long as you don’t need 5G.