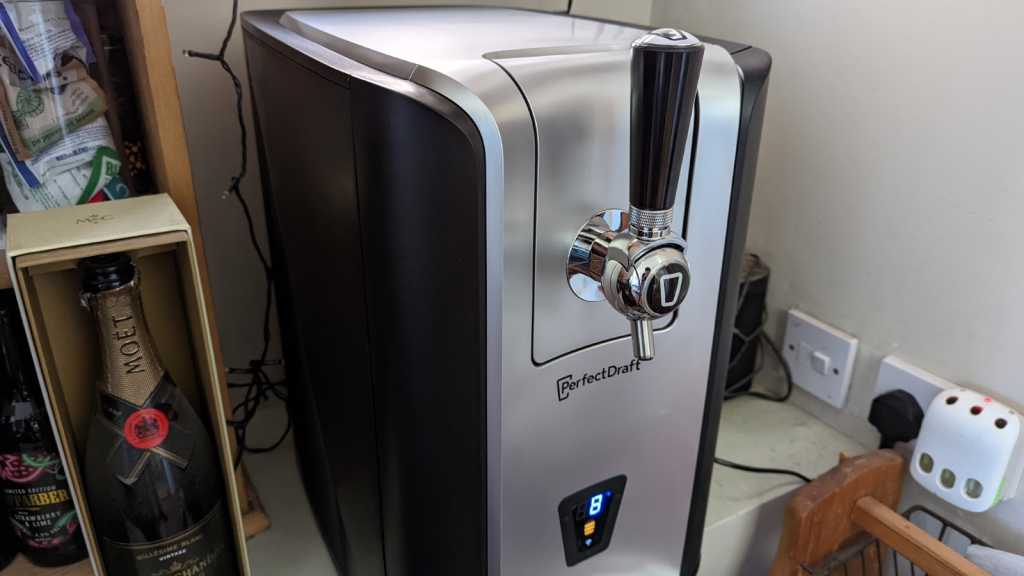 If you want the most luxurious beer dispense machine around then you just found it. The PerfectDraft Pro is the only one with Wi-Fi and its own app. While that’s nice to have, adjusting the temperature is the main upgrade here but the price and size might put some potential customers off.

The new Pro model comes with various upgrades, including adjustable temperature, faster cooling, quieter operation and it even has built-in Wi-Fi and an accompanying app so you can control it from your phone.

If you’re not familiar with the original PerfectDraft, you buy 6L kegs from Beer Hawk, put them inside the machine and simply pour beer as and when you like over the course of 30 days or until the beer is gone.

Overall, the PerfectDraft Pro is much like its predecessor, although it’s a bigger machine. At 29.4 x 40.1 x 44.5cm, it has a larger volume by around 55%, so make sure you have space for it before you buy (including 10cm of air space at the back and sides for optimal operation).

It’s once again black and silver with the tap system at the top and an LCD screen lower down at the front. Tweaks to its design include a single door, rather than two, and a built-in drip tray you can slide in and out.

The tap is more robust than before and has a chunkier handle with a new tightening nut. You still put a magnetic medallion on the top (four colours are included in the box with customisable ones coming soon, according to the website) and now you can put one on the front of the round tap, too.

These are not particularly well-made as I found the one on the front had fallen off after less than two weeks, leaving the magnet behind.

The door now only opens the left, revealing a new system inside for inserting the keg. The tap connects to the top of the keg as before but now it slides in, leaving the keg sort of suspended in the air rather than sitting on a chilling plate.

It’s a little easier to insert the keg now but the fact that there are no locking arms means it’s harder to know whether it’s fully in. However, if you can close the door and can’t see any red on the latch, then you’re sorted.

Oddly, there’s nothing on the machine or the box calling the device Pro. In fact, the instruction manual calls it the PerfectDraft 1.1 in one section. Also, not that it really matters, but it’s not manufactured by Philips like the original.

I haven’t had the PerfectDraft Pro long enough for something to go wrong but the screen will also display error codes which you can then look up in the manual to find out what’s wrong and how to fix it.

Confusingly, the screen said ‘do’ (door open) even though it was closed, so at this point, I connected the PerfectDraft Pro to my phone. The app is available on iOS or Android.

Connecting is a fairly simple process, using the Wi-Fi button underneath the display and then following the instructions on the app to get the machine on your network.

Once connected, you can see various bits of information about the beer (with suggested food pairings and glass style) and machine. Namely the current temperature and – once you’ve poured the first beer – the remaining volume and days left (starting at 30).

Previously, the number of days left was displayed on the machine but now you just get the temperature and an indicator of how much beer is left. There are four yellow bars in the shape of a keg, rather than the nine bars of the original PerfectDraft.

Still, the app gives you a much clearer idea and if you don’t want the volume indicator in litres, then you can also choose UK pints, 33cl glasses or fl oz.

Once your keg is in and chilling to your desired temperature, the app can notify you when it’s ready (or the screen on the machine will turn the number blue when it’s within two degrees of the desired temperature). It can also give you notifications for things like the keg being nearly empty and maintenance. The shop tab provides an easy way for you to buy new kegs from Beer Hawk, too.

As mentioned, the variable temperature is one of the major new features of the PerfectDraft Pro and it’s something I wished the original could do. It’s even more appropriate now as the range of beers available has increased and includes more beers that can be enjoyed at temperatures other than the previously locked three degrees.

By default, you can adjust the temperature between 3-7 degrees, either with the buttons either side of the screen or on the app. If using the latter, you’ll need to unlock the extended range which allows you to go up to 12 degrees or as low as zero degrees.

Let the app know what keg is inside, and you’ll even get a suggested optimal temperature. I chose Magic Rock Dark Arts, a 6% stout as the perfect example of a beer many users will want to drink at a slightly warmer temperature.

You will be warned that a higher temperature can result in pours with a bigger head, but I didn’t find it too much of an issue. This might be down to the ‘Smart Pour technology’ but there’s no explanation of what this is or how it works.

The machine can cool kegs more quickly than the original at a quoted 10 hours from room temperature rather than 12 hours. When I put a keg in, after a long period when an orange line danced around, the display showed 12 degrees. Impressively, it cooled the keg down to three degrees in around five hours. If you have a big enough fridge to store a keg in, it’ll take no time at all.

Another upgrade is the ability to remain stable in temperatures of up to 38 degrees, with the regular PerfectDraft only 31 degrees. I couldn’t test this, but the hottest day of the year occurred during testing, hitting 30 degrees, and the machine didn’t appear to need to work too hard.

In general, the Pro machine is quieter in operation than the original – this is mainly the fans, but also the air pump a little, too.

Dark Arts remains the only stout on offer but there are other beers that you might want to pour at higher temperatures, namely the Belgian beers from the likes of Leffe and Kwak; these are traditionally poured with voluminous foamy heads anyway.

The choice is a lot better than when I reviewed the original PerfectDraft. There are now over 65 different kegs available (although it’s unlikely they’ll all be available at the same time) including modern IPAs like Vocation’s Life and Death and even Orchard Pig Reveller cider.

I’m not sure which beers I would run at below three degrees but if you like the ‘extra cold’ draught option when you’re in the pub, perhaps for a lager, then this is available to you.

Prices range from £25.52 to £42.90 per keg at the time of writing and, as previously, you’ll get £5 credit for each empty keg you return. The process is free and easy since a courier can collect from your home.

The PerfectDraft Pro costs £385, making it an expensive gadget, but it’s not the most expensive beer dispense device out there, with the Heineken Blade at £445.

After a period of fulfilling pre-orders from a waitlist, the PerfectDraft Pro is on general sale. You can get it for the base price with two free glasses or buy it with kegs in various bundles.

If it’s too expensive for you, the original PerfectDraft remains on sale for £249.99. There are even cheaper options out there, such as The Sub at £119. You could also make your own self-pour beer with the Pinter 2, which is £149.

The PerfectDraft Pro is an excellent beer dispense machine for those that want draught pours at home with minimal hassle and excellent results.

However, it is expensive and bulkier, so you have to ask yourself whether the additional features are worth the extra money.

The option to adjust the temperature is the main upgrade, so you should consider whether you’ll be drinking beers that take advantage of this. Still, overall performance is better, too, and the app is a nice addition, so there are other reasons to splash out on the Pro model.