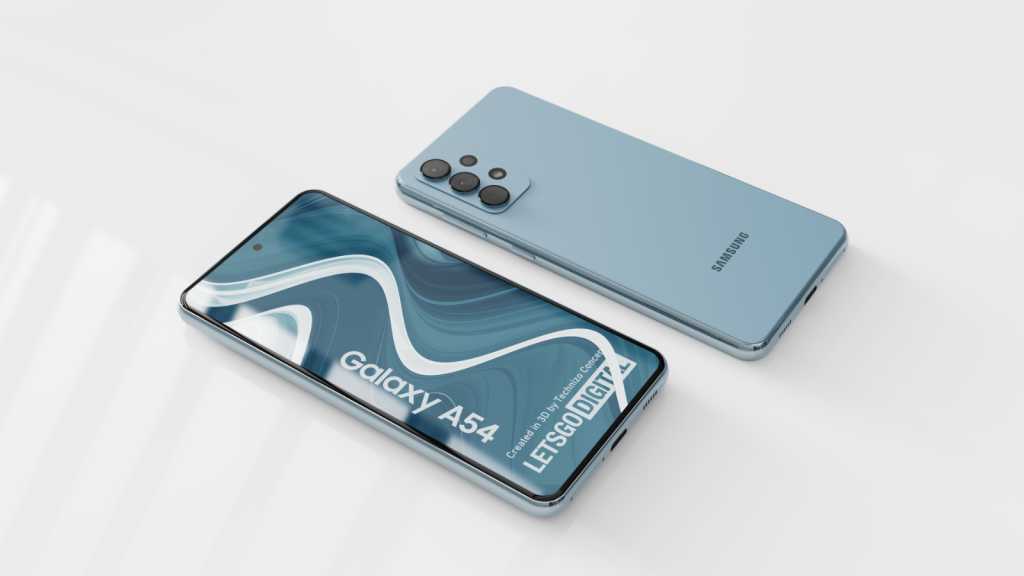 Samsung’s Galaxy A-series of smartphones are a decent mixture of performance and affordability. In March 2022 the company unveiled the latest iteration of the series, comprised of the Samsung Galaxy A53 5G and Samsung Galaxy A33 5G. But we’re already seeing rumours appear about the A53’s successor.

So, here’s all we know so far about the Samsung Galaxy A54.

When is the Samsung Galaxy A54 release date?

There’s no official release date for the Galaxy A54 as yet, but we can get a good idea of when it might appear by looking at the previous models. Here’s when they made their debuts:

As you can see, the usual release time is around March/April for the main numbered entries in the A-series. So looking ahead, it looks likely that the Galaxy A54 will arrive in March/April 2023.

How much will the Samsung Galaxy A54 cost?

As with the release date, there’s no confirmed pricing for the Galaxy A54 at the time of writing. Once again, we can look to its forebears to see the cost that may be involved. Here’s how they lined-up:

Going by these pretty steady prices, we’d expect the Galaxy A54 to arrive at around the same mark as the A53 5G.

What will the Samsung Galaxy A54 specs and features be?

As you’ve probably worked out by now, Samsung has yet to make any kind of announcement about the Galaxy A54, so we are left in the realms of rumours and past performance to work this out. We have seen some news creeping out though, with suggestions of what may be planned for the new device.

Designer Technizo Concepts has teamed up with Lets Go Digital once more to create some excellent renders of how the Galaxy A54 could look. Alongside the various still images posted on the site, there’s also a full video on Technizo Concepts’ YouTube channel which shows a device that has a very appealing aesthetic.

While these are purely conceptual rather than drawn from any official information, they’ve been created with a lot of attention to detail based on Samsung’s current design ethos. For instance, the front panel features symmetrical bezels as on the Samsung Galaxy S22, moving away from the slightly fatter lower bezel that’s currently found on the Galaxy A53 5G (and Samsung Galaxy S21 for that matter).

On the rear we also see that the camera bump has moved from the moulded rise in the A53 5G to a cleaner platform where the lenses are uncovered. This is closer to the design employed on the Samsung Galaxy S22 Ultra, so it might be a bit ambitious to have it on the cheaper device before it makes its way to the general Galaxy S-series.

A more recent leak from OnLeaks and 91Mobiles shows a render of the alleged A54 with triple rear cameras and a centred punch hole camera, but no camera island, just three bumps where the lenses are – aping the S22 Ultra once more.

Galaxy Club reports on a few more details about the phone’s specs. First up, it will apparently move to a 50Mp main camera – something you could see as a downgrade from the A53’s 64Mp shooter, but in practice it’s likely to be a better sensor and lens.

The site also says that the phone should have a slightly larger battery, with a rated capacity of 4905mAh. The A53 battery was rated for 4860mAh, and advertised as a typical 5000mAh battery, so it probably means the A54 will be officially listed with either 5050mAh or 5100mAh. Not a big difference, but hey, every little helps.

In terms of other specifications, we’ve seen no solid rumours so far, but here’s what we hope to see in the new Samsung A54:

In our review of the Samsung Galaxy A53 5G, the number one complaint was the performance, which we put down to the Exynos 1280 chipset. If Samsung wants the next model to be competitive in an increasingly aggressive section of the market, then the processor needs to be a lot better.

We’ve seen reports lately that Samsung is working on developing bespoke processors specifically for its Galaxy range (although we expect this to be the flagship models). While doing this, it’s thought that the company will limit the development of the Exynos range, as its resources will be deployed elsewhere. This means we might see Qualcomm processors in the all the Samsung devices next year, which could mean improved performance for customers in Europe and India.

The A52 and A52s both came with Snapdragon 7-series processors, which were fine, so if Samsung can return to something like that then things could improve dramatically. XDA Developers has already reported that Qualcomm has new Snapdragon 7-series chips on the way, so maybe the Galaxy A54 will benefit from improved performance with that silicon.

Depending on the configuration that was available in your region, the A53 5G either came with 4, 6, or 8GB of RAM. In these days of demanding apps and high-quality photo/video capture, we would hope that the higher end of that selection was made the default in the Galaxy A54.

While the battery life on the Samsung Galaxy A53 5G was impressive, the recharge times were not. Limited to only 25W, this meant you were looking at around two hours to return a discharged battery to 100%. Even at the lower end of the price scale, this is poor, especially when some cheaper Android phones can be completely replenished in just over 30 mins.

We definitely want to see improvements in this area for the Galaxy A54. Plus, putting a decent charger in the box would also be a real benefit to customers.

That’s all we’ve gathered together so far, but of course we’ll be updating this article as more details emerge. Be sure to check back regularly to see what we uncover. Until then, why not peruse our roundup of the best mid-range phones to see what other options are available.