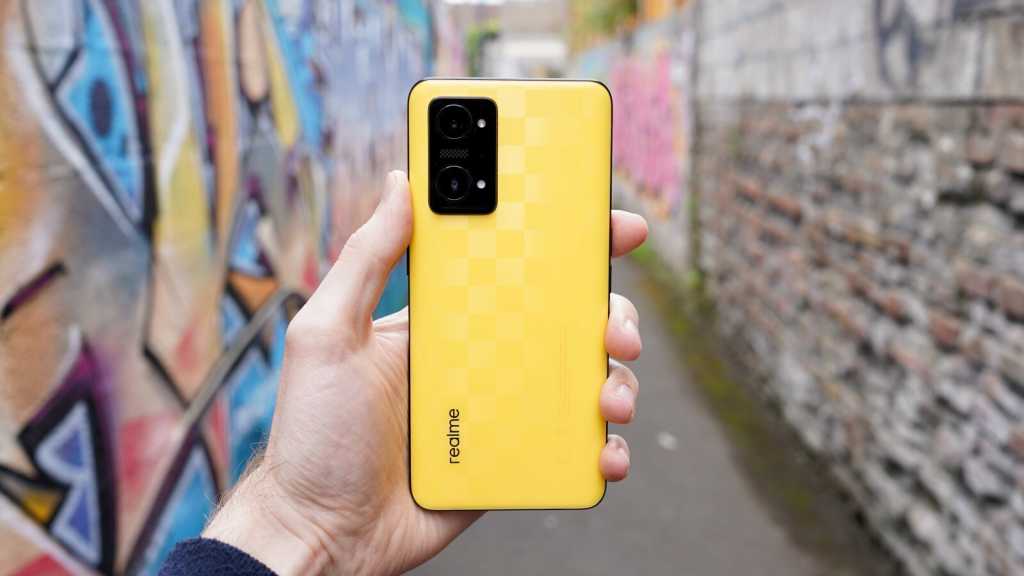 The Realme GT Neo 3T is another assured mid-range effort from this prolific brand, offering strong performance, a 120Hz AMOLED screen and speedy charging. However, it’s remarkably similar to last year’s Neo 2 and there’s strong competition at this price point.

With an eye-catching racy design (depending on the colour you opt for), capable performance and rapid charging, it’s another speedy addition to the GT line. But is speed all you need at this end of the market in 2022?

Realme has made quite the name for itself when it comes to thinking outside of the box with its designs. Following on from the chameleon-like finish of the Realme 9 Pro+ and the go-faster stripes of the regular Realme GT Neo 3 we have the ‘angry bee in Formula 1 livery’ looks of the Realme GT Neo 3T.

Provided you opt for Dash Yellow shade rather than the Drifting White or Shade Black options, that is. Fortunately, Realme did indeed send me a Dash Yellow unit. Or should that be, unfortunately?

The waxy yellow plastic look of the rear cover is certainly an acquired taste. Hold the phone at an angle and you’ll notice a chequer boarding effect across that rear panel, which is mirrored in a little strip between the two main camera modules.

That camera module, together with the plastic frame, are rendered in deep black. The contrast makes quite a statement, though whether that’s a positive thing or a cause of embarrassment will come down to personal taste. This being a review, I’ll come out and admit that I don’t like it, but I respect Realme for trying something different.

Otherwise, this is a deeply generic smartphone design, with a very similar shape and proportions to the Realme GT Neo 3, which I had to hand during my review period. I weighed the GT Neo 3T at 195g, which is 5g more than the OnePlus Nord 2T and 13g more than the Realme 9 Pro+.

There’s no IP rating here for dust or waterproofing.

The Realme GT Neo 3T packs a 6.62in AMOLED display with a Full HD+ resolution and maximum refresh rate of 120Hz. That makes it bigger and smoother than both the Realme 9 Pro+ and the OnePlus Nord 2T, and just a smidgen smaller than the full Realme GT Neo 3.

In terms of colour accuracy, I found the Natural display setting to be preferable for its less gaudy output. Under these conditions, I recorded a gamut coverage of 100% sRGB against a gamut volume of 107%, with a Delta E score of 1.35 (with 1 being the ideal).

It’s not a top tier AMOLED, then, nor even as good a panel as that of the Realme GT Neo 3, but it is a solid effort that competes well with the rest of the £400-ish crowd.

You also get a speedy, reliable in-display optical fingerprint sensor. That’s to be expected for this sort of money, but it’s worth mentioning nonetheless.

There are stereo speakers here, though they offer a noticeably asymmetrical output, with the bottom-firing speaker way more prominent than the weedy earpiece speaker. There’s no headphone jack here either, unlike with the Realme 9 Pro+.

Realme has equipped its new mid-ranger with a Snapdragon 870 from Qualcomm. While this is a slightly older mid-range chip that first appeared in early 2021, it absolutely blitzed the competition at the time.

Most notably, the Poco F3 used this chip to embarrass a number of pricier models. It’s also the chip that powered last year’s Realme GT Neo 2 to great effect. Like I said in the intro, there are a lot of similarities between these two phones.

While it’s no longer quite the disruptive tearaway it used to be, the Snapdragon 870 remains a very capable mid-range chip. Essentially an overclocked Snapdragon 865 (the go-to flagship chip of 2020), it here produces average Geekbench 5 scores of 996 single core and 2881 multi-core.

Backed by Realme’s Stainless Steel Vapor Cooling System Plus, which ensures that the chip remains cool under sustained load, the Realme GT Neo 3T is a solid choice for gamers on a budget. I was able to run Genshin Impact on High graphical settings and 60fps with playable results.

In the UK, you’ll get 8GB of RAM and 128GB of storage – although my review sample had 256GB which is reserved for the Europe-only Dragon Ball Z Edition (which this is not).

I’ve already touched upon the Realme GT Neo 3T’s inherent similarity to the Realme GT Neo 2, and that carries through to the camera system. It seems to be identical, with a 64Mp wide sensor with 8Mp ultrawide and a 2Mp macro.

Needless to say, the image quality falls well behind that of the pricier Realme GT Neo 3 with its flagship-standard Sony IMX766 sensor. The trouble is, both the OnePlus Nord 2T and the Realme 9 Pro+ run this same sensor, and they cost the same sort of money as the GT Neo 3T.

This quality shortfall isn’t always apparent in good lighting, where the Realme GT Neo 3T’s main sensor can capture sharp, colourful shots. I was genuinely pleased with many of the results I got.

I’d recommend steering clear of Realme’s AI assistant for the most part, though. While it served to brighten up some of the dingier daytime shots I took, and successfully compensated for some challenging HDR scenarios in others, it also threw the colours out of whack in more normal shots. We’re talking nuclear greens and glowing reds here.

Those aforementioned rival phones open out a huge lead when it comes to low light performance, especially when the Night mode comes into play. The GT Neo 3T’s night snaps turned out murky and lacking in detail by comparison. 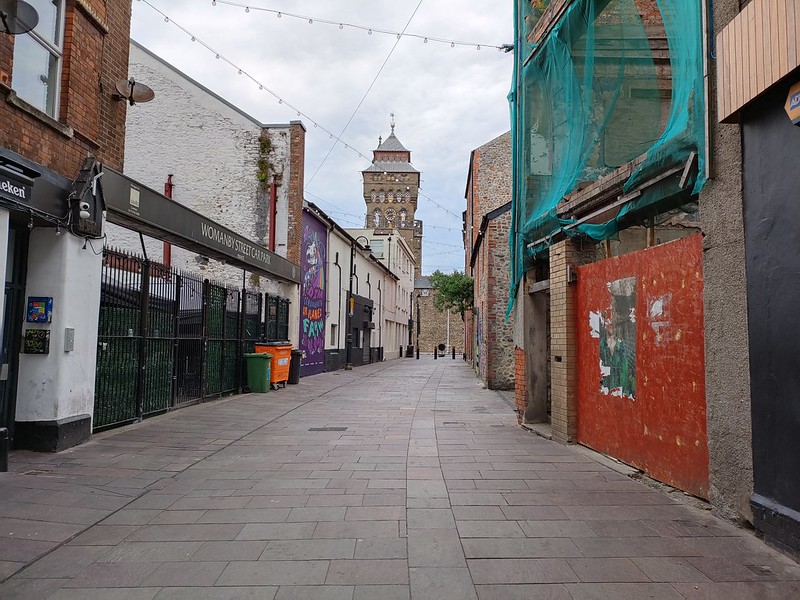 Realme’s 8Mp ultrawide doesn’t offer much to shout about, with inferior detail, edge fidelity, and colours. There’s no telephoto lens to call upon for zoomed shots either, so you’ll have to rely on crops from the main sensor.

Of course, both of those last two criticisms can be levelled at the Realme GT Neo 3T’s main rivals, and the vast majority of sub-flagship phones for that matter.

The less said about the 2Mp macro camera the better but if you insist, it is predictably useless. There’s a dedicated Ultra Macro mode in the camera app, but the results are so soft and low-res that they completely defeat the purpose, which is of course to accentuate detail on extreme close-ups.

The 16Mp selfie camera isn’t of great quality. Compared to the GT Neo 3 equivalent it’s badly lacking in fine detail, and it struggles to rein in highlights.

The Realme GT Neo 3T comes with a 5000mAh battery. That makes it just like the Realme GT Neo 2, and offers a rare advantage over the 4500mAh GT Neo 3. It also one-ups the OnePlus Nord 2T and the Realme 9 Pro+, both of which also come with 4500mAh cells.

I found that a full day of moderate usage (around 3 hours of screen on time) would still leave me with well over half a tank full, which is strong going.

It falls a good 3 hours short of the iQoo Neo 6, however, which shows that it’s possible to optimise better with similar components.

Realme has bundled its phone with an 80W charger, which in my experience is capable of getting you from 0 to 60% in just 15 minutes, and to 100% in around 32 minutes. That’s only a few minutes short of the OnePlus Nord 2T in both cases.

The Realme GT Neo 3T launches with Realme UI 3.0 based on Android 12, just like the Realme GT Neo 3 and the Realme 9 Pro+. It sports the same cohesive if somewhat charmless layout, with Google Feed to the left and a full app tray an upwards drag away.

You also have to put up with a similar level of bloatware, including compulsory preinstallations of Facebook, Amazon Shopping, TikTok and LinkedIn. At least there’s no Booking.com this time around.

Realme keeps its UI embellishments relatively low key, certainly compared to the likes of Xiaomi’s MIUI. Its menus are smooth and uncluttered, and it’s a generally pleasant OS to navigate through, even as it loses style points to those skins that adhere closer to stock Android (and OnePlus’s sharp OxygenOS).

As with other recent Realme phones, the Realme Lab Settings menu enables you to use the fingerprint sensor to take your heart rate measurement, if such a thing is of interest. This screen also includes such interesting experimental features as the ability to use a pair of wired headphones and a pair of Bluetooth headphones simultaneously.

The latter might have actually been quite useful had Realme opted to include a 3.5mm headphone jack. Break out those USB-C-to–3.5mm adaptors if you’ve got them.

In terms of future support, you get two years of OS updates and three years of Realme UI security support which is pretty standard for mid-range phones.

The Realme GT Neo 3T is priced at £369 getting you 8GB of RAM and 128GB of storage. The phone will go on-sale on 15 June from Realme.com and Amazon.

At this price, it competes directly with the OnePlus Nord 2T and Realme’s own Realme 9 Pro+, as well as the likes of the Oppo Find X5 Lite for just a little over the £400 mark.

If you do want more storage then you’ll have to get the Dragon Ball Z Edition for €499.99 – also with 8GB of RAM – which will launch in selected European markets on 8 July.

Check out our list of the best mid-range phones to see more options.

The camera is nothing to write home about, especially when compared to rivals such as the OnePlus Nord 2T and the Realme 9 Pro+, and the bright yellow livery of my test model won’t be to everyone’s taste.

It’s an undeniably speedy phone, however, whether you’re talking about its vintage Snapdragon 870 engine, its 120Hz AMOLED display, or its decidedly modern 80W charger.

If you’re a stickler for performance or an avid gamer with a sub-£400 budget, it’s worthy of being added to your shortlist but definitely check out the competition – even Realme’s other handsets – before pulling the trigger.