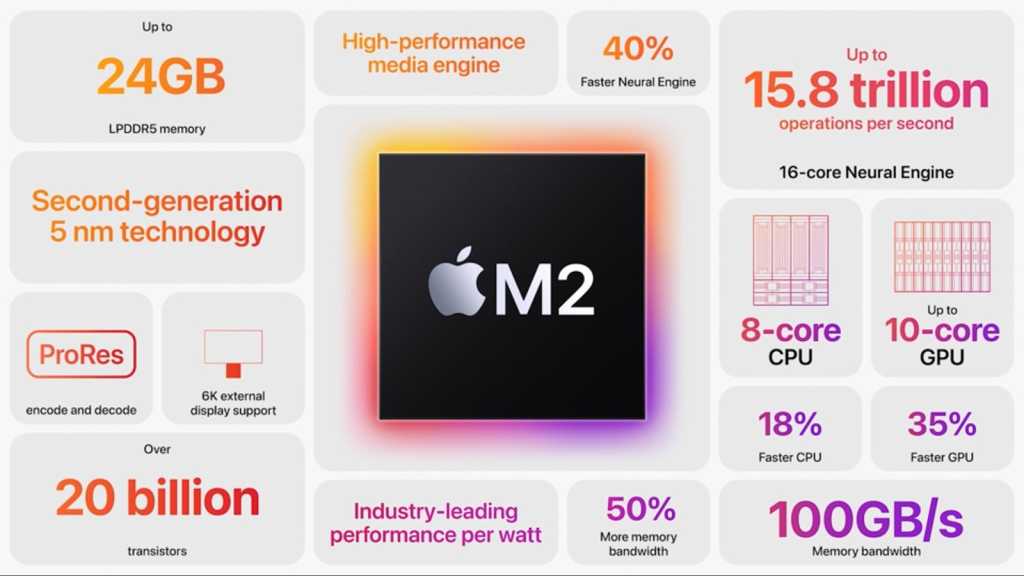 Apple announced its M2 processor at its 2022 WWDC event, claiming the new silicon can eke out 18% greater performance compared to the M1 chip in current Macs.

What does that actually equal in real life? Well, Apple claims the M2’s CPU and GPU are 18% and 35% faster respectively over M1.

The new silicon also boasts of a 40% faster 16-core neural engine capable of nearly 16 trillion operations per second. It also will be able to support 100GB/s memory bandwidth.

For people using the computers it should result in better performance for those CPU-heavy applications used in music production, video rendering, 3D modelling, and similar. Of course Apple said performance trounces Windows computers, boasting of twice the performance of a 10-core PC laptop at the same power level.

Similarly, Apple said the GPU in the M2 can run 2.3x faster than “the latest PC laptop chip” and “matches its peak performance at the same power level”.

This taunting is usual but the M1 was so good that we won’t be surprised if this proves to be true.

This M2 update comes after the M1 was launched in November 2020. Since then, Apple has added the M1 Pro, M1 Max, and M1 Ultra to the line-up. M2 will be able to support up to 24GB of LPDDR5 memory, leaving the door open for possible similar beefed-up iterations for desktop Macs soon.

The M2 will debut in the newly announced MacBook Air that takes its design cues from the latest MacBook Pro, losing the wedge shape but gaining a deep blue colour option and larger display. These laptops will sell running macOS Ventura, the latest version of Apple’s Macintosh operating system.

Given the clear and huge performance and battery life gains the M1 gave over the Intel MacBooks that came before it, we’ll have to wait and see if the new M2 will feel like such a leap forward.

M2 is also sliding into the 13in MacBook Pro, the Pro still on sale with an older design than the 14in and 16in Pros launched in 2021. It’s an interesting move to boost the 13in model rather than update the design or can it, but Apple said the 13in was still the company’s second best-selling laptop after the MacBook Air.