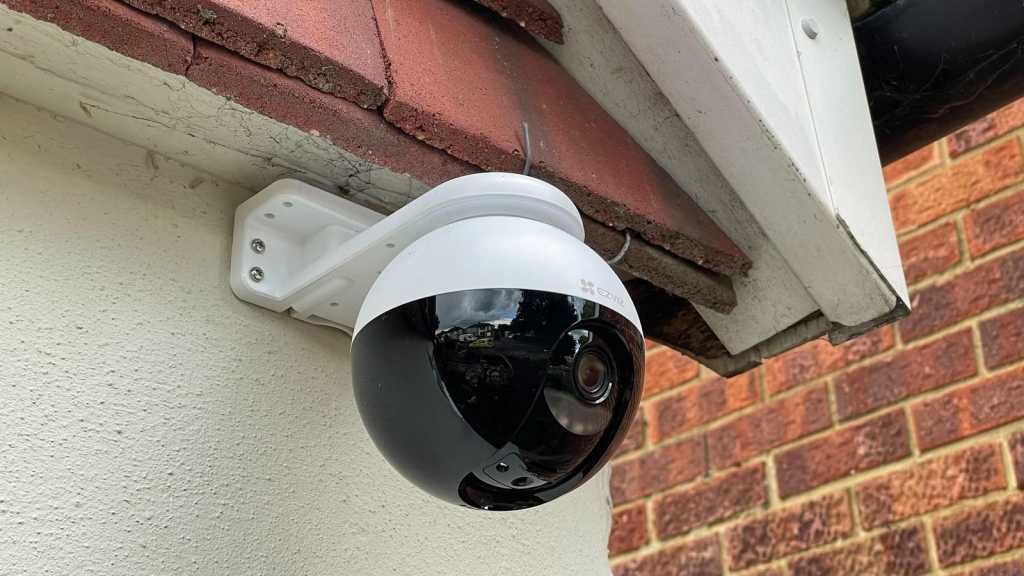 The C8W Pro offers pretty good quality video both day and night and does a good job of tracking people during the day. It isn’t as smart as rivals, though, and the clunky app needs work.

The C8W Pro is the latest in the C8 outdoor security camera range from Ezviz. Compared to some of the company’s previous outdoor cameras, including the C8C, it ditches the rather unsightly external antenna in favour of internal ones that can’t be seen.

And though it’s quite sizeable, it doesn’t appear so when mounted up by the eves on your house.

Unlike the battery-powered BC1C, also reviewed, the C8W Pro is mains powered and is designed to be mounted permanently in one position.

With traditional CCTV camera looks, the C8W Pro should act as a deterrent to anyone with malicious intentions that spots it.

But on top of recording evidence, there’s also a built-in siren that you can set to sound automatically when a person is detected, or activate it manually from the live view screen in the app.

Built-in LEDs can also be set to flash to further deter someone, but if you choose this, you can’t also enable colour night vision, which is a shame. There’s also no way to turn on LEDs manually or with a smart assistant (something you can do with Netatmo’s Outdoor camera).

One of the big differences between this and the C8C, which we’ve reviewed, is the ability to track people.  This is done using on-board AI which allows the camera can pan and tilt as necessary to follow its subject wherever it moves within view of the camera. It will then return to a pre-set position you set by tapping the star button beneath the manual pan and tilt control.

You can save multiple ‘favourite’ positions, but it’s unclear which of these it chooses as the default after tracking someone. It appears to be the last one you tapped on in the Preset Locations screen. 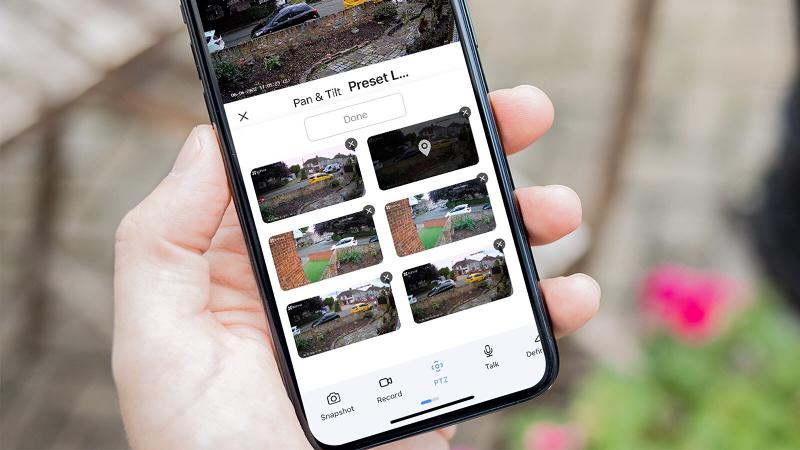 A built in microphone allows you to hear what’s happening live (and on recorded video) and a speaker lets you talk to someone in front of the camera.

What’s missing is AI detection of parcels and animals: not strictly necessary for a security camera of this type, but a nice-to-have for those users that want it. There’s also no face recognition, which means the C8W Pro can’t tell you who it has seen, nor alert you only if – for example – an unfamiliar face is spotted.

Despite being able to identify vehicles, there is no option to automatically track them in the Auto Tracking settings. The app has just one option here: Human Tracking, which you can turn on or off. 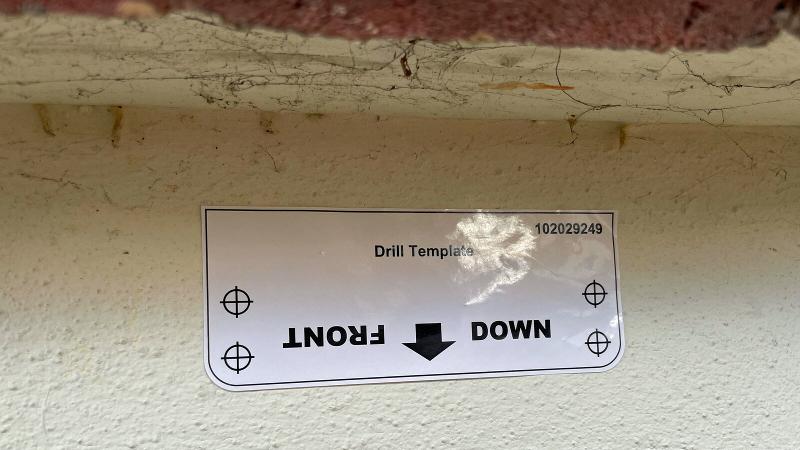 Installation and setup is straightforward. A drill template, wall plugs and screws are supplied, and a long extension cable in case a mains socket is a long way from the position you need to mount the camera. Two screws secure the weatherproof cover for the microSD card slot, which is beneath the camera. 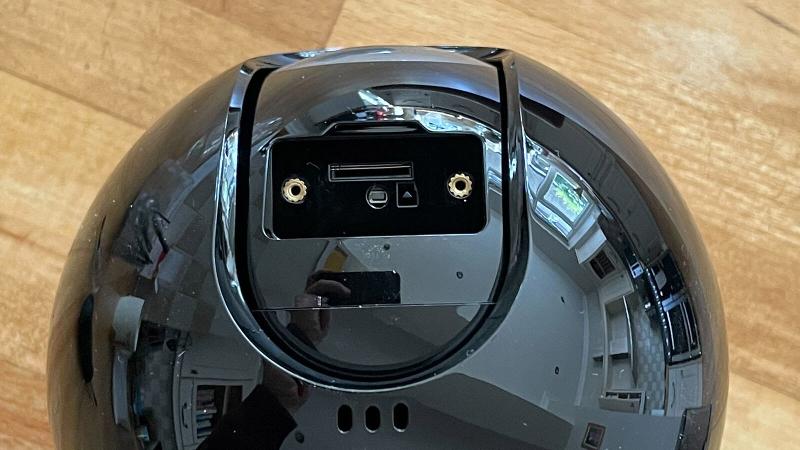 Even though I mounted it on the wall outside a room containing one of my mesh Wi-Fi nodes, the app showed a very weak signal. My phone showed a strong signal at the same position, which suggests the issue is with the camera, not my Wi-Fi system.

It’s surprising as Ezviz’s BC1C works well despite being placed much, much further away from the house where the signal is much weaker. Perhaps moving the antenna inside wasn’t such a great idea after all.

Any smart camera relies heavily on its companion app because it’s through the app you control it, adjust settings and view live and recorded footage.

Unfortunately, Ezviz’s app isn’t great. It’s hard to navigate, the design is messy and it’s never easy to find what you want, even if you’ve used it for a while.

For example, when looking at the list of recorded clips you can tap the left or right arrows to move between different days, or tap on the date itself to see a calendar and pick a date. 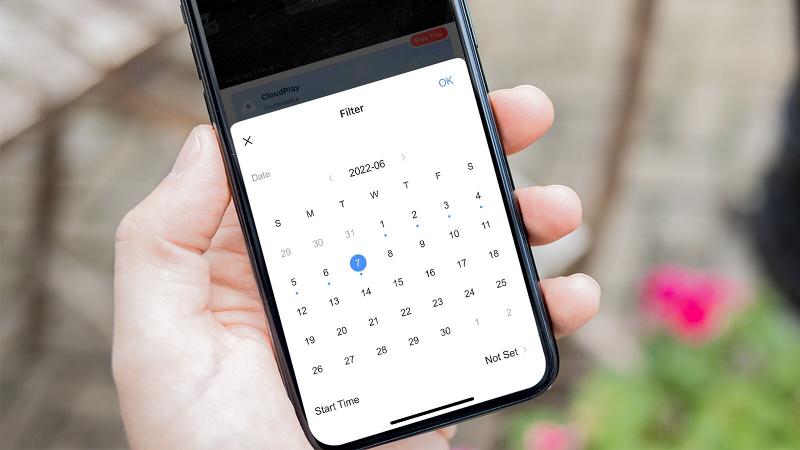 There’s also a filter button but instead of allowing you to filter clips by, say, person or vehicle, it simply brings up the calendar for you to pick a date: exactly the same function as tapping on the date. And there is no way to filter by people so you can ignore all clips that don’t feature people.

A second example is notifications. Instead of giving you some useful information about what has been detected, they all say “Smart Detection Alarm” along with the date and time in long form. 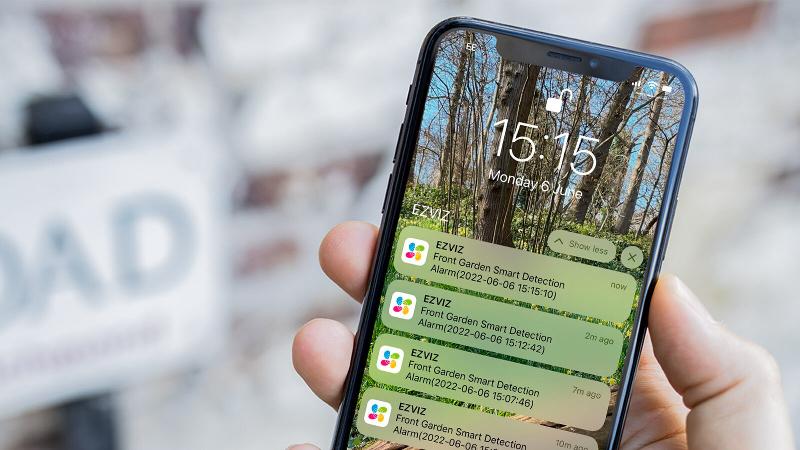 And if you tap on one, it won’t open the app and play that clip as you’d expect. It will just take you to the playback screen and leave you to tap on the latest recording.

Stranger still, you do get rich notifications with a thumbnail and a button to play back the clip, but these appear only if you happen to have the Ezviz app open at the time.

In the settings are three types of notification: Human Shape Detection, Vehicle Shape Detection and Image Change Detection. But you can only select one of these options at a time which is a bizarre restriction to impose. 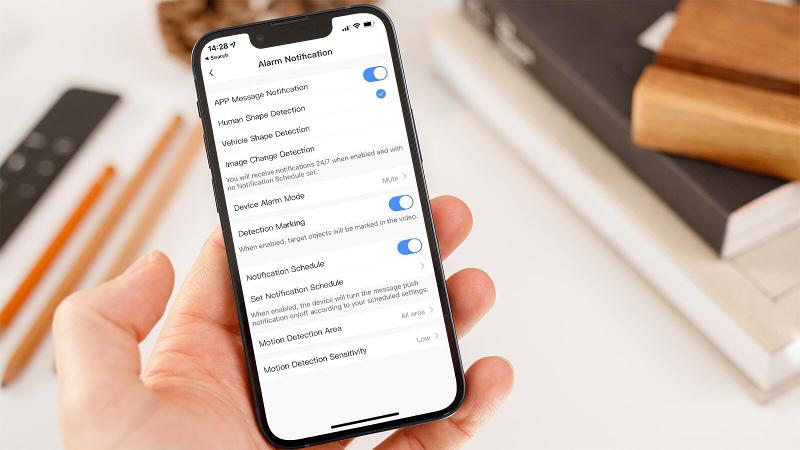 And unless you mount the camera so it cannot see anything outside of your property, or you define a zone to ignore, you’ll get a lot of alerts for events that aren’t important, such as people walking past your home or vehicles driving by on the road.

Annoyingly, if you do use the grid to set up a detection zone, everything outside of it will be ignored. Google’s approach with its Nest cameras is much better: you can define multiple zones and the alerts will include in which zone the event was detected so you know whether to investigate further or not.

Personally, I want the camera to record all people and vehicles, but only be notified about those moving within a zone I specify. That’s just not possible with the C8W Pro.

Plus, defining a zone on a pan and tilt camera doesn’t make sense as it will apply only when it’s pointing in a specific direction.

It is possible to set a notification schedule, so at least you’ll only get notifications between the hours you choose.

There are many more examples of where Ezviz could improve its app, and you’ll read about others in my  BC1C review, but it’s frustrating that not a single one of those has been fixed or improved since that review, so I don’t hold out much hope of anything changing anytime soon.

With a 2K resolution, the C8W Pro captures slightly more detail than 1080p cameras and the built-in light allows it to deliver colour night vision. There are three modes you can choose in the app: colour, black-and-white or smart.

Pick the latter and the IR LEDs will be used until motion is detected. Then, the white LEDs switch on and provide colour night vision.

You can also use two sliders to choose how long the lights remain on and how bright they are. At their brightest, they can illuminate a space a good few metres in front of the camera and deliver good quality compared to the usual mono night vision. 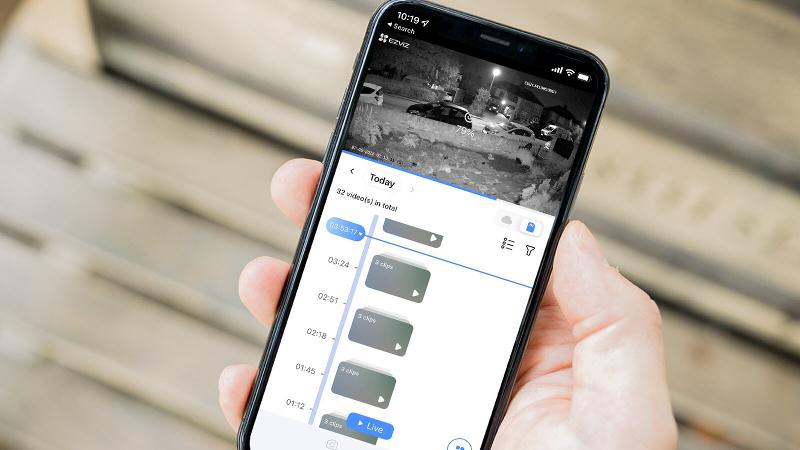 During the day, images look sharp and have good contrast. You can zoom in, digitally, but when you do so you’ll notice a distinct lack of fine detail. For example, it isn’t usually possible to read car registration plates or recognise faces a long way away from the camera. 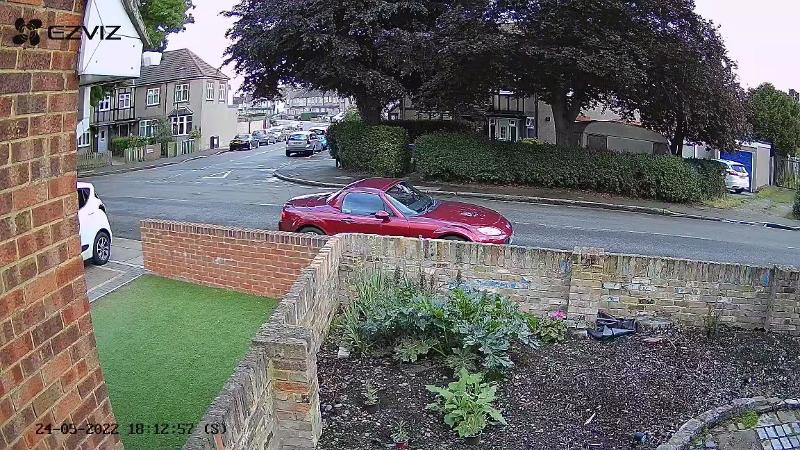 When the camera is in auto-track mode, it takes a couple of seconds to lock onto a person. But the system does a good job of actually tracking them as they move around. Afterwards, the camera will return to the pre-set view you’ve chosen, but first rotates unnecessarily to first face the wall you’ve mounted it on. Tracking is much less reliable at night, too.

Oddly, there is no mode where the camera periodically pans to see what’s happening in other directions. This means it will only spot and track people moving in the 87° field of view it can see in its default position, which is a shame if you were hoping it could track someone anywhere in the 340° of movement possible.

When reviewing clips involving tracking, movement is jerkier than you might expect as the camera appears to move smoothly when you watch it.

If you opt to record video locally on a microSD card, there’s a somewhat hidden option to record continuously in the Storage Status menu within Settings. Cryptically called ‘All Day’, there’s a toggle you can enable which will prompt a warning that there’s an increased risk of damaging the storage card by recording constantly. 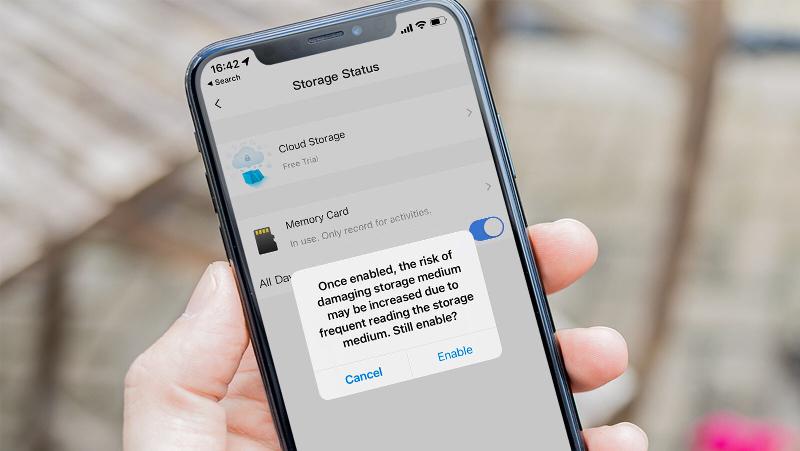 The bad news is that the app doesn’t really like this mode: in my testing it appeared to have recorded continuously for a full day, but refused to play back any of it. Video thumbnails appeared on the timeline claiming to contain ‘clips’ but the app would only ever display stills.

If you don’t enable this mode, clips are recorded when motion is detected in the zone you’ve selected. Their length varies until a person or vehicle is no longer detected.

You can buy a C8W Pro for $149.99 from Amazon, and for those in the UK, the options are currently £130 from EZVIZ direct, or from Smart Secured or Connectec.

You can buy a microSD card, or use one you already have, for local recording – up to 256GB, but if you want a more secure option that ensures video evidence can’t be stolen, there’s Ezviz CloudPlay.

These are uncompetitive when compared to Google and Ring which offer much cheaper annual plans and cover unlimited cameras.

For alternatives, see our roundup of the best security cameras to buy.

The C8W Pro is designed to address some of the criticisms of cameras that came before it, such as moving the antenna inside the camera body and automatically tracking subjects as they move around.

But other criticisms, particularly surrounding the disappointing app, remain. And as the C8W Pro costs considerably more than the C8C, the problems are harder to overlook.

It’s great that there’s the option to buy your own microSD card and avoid paying a subscription for cloud storage, but the C8W Pro just isn’t smart or slick enough to recommend over its rivals.