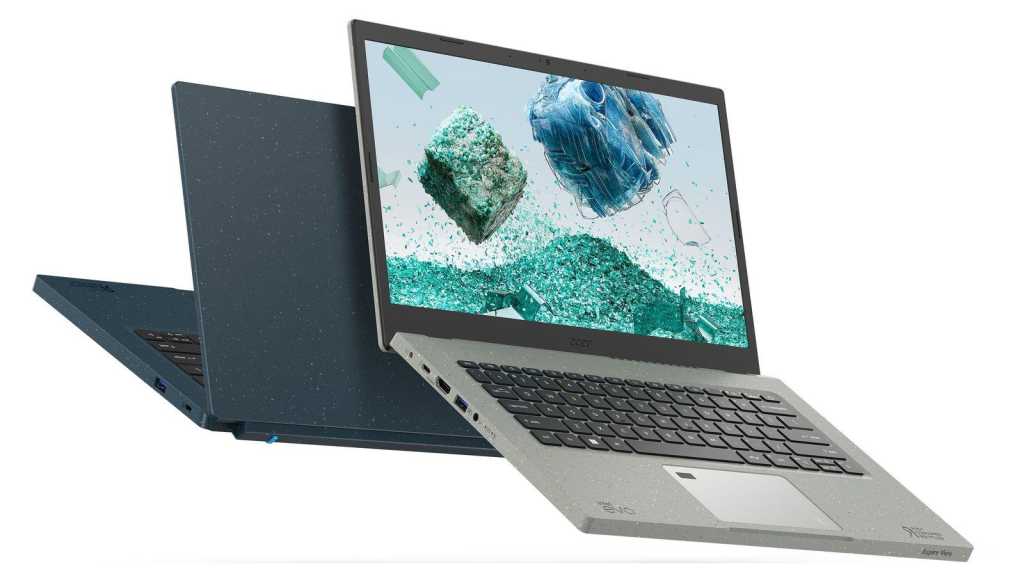 When Acer debuted its Aspire Vero laptop late last year, focused on sustainability, it was widely expected to be the first of many. That’s proven to be the case, with the Taiwanese company unveiling several new Vero products at its May launch event – including two new laptops.

Alongside the existing 15.6in model, it means the Aspire Vero is now available in 14in and 15in sizes. It’s a subtle change, but could make a big difference for people in the market for a more compact device. On both new versions, it’s a Full HD LCD panel, but there’s still no touch support or high refresh rate.

The other main upgrade on the 2022 models is one you were probably expecting. Both are powered by Intel’s latest 12th-gen processors, which weren’t available when the original Aspire Vero launched. You can choose between the Core i5-1235U and Core i7-1255U, alongside Iris Xe integrated graphics, 16GB of RAM and 512GB/1TB of SSD storage.

There are also new Mariana Blue (14in) or Starry Black (15in) colour options and a generous port selection, including Thunderbolt 4-compatible USB-C and USB-A.

But the big appeal of the Vero range is its sustainability credentials. Acer says the chassis of both new laptops uses 30% post-consumer recycled (PCR) plastic, which it says saves 21% on carbon emissions compared to a regular plastic version.

You’ll also find PCR plastic within the screen bezel (30%) and keycaps (50%), plus a trackpad made using ocean-bound plastic instead. The company will want to improve these figures in future versions, but it’s a good start.

Acer is also making it easier to repair or upgrade the Aspire Vero range than regular laptops, prolonging their lifespan. The bottom cover can be removed using standard screws, making replacing the RAM or SSD simple.

The new 14in and 15in Aspire Vero laptops are identically priced – £799/$749.99. Both will be available in either August or September, but a more specific release date isn’t yet known.

However, those aren’t the only additions to Acer’s eco-friendly range. The Veriton Vero 24in all-in-one, 23.8in or 27in Vero monitors have all launched, alongside a new projector and keyboard/mouse. All the new products focus on reducing the environmental impact and prolonging lifespan.

Aspire Vero laptops run Windows 11, but what if Chrome OS is your preference? Acer also announced new Chromebooks at its May event, with two convertible PCs and a new tablet all being revealed.

The Chromebook Spin 514 and Spin 714 have plenty in common, including a hi-res 14in LCD touchscreen, built-in stylus and 360° hinge. You also get a decent port selection (including USB-A, USB-C and HDMI) and up to 10 hours of claimed battery life.

But aside from subtle design variations, the main difference is under the hood. The Spin 714 uses Intel’s latest 12th-gen chips (up to Core i7), while the Spin 514 opts for AMD’s older Ryzen 5000 Series rather than the latest Ryzen 6000 Series. My brief testing time didn’t allow for direct comparisons, but most people will be happy with either.

By contrast, the new Chromebook Tab 510 opts for a processor from Qualcomm. Specifically, it’s the ARM-based Snapdragon 7c Gen 2, which allows for 4G connectivity but not 5G. It helps power an 11in Full HD (1920×1200) display, while you also get two camera lenses: 8Mp rear and 5Mp front-facing.

Acer claims the device will last for up to 11 hours on a single charge but doesn’t specify how fast charging actually is. The built-in stylus is still here, but you’ll need to pay extra for a Keyboard Folio case.

But the tablet itself remains affordable, starting £399/$399.99 when it arrives in July.

All three Chrome OS devices could be contenders for our Chromebook chart, but Vero laptops face a lot of competition from the in our laptop chart.